This slide, everyone, actually came about when I had trouble with this code 436 stroke syndrome, because if you’re not familiar with strokes it’s really easy to get confused. So, real quick, let’s go over what stroke syndrome is: a condition with sudden onset due to acute vascular lesions of the brain (hemorrhage, embolism, thrombosis, rupturing aneurysm), which maybe marked by hemiplegia or hemiparesis, vertigo, numbness, aphasia and dysarthria, and often followed by permanent neurologic damage.

You’re saying, “Oh well that’s a stroke.” Now this is just stroke definition from the Mayo Clinic: a stroke occurs when the blood supply to part of the brain is interrupted or severely reduced depriving brain tissue of oxygen and food, within minutes, brain cells begin to die.

So, when you look at the difference in the two, the stroke is a sudden attack. Stroke syndrome is more about happens to the patient after they’ve had their stroke – if that makes sense. 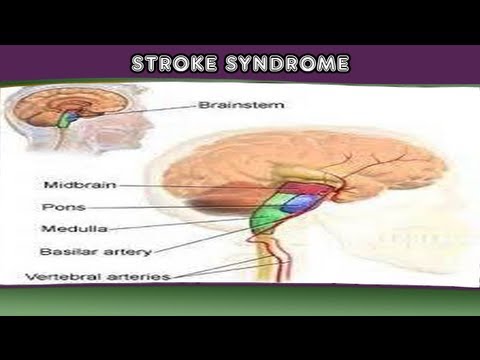 There’s a few more Excludes. When you’re looking for your right code, you really want to research and make sure that there’s no underlying Excludes in there. Pay attention to the parenthetical, the Includes and the Excludes because one word can make a huge difference in what you’re coding.

Now, if we scroll down just a little bit, there’s a great picture that I found from a doctor and it’s a little fuzzy because I enlarged it. This is an example of a stroke syndrome. So left dominant hemisphere, so they’ve got deficit in their field of vision; they’ve got hemiparesis – in other words they can’t move; left gaze preference… I thought that was really interesting. I had no idea about that. And aphasia, and I think… Is there something at the feet? I don’t know if there’s something down at the bottom of that. Scroll just a little bit farther.

So, what’s the difference between 436 stroke syndrome and 434.9x, or whatever goes with that, this two other ones. When you pull those up, (.90) cerebral artery occlusion unspecified without cerebral infarction — That’s saying there’s no brain death, but we got an occlusion. Something is going to happen but there is no death of the tissue yet.  And (.91) same thing, but we have death of the tissue. That’s the difference.

So, when you’re thinking after the stroke, you probably are going to have 436, but as the person has the stroke or when they come in to the ER, when they’re in the hospital and they’re being treated for that acute stroke, it’s going to be the 434.9x something, most likely. That’s the difference.

And when you see that, what you’ll see is the 436 is not going to be in an acute setting. So, your patient comes in and you’re reading the past medical history and you’re seeing this problem list and stuff, eventually the doctor is going to put in their 436 instead of 434.91, if there’s a deficit that is attributed to the stroke for the patient. That’s the difference. It’s kind of hard to figure that out when you’re doing the coding because everybody knows usually the code for a stroke 434.9x. And that comes to mind first, not the 436.

All right, thank you ma’am.