The other part of the story that we need to think about is “3 of 3” versus “2 of 3.” That’s very critical to getting the right levels. If you look here, it says, “which requires these three key components” and you’ll notice it says that “for each and every single description.” So this is a subcategory that the E&M guidelines are telling us that we have to meet or exceed every single bullet in order to code it; so, for example a level five, we need a comprehensive history, comprehensive exam and high medical decision making. If we only have moderate medical decision making, then we have to bump down to a level four, because we meet the first two bullets, but we don’t meet the third bullet; so we got to go down to the lowest one.

And that’s what this little rhyme is: When it’s 3 of 3, code to the lowest – the lowest is always going to pull it down because of this which requires these three key component statement. So, look at that again. Let’s pick another one, what if you had a DCH? What you’re going to do for this system, DCH (detailed history, comprehensive exam, and high medical decision making); so when you look at that, what I do is I say, “OK, the D shows up at a level 3.” I’m not assigning a level three yet, I’m just saying, “So far, it’s a level three.” The “C” makes it a level four and the “H” makes it a level five; but if I try to make it fit a level five, the first two bullets don’t meet or exceed, so we have to scratch that one off. If we look at the level four, we only have 2 of 3 bullets, so we have to code to the lowest, it’s going to be a level three.

So that’s why the saying is: When it’s 3 of 3, code to the lowest. If you had a PCH, you got to code it on level one even though the other two elements are level five. Now, hopefully, documentation won’t be like that because that means a physician needs some education on documentation. Normally you’ll see them stair step along with each other, but there could be some wild permutations that way. 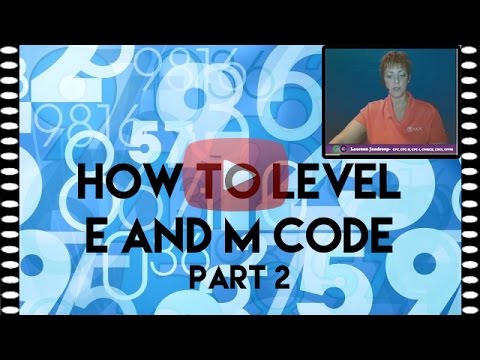 Then, say, it’s an established office patient; this phrase says “Which requires two of these three key components.” When you have that, then you can drop the lowest and code to the next lowest. So, in our example we just did, we could drop the level three and we code to the next lowest, which is a level four. I’m going to show you how that works. This is a leveling exercise that I’ve been using since 1999 to teach EM coding and it really works. I tell the students we first start doing this, they’re like, “What?” and they’re looking at each other’s papers, but after about ten minutes of doing this, they’re like, “I get it. I get it,” they just start clicking. If it’s not clicking for you in this small, little segment, really it’s a good system, get the On-Demand class and you really work it out and you’ll see the light bulb will go off. What it does, too, it helps you, if you had access to E&M tools, like those slide rules and different things like that. When I first started coding, I was collecting all that stuff, I couldn’t figure out how to use it. I was like, “I don’t get this.” But once I learned how to do it in my manual, then all those tools made sense and I could use them effectively, so it just helps you be a better coder and even understand how encoders work in E&M scoring tools and that sort of thing.

Here’s how I do it, I just took permutations of the letters and rather than stacking them on top of each other, I wrote them horizontally. So, my PEL, for example, is problem focused history, expanded problem focused exam, low medical decision making. And in hindsight, I should have done a poll for this.

Alicia:   Good idea to have a poll.

CCM – Here is a situation where the “C” shows up on a level four and a level five. When that’s the case, we always give the physician the most credit for what he documented, so we’re going to temporarily call it a five. The second “C” for the second bullet for exam, we’re also going to call it a five. And the “M” shows up on a level four. Now, of course, you probably say, “Well, Laureen, it’s right here, CCM.” Yeah. Probably on the board exam though, you won’t get one that’s exact, they’re going to make you work for it. But that one happened, it matched exactly; so I didn’t have to do all that –that leveling rigmarole but we’re going to call it a 99204.

CCS – Not to be confused with the credential is going to be a five, five and the “S” because it shows up on level one and level two, we’re going to give it a level two. We give the doctor the highest credit for what he/she did; so 99202 is the answer for that. So, hopefully, that’s starting to click.

So, that’s how you code a new patient.

That’s how you do leveling, “2 of 3” versus “3 of 3.” Just convert the bulleted statements into letters and then take those letters and confer them into the numbers. Now, what you end up doing once – this is like training wheels on the right, it kind of gets you used to the method. And then when you go to the board exam or if you’re using your books to do E&M coding, I start using my fingers. I’ll say, “OK, this one is at this level, this is at that level, this is at that level.” And then I say the rhyme, “When it’s 3 of 3, code to the lowest,” and then wherever my finger is on the lowest level, that’s the code. I know that’s the answer. If it’s 2 of 3, I say get rid of the lowest, what’s the next lowest? And you start doing it real quick in your mind and you don’t need the training wheels or whatever you want to call it.

Going back to my sheet here, you can see now a system for when you are on the board exam or again real world E&M coding, figure out your location; get in the right category and sub-category. For the example I use, we pick “office” and then we did “new” and “established.” Then, abstract from your scenario that they’re giving you what the level is – P, E, D or C – and you can look in your E&M guidelines to figure out how to determine those levels, so that could be a whole another conversation. But the question asking me for this was to how level.

The leveling helps, by the way guys, when you go to do History coding. There’s three pieces to History and you need to code it 3 of 3; whereas, for Medical Decision Making, there’s three pieces and you need to code it 2 of 3. So, once you become a good leveler with this high level, then you can do the more minute been counting kind of stuff, and it all come together.

And so, it’s just kind of an opposite way of teaching E&M. Oftentimes, when I was first coding and I would attend sessions on E&M coding, the presenters would always start from the details. “OK, we’re going to start with History” and they would break History all apart, but it didn’t get where I was in context. So, by doing it from this way, I take the higher view and work down. It just seems, for me, being a visual person; I knew where I was in the context of figuring out an E&M note. So, hope that will help you with that.

AAPC – Teach E/M Coding to Your Doctor in One Hour