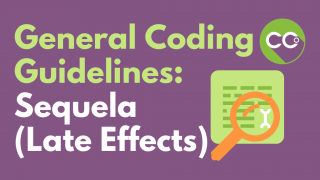 In this article, we’re going to go over three (3) example cases and assign them the sequela and late effect.

As a reminder, a sequela is the residual effect (condition produced) after the acute phase of an illness or injury has terminated. There is no time limit on when a sequela code can be used. The residual may be apparent early, such as in cerebral infarction, or it may occur months or years later, such as that due to a previous injury. So, if a person was to get sick with a disease and after the disease is gone they still have problems, the leftover problem is called a sequela or a late effect. Let’s jump into the 3 examples we’re going to use:

This is in regards to the general coding guidelines of late effects or sequela now in ICD-10.

Let’s try our second one:

This is the same concept as the last example. Try to use the same reasoning to identify what’s the sequela and what’s the code.

Ok, what is the first code for the traumatic arthritis in the right ankle joint? The correct code is M12.571.

What is the second code or late effect of the fracture, the previous nondisplaced lateral malleolar fracture and that’s the sequela… we haven’t found yet? Believe me, this will all be worth it. I know it might feel a little overwhelming right now and still brand new. Again, I will reiterate this is material you will need to read more than once and in order to understand the information you have to apply the information, do the exercises, perhaps 2, 3, 4, 5, 6 times.

Sequela Case #3: Oropharyngeal Phase Dysphagia Due to Cva 3 Months Ago

What is our first code? We’re waiting for the code for oropharyngeal phase dysphagia due to CVA 3 months ago. Pay attention to your instructional notations in the Tabular. Let’s identify what’s the sequela and what’s the code.

Well, R13.12 is the correct code and your I69 code is the one that needs to go first, and you would know that by reading the Tabular; so I69.391 and our R13.12. The actual dysphagia is R13.12, and the late effect sequela is I69.391, but that is told by the instructional notations in the tabular to sequence first. That was a little trickier. Any questions on that one? If so, please post in the comments.