Q: (HCC Coding and Drawing Lines) – You talked about drawing lines before when doing HCC coding. Can you give me an example of how to do that?

A: Well, you bet I can. So, we can abstract a case and I’m going to show you how to do that. I actually found a case and wanted to give you an idea of how to do that… Here’s our case and what I did was I highlighted the keywords that we’re going to be looking at. We’ve got a 65-year old male, he’s on Medicare.

What is he being seen for? He is being seen for a follow up with a backache. So, that is his chief complaint. He is also following up on hypertension, but it’s controlled with medication. He stated that he had chest pain, the patient states it goes to the right side of the neck and gets headaches.

No, I’m not going to read all of this, I’m going to just highlight that, otherwise, we’d be here all day because it was a relatively long case. So, then, as you’re doing the HCC coding, you’re going to start looking at the HPI – what’s going on. Now, as I scan through this, this is all about one thing and it’s about GERD; he has reflux and GERD.

The three main things that I’ve seen at this point is, we have got, for diagnoses, we’ve got a backache, we’ve got hypertension, and we’ve got GERD. Now, remember the HPI is what the patient is telling the doctor, pretty much. He has chest pain and he’s got angina that the patient is describing, as well.

Now, the way you draw lines though, is that next, I’m going to go down to the bottom – I usually work charts backwards anyway because you’re going to look to make sure it’s a valid signature and stuff like that – so I’m going to go down here and I’ll say, “What is the doctor saying he is assessing, or the assessment and the plan is going to be?” We have chest pain, unspecified. 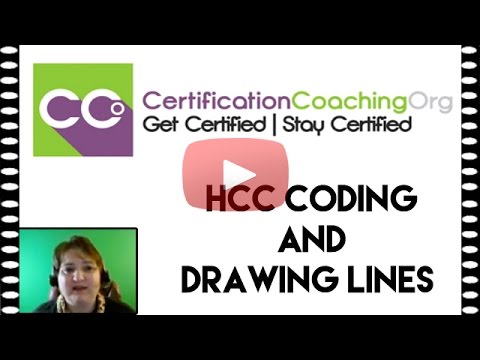 I can draw a line right away because, look, this is excellent, he is running labs. So my line is telling me that he has a current condition, it’s chest pain, that’s his diagnosis and here’s the labs to support that this is a current condition. Now, he has given him a medication, this Dexilant. If you don’t know what Dexilant is, you need to go and look it up, but it is actually for heartburn. It’s a pump-inhibitor type medication. They’re going to go ahead and do a cardiac diagnostic test. Now, this right here gives me a line for GERD.

Now, I’m going to scroll back up and I had already gone through all of this stuff, the Review of Systems and the Exam. The things that jumped out at me because I’m looking for those diagnoses, he has hypertension; well he did check his rate and rhythm was regular. That gives me a line. He checked the carotid arteries – because you do that when there’s anything to do with cardiology as well as blood pressure. Most all of this stuff is fodder. I don’t need it, I couldn’t pull anything from that; so I would be skipping that.

Now, let’s say his blood pressure was 218 over 179, even though we know that’s high blood pressure, we aren’t able to come to that determination. We are not a physician, that’s not our job. What our job is say, “Look, he checked the blood pressure, and got a result” so there’s a line. Now you can even go in so much as, “Look, he took the time to take a family history and there is hypertension and heart disease, all kinds of stuff going in.” If he had something other than heart disease or some kind, that would be your line.

Now, here, we also see GERD, yes. He’s got a past medical history of GERD as well as back problems. So, as I’m going up, I’m not seeing anything until I get into the medications, which is an excellent place to draw your line. What is this particular medication? I just happen to know that cyclobenzaprine is a muscle relaxant; if you don’t know that, then you need to go to, like, drugs.com. This, I happen to know that

Dexilant is a pump inhibitor, they give it to people with heart burn and GERD and stuff. Hydrocodone – that’s a pain medication. Lisinopril is an ACE inhibitor, people take that for blood pressure. And Lyrica is an antiseizure medication, but it also is used for people with fibromyalgia or people who have nerve pain, they’re given Lyrica. So that can draw a line to other diagnoses.

I go back here and I think that’s just about it. When you’re HCC coding, you’re not coding this document like you’re coding a regular encounter. This encounter is long gone. So, somebody’s already gone through and coded it. I’m looking for chronic conditions that are listed, that I can pull to say that this patient is actively being treated for these chronic conditions, not what was the diagnosis per se, but things that were mentioned. So, it’s not the same as coding for the reimbursement from the insurance company.

Now, what did I come up with? Well, I came up with only two things that carry HCCs and that is the GERD and there’s the 530.81 and there’s the ICD-10 codefor it and there’s the 401.9. Neither one of these carry a regular HCC; however, sometimes you’re contracted out at certain times to collect not just the HCC but the RxHCC, which literally means they’re taking medication that MA Plan is having to pay out additional money for the prescriptions that they’re taking and this carries an RxHCC-68 and one of 187. So those would be able to be captured, even though the doctor did not say here that the patient had GERD, you know what I mean? But I can prove that he is actively being treated for GERD and actively being treated for hypertension.

So, that’s how you do it, that’s how you draw the lines. That is just a little snidbit of what an HCC coder does when they’re abstracting the information off of an encounter. You would not be looking at just one encounter by itself; I would have all encounters that this patient had for an entire year. So, there you go!

Again, this is really fun, we have our fantastic course on HCC that not only tells you how to do this, but it also tells you why you’re doing that, which is even more important. Just abstracting these diagnosis codes and that knowledge that you get, that’s something you get with time. But the other information is very heavy, and why do we do this?

Laureen: Before you move off this slide, Alicia, we had probably 20 people say – what is HCC? So if you could explain that real briefly to help them.

Alicia: It’s Hierarchical Condition Category. You’re collecting codes, you’re collecting diagnoses for conditions that are chronic, like, diabetes, COPD, any type of diabetic manifestation, end-stage renal disease, CKD – all of those chronic conditions that caused the Medicare Advantage Plan’s money. And so, they’re just projecting, when you’re saying HCC, think chronic conditions. They have a hierarchy in them, some pay out more money than others because it caused more money to take care of a person that has COPD than it does for a person that has asthma, or emphysema. You know, somebody that has type 1 diabetes versus type 2 diabetes, and they’re projecting. Everything that you code for the patients this year affects reimbursement for next year in this. If everybody is on an MA plan, if you’re on Medicare, and that’s who is collecting this information is the MA plans.

Laureen: And I just put a link in the chat for you to watch later, but that’s a YouTube video of Alicia explaining what HCC coding is more at length.

Laureen: That’s an older version, she just did a new one, but go ahead and start with that and stick with us and you’ll hear more about it. We’re real excited about the HCC front.

Alicia: Very good. Just as we’re going into the next slide, I wanted to mention that for being hired as an HCC coder, it comes in waves because they have three pulls a year, especially at the end of the year, they always panic to get everything coded and out to the MA plans. So, some places you work all year long and in another contract you might work 3 or 4 months at a time and then have a month off, just so you know.

Find out More Details about HCC Coding and Drawing Lines