Q: [HIV Codes ICD-9 (and ICD-10) Codes] On the HIV codes, when do you use the V code versus the O code? Would you code the patient as being active if they have a history of it?

A:  I will let you know that Tammy started this slide and I had said, “Oh, I really like talking about this. Can I have this one?” and she was gracious enough to do it. She started it and I added some other stuff.  First, there is not a “history” of HIV. If you are HIV positive or if you have AIDS it is never going away. A history is not a valid statement because “history” signifies that you used to have it but you no longer have it or no longer getting active treatment for that. If a patient test positive for HIV, there is no cure. That would be like saying a person had a history of an amputation. Their leg did not grow back.

If you look at the guidelines and this can be found in Section II, Chapter C, 2, a; it tells you to use 042 if the patient has HIV with an HIV-related condition. Now, everybody says, “What is an HIV-related condition?” I am going to show you some of those here in just a minute.  Then, it goes on to tell you in that same area, not “a” but in “d” you will notice that it says to use V08 when the physician uses the term such as “HIV positive.” “HIV test positive” might be the verbiage you would hear or “known HIV.” Unless the term AIDS is used then you would code 042. 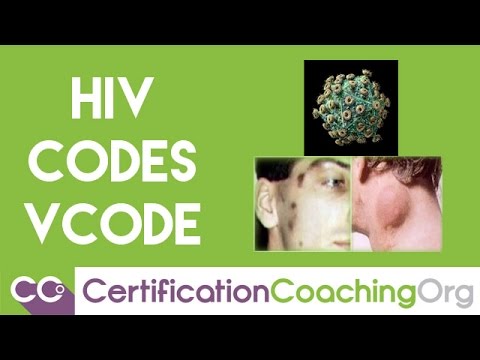 Being HIV positive is a stepping stone to AIDS, but it is actually two separate conditions and you do not want to miscode this. It is like giving somebody diabetes. You cannot get that off the record, and being HIV positive versus having AIDS changes everything.

Z21 is the code for HIV positive. The person does not have AIDS, they are HIV positive. What I did was I actually pulled this straight from, you know that manual I told you that I like earlier in the webinar? I have it online as well. I actually copied and pasted that. That is why you see this Carol Buck. It is on page 1677 in the Carol Buck ICD-10 2015.

Notice the EXCLUDES. In ICD-10, you have Excludes1 and Exclude 2, but it is telling you that this is excluding somebody that has AIDS which is B20 and I will show you that. Then, do not get this confused as Z21 with being exposed to the HIV virus, which is Z20.6. Just because you have been exposed does not mean that you are HIV positive.

If you have AIDS it is B20, but if you had a lab test and it is inconclusive, then you are not going to be a B20 or a Z21, you are going to be an R75. That means that they do not know. You went and had a test but something happened and they are not confirming that or I guess you could say confirming or denying, but you are classified as an R75. They did a test and you do not know.

What turns this Z21 HIV positive into full blown AIDS, which is B20, and I will show you. Right there in the ICD manual for Carol Buck, and one of the reasons I really like this manual is it gives you all these extra information and I do not think the other manuals do, but it tells you these three conditions that will turn HIV positive into AIDS.

One of these is this Kaposi sarcoma where they get this black, more or less, lesions, black spots on their skin. It is described as large confluent hyperpigmented patch-stage lesions with lymphedema. Again, you can see a picture of that on page 761 of 2015 Carol Buck. I pulled this one off the internet because I was not able to pull the picture from the ICD manual like I was able to pull these statements because I am sure that there was not a link there.

Another thing that can do that is this little virus right here, and this is a PCP type of pneumonia. It is not the drug. This is the actual virus, Pneumocystis carinii pneumonia (PCP). That particular type of pneumonia turns HIV positive patients into AIDS. Then, we have the Kaposi’s sarcoma and then we have lymphoma, which all of these are AIDS-related complex, which is abbreviated ARC.

I will show you this other one, there is that lymphoma. The lymphoma, it runs the lymphatic system and so you will see swelling in the lymph areas, under the armpits, behind the ear, wherever you have lymph nodes which is really quite a few places in your body. This is actually what that little pneumonia looks like. It gets in the lungs and starts shutting down the lungs.

Any one of these three conditions, again, turns HIV-positive people into AIDS. You might expect a question, like: Mr. Smith comes in to get the results of his lab work. He is HIV positive and he has had a persistent cough for the last three months. An X-ray is done and he is diagnosed with this PCP. And again, they will have your four choices and you will think, “Well it is HIV positive, he is HIV positive.” But no, he has an AIDS-related condition which now makes him a B20 that he has AIDS.

This is also in your ICD-10 manual if you get the Carol Buck one from Elsevier. It says: “Acquired Immune Deficiency Syndrome,” which that is what AIDS stands for, “is caused by an HIV (Human Immunodeficiency Virus).” Again, you can be HIV positive and not have AIDS. “HIV affects certain white blood cells,” and this tells you what type of cells, “and destroys the ability of the cells to fight infections.” It is an immunodeficiency disorder. It makes the patient susceptible to all kinds of infections, and the main ones, these three are pretty common with people who have AIDS.

Last, just giving you more information about AIDS itself is, and it being B20. This INCLUDES, you might see terminology like this: Acquired Immune Deficiency Syndrome which is AIDS is the acronym, AIDS-related complex (ARC) – if you see that, that means that they have full-blown AIDS. HIV infection symptomatic – symptomatic means they have symptoms of AIDS, meaning one of these diseases; asymptomatic, “a” stands for “without” and so if they are asymptomatic they are HIV positive but they have no symptoms of AIDS.

Also, if the person has the HIV and there is a little note about pregnancy, and then it says, “Use additional code(s) to identify all manifestations of the HIV infection.” If that particular scenario I told you about earlier that might be a test question, then you are going to code the PCP, that particular type of pneumonia you are going to have the B20 and then you will have the PCP code.

This EXCLUDES1 is telling you if it is asymptomatic, you are going to code Z21, not B20. If they had just exposure to AIDS or the HIV virus, Z20.6 is what you code, and if they have had an inconclusive lab work done that is R75. The manual tells you and reminds you, heads up, pay attention to these.

Just to recap real quick, it is very important that you do not give somebody a diagnosis that they don’t have, so don’t give them HIV if their lab work is inconclusive, do not give them AIDS if they are only HIV positive. That’s a look in the ICD-9 and the ICD-10. Again, that will be in your proficiency exam. It is on a question regarding HIV and AIDS, is almost always on the testing because the guidelines are so important they want to confirm that you know those. 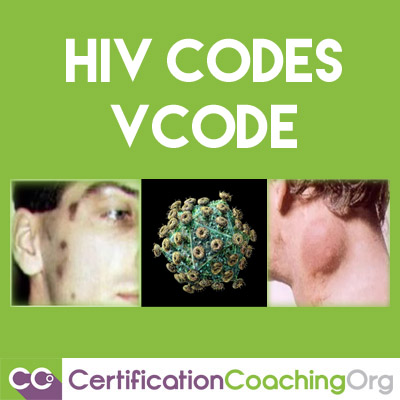