Okay, I think we have time for one more, HIV coding versus AIDS coding.

Alicia: This is one that the students always had a problem with. I remember I really enjoyed talking about this too because it’s a question that comes up over and over again. So they have a practice question that they had that they got wrong. There’s a 20-year old HIV positive patient was admitted to hospital observation bed by his PCP for stomach cramps and diarrhea. After tests were completed, the PCP determined that his stomach cramps and diarrhea were a result of staphylococcal food poisoning. Select the appropriate diagnosis codes for this patient. They even gave us a list of choices. Now after I go over some of the basics, you’re going to be able to just eyeball this and be able to pull out the correct code really easily. 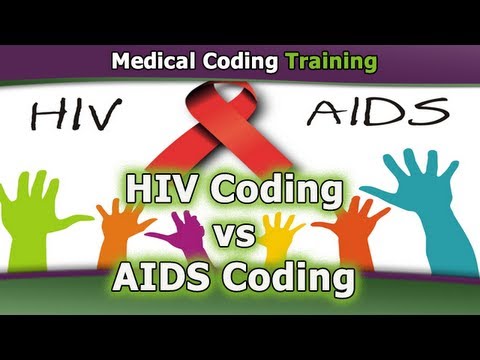 So I repeated the coding question. There’s the questions, okay. The first thing you need to ask yourself: Does your patient have HIV or AIDS? Because it’s two separate codes. If your person has AIDS, it’s a V08 and it has to be confirmed. If they are HIV positive, it’s 042. You never want to give your patient AIDS unless it’s confirmed because remember, not only are you diagnosing or you’re using these for diagnosis for the provider but it’s also for statistics. And also, like we had talked about with diabetes and stuff, once you give somebody a diagnosis, it’s really hard to get it taken off of their record. So it’s two separate things, HIV is not AIDS.

Now, what made your patient sick? Okay, staphylococcus was 005.0 when we looked it up. Did I spell that wrong?

Alicia: And let’s see, clostridia is 005.3. Now is it an AIDS-related diagnosis? That’s the next thing… another thing you need to ask yourself because there are certain things that a person that’s HIV positive that once they get one of these other diagnoses then their HIV is automatically turned into AIDS. And that’s all in your guidelines but I’m not going to try to pronounce those specifics. They are in the guidelines in your book but this particular type of pneumonia and this Kaposi’s sarcoma and stuff, that’s a type of cancer. If a person is HIV positive and they get this diagnosis, those… that means their HIV has turned into full blown AIDS. So our person doesn’t have that. They have a staphylococcal bacteria that’s made them sick.

The most important thing you need to know is placement and your guidelines are very clear about placement on HIV coding and AIDS coding. So if a person is admitted for HIV related condition, the 042, it’s coded first and the condition, second. If a person is admitted for non-related HIV, the 042 condition, it is coded first and the HIV second. So what this means is when you know, number 3 is then A and D are the selections, you can throw those out because your person came in for food poisoning and they have HIV. So it’s not an HIV-related or AIDS-related diagnosis. It has nothing to do with the AIDS or I mean, the HIV. So the 042 is not going to be coded first. And when you look at those lists, two of those had the 042 first and the other two had them second. And then you know… then you can go in and you wouldn’t do the HIV and the V08. It all boils down to… that you can throw them out and C is your right answer. 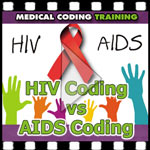