Alicia: This was really an interesting question about burns. We’ve covered burns before, but this was unique.

Q: “If I have a patient with more than one burn site with multiple degrees, how do I code that? Now, what will happen with 2nd degree for both anatomical sites? Do I go to a higher percent? What if there’s no percent that is mentioned? What if both anatomical sites had burns with the same percent?

A: I kind of broke this down for us.

First, what you need to know about that is about burns. Again, we’ve covered this before but the basic thing is according to the ICD-9 Guidelines that when you’re working with burns, you need to know a few things before you start your diagnoses: the location and anatomical site of the burn, the extent and severity of the burn, the percentage of the body surface that is burnt, and the cause of the burn. That last one involves E-codes so I didn’t really cover that. 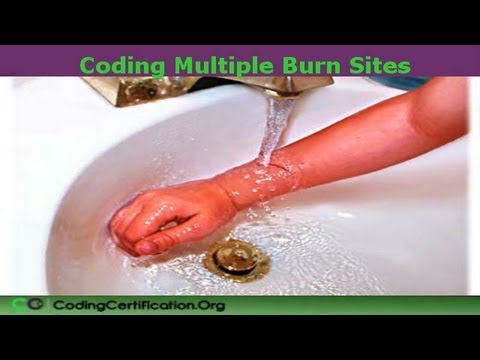 So, where’s the burn at, how deep is the burn, and what percentage of the body is burnt? And that goes into that rule of nines, you probably heard about. Let’s cover the first question: “If I have a patient with more than one burn site with multiple degrees, how do I code that?” Well, it’s a simple answer.  If the patient has multiple burn sites, you code first the highest degree of burn. If they have a third-degree burn on their hand and a second-degree burn on their chest, you’re going to code the third-degree burn first, this is more severe. That’s the way it is with most coding in the guidelines, is you always go with the most severe of anything that’s going on.

What if there is no percent that is mentioned? What if both anatomical sites had burns with the same percent? Now, some people may say, “Well, you know, that’s probably not going to happen.” But, actually, this can happen and it has a lot to do with documentation. You can’t code something if it’s not documented. And if somebody comes in and they’re in the E.R. and let’s say they’re going to ship him off to the University Hospital because it’s so severe and the doctors making notes and stuff that it’s not clear, you can only code with the information that you have.

You have a couple of options here: you could go with the first listed burn on the notes. Usually the doctors are trained to always go with most severe and work down, and so that is probably what I would do. Or, and this is just me and I don’t remember where I heard this, but I would start at the top of the body and work down to the feet. There’s really no right or wrong answer there, but most likely you’re going to go with what’s listed first by the doctor in the listing because his thought process was, most likely list the most severe..

Let me tell you, it doesn’t come out like some of those questions you get in textbook and stuff.  In real life, when someone has been burned, this happens all over, and so you’re going to see multiple codes like these.

I’ve got this off a great site. Especially the people on the Replay Club, I footnote of the website, and they have some really good information about that. They weren’t trying to sell anything; they’re just an informational site. I like the way they were to those. But that’s a little bit of breaking down burns when it gets a little more complicated, not just your straightforward or what we’ve covered before maybe in burns. 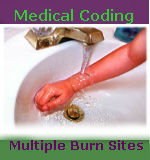