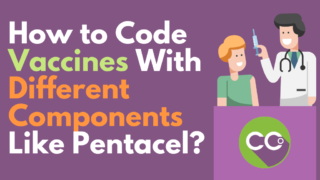 The question was, “How do we code for vaccines that have lots of different components in them?” Pentacel is a great example of this.

Pentacel is a vaccine used to improve immunity against diphtheria, haemophilus influenzae type B, pertussis, polio, and tetanus, all serious diseases caused by bacteria or viruses.

So Pentacel has quite a few vaccines bundled into it. Well, the guidelines in CPT actually tell you that separate codes are available for combination vaccines and it is inappropriate to code for each component. Instead, you’re supposed to use that designated combo code. If there isn’t a combo code for the vaccine you’re trying to bill for, maybe because it’s a new vaccine, it says use the unlisted code until that new code becomes available.

For example, Pentacel, would use code 90698 which includes all of the different components of the Pentacel toxoid.