Alicia: . I just did an ICD-10-CM course with the AAPC and because I’m a CPC-I like Laureen did, we have been able to go ahead and take the proficiency ICD-10 exam and that’s what you guys will be taking in 2014. You know what, you’re not going to have any trouble with it.

I think that it’s not the challenge that everybody is scared about. The closer we get to 2014, there are so many resources out there besides our… we have our mini courses and we have a full course in ICD-10 soon too. But there’re a few little things that you need to prepare for. One of the things is that you no longer are using just numbers when doing ICD-9. You had 401.9 was hypertension and you never saw in an ICD-9 code a letter; so they’ve changed the terminology and it’s no longer digits, but they’re going to call them characters. That is because you’re going to see numbers and letters.

So, with that being said, there are some letters and numbers that get a little confusing. I made a note of a couple of them. The number zero and the letter “O” when you write those together, nothing distinguishes them apart. And sometimes, when you’re typing, it doesn’t distinguish them depending on what fonts you’re using. And I know some of you know this because after the webinars, or if our students get an access code to something special and if it has a zero and an “O” or vice versa, it can get very confusing. 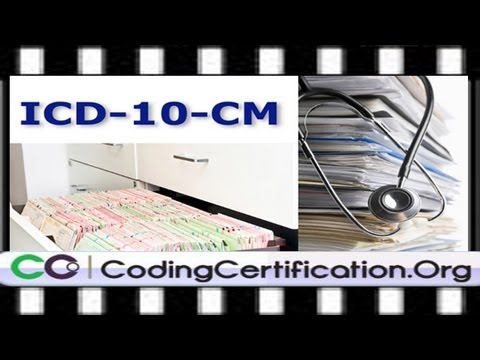 Now, another one is the letter “Z.” Surprisingly, some people make their Z’s look like 2’s. And so, that can cause a problem. Z5S, you would be surprised when those are written how some people are – they just look a little [two somewhat]. The number 7 also often can look like a 1 for some people. So, what you’ll see with ICD-10 and what I was teaching my students at the college is to learn how to strikethrough certain letters. The number zero, if you run a line through it, or make it look like a nut symbol, then every time that you write a number versus a zero, you’ll never be confused which is the letter O and which is a zero. Also, “Z” if you use a strikethrough then you’ll know for sure that it’s a “Z” and not a 2 or messy 5. You think that they wouldn’t confuse them, but I’ve seen some really interesting handwriting. And 7, I always strikethrough a 7.

You’ll see why this can be very confusing. Look for: “Encounter for general adult medical exam/s abnormal findings.” And we made fun at the college that this was ZOO. So, if you remember zoo, you’ve already memorized one ICD-10 code. And of course: “Encounter for general adult medical exam…” You’re going to see that quite often, but all of those are zeroes and not the letter “O.” Just for your benefit, we put in Z00.01 which is the exact as Z00 except for its abnormal findings. So, you can imagine you’re going to see that Z00, as we say, very often.

What about this one? An abdominal pregnancy, that is the letter “O” and 0.00. So, absolutely, this could get confusing. What about D.05.xx – and how often do you see somebody write the letter “D” when it looks like a zero? That happens pretty often. What about O72.0? Have you seen people would write their 7s and their 2s and make them look almost exactly the same? So, if you use that strikethrough, then you don’t have to worry about that.

Another thing to keep in mind for ICD-10 and this is just some basic knowledge to look forward to, the characters whenever you see that X, like the carcinoma in situ of the breast. The reason that’s .xx is because you need additional digits. You remember how in ICD-9, there was always a little mark in your coding manual that tells you that you needed another digit? That’s the same thing the “x” is doing. They still do that in your coding manual. Your ICD-10 manual will tell you, you need a fifth digit or sixth digit or seventh digit, because ultimately, ICD-10 can keep going and going. One of the reasons we stopped ICD-9 is because we ran out of numbers, we ran out of space. So the “x” is very important, don’t let that scare you. If you see “A” at the end of an ICD-10, it means that it’s the initial encounter. A “D” is subsequent, and an “S” is sequela. That’s ultimately a late effect.

These are things that are going to be very common in ICD-10. They’ll be second nature before you know it. It seems a little strange now because you’re so used to ICD-9, but just some notes and we’ll try to add some more as we go along for different webinars, as we get closer to ICD-10. Just so that before you take your course, you’ll have a little background. OK? It’s going to be fun; you’re going to love it, guys. But get used to strikethrough some of those numbers.

Laureen: Thank you Alicia, and did you pass?

Alicia: Yeah, she did. 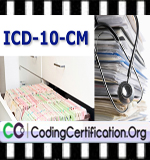