Alicia: ICD-10-CM Under Dosing Medical Coding – This is really interesting. There are certain things about ICD 10-CM that you need to be aware of so that you can assist your physician as the transition happens to say, “Hey! This wasn’t on your radar before, but ICD-10 has this now; and so, therefore, we need to change the documentation,” if you’re aware of it.

One of those things is drug under-dosing. This isn’t in ICD-9, but it is in ICD-10. So what is drug under-dosing? “Under-dosing is a new code in ICD-10-CM. It identifies situations in which a patient has taken less of a medication than prescribed by the physician.” Now, in ICD-9, you have a code for if a patient intentionally took too much of his medication, or if a patient wasn’t paying attention, wasn’t coherent and took a pill when they got up in the morning and then forgotten two hours later, took another one, and then the afternoon, took… There are codes to describe all of that.

But this is one that says the patient is not taking the prescribed dose, he’s taking less. It really works just like your poison codes, so if you’re familiar with how that works, you can follow those steps. And mind you, the Blitz has a fantastic description of how to handle that.

The medical condition is sequenced first – so, what happened? And I gave an example here, the gentleman who had a seizure. The under-dosing code is listed as a secondary diagnosis. The additional code explains why the patient is not taking the medication. This has never been available to us before. Not only could you not say, “Well, he’s just not taken his medicine.” How do you document that? “Well, why is he not taking his medicine?” “Well, he forgets.” That would deal with geriatric and give reasons why, maybe they need home health or interventions, or financial reasons. 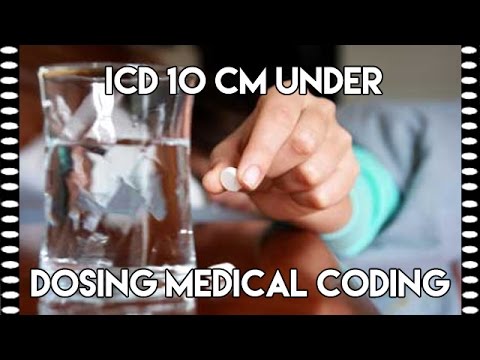 Laureen: Yeah, that’s a big one.

Alicia: Yeah, really big. So, as we look down, here I wrote these codes down. We’ve got R56.9, T42.0X6A, Z91.120. When I have done this before, obviously I made a mistake because I did a strikethrough the letter O. This is a perfect example of when you’re doing this new and first getting used to it, you want your letter O to have a definition between that and the zero.   [Ed. Note: the actual code is T42. X6A, and the character preceding the X is a zero. ]

“Mr. Green had a seizure due to taking his Keppra every other day to save money instead of every day.” My son takes Keppra, luckily we have insurance, but when I found out how much we would have had to pay, we’re talking almost $500 a month, if we didn’t have insurance. So, you can imagine if somebody was on Keppra and they had epilepsy or seizures, why they would be hesitant to pay the $500 a month.

So, we look at these codes, let’s break it down. We have the R56.9, unspecified convulsion. So, Mr. Green had a convulsion. Now, the T42.0X6A code here is poisoning by, adverse effect of and underdosing of antiepileptic, sedative-hypnotic and antiparkinsonism drugs, underdosing of hydantoin derivative – it’s obviously a medication, that’s the derivative, like, if you had an opiate or something like that – initial encounter.

So, this is the first treatment. Again, we can do that in ICD-10, that we couldn’t do it in ICD-9. Mr. Green had a convulsion. Why did he have a convulsion? He wasn’t taking his Keppra correctly. Why wasn’t he taking his Keppra correctly? Because he couldn’t afford it. That right there, now don’t forget and I’m always reminding people that why do we code? We code for statistical purposes as well as to get paid. But our number one reason for coding is statistics. What does that tell you? This will be able to tell you how many people are non-compliant with their medications because they can’t afford them. We’ve never been able to do that and we’ve been able to track initial encounters now.

When you get to the Z91.1 that tells you, in your code book, to code first underdosing of medication. It gives you a range. There again, it’s telling you the sequencing if you’re worried about it. This tells you how to find that code.

Z91.12 – Patient’s intentional underdosing of medication regimen – now, we’ve had intentional overdosing, like, they took the whole bottle but we’ve never had underdosing before.

And Z91.120 – Patient’s intentional underdosing of medication regimen due to financial hardship – and there’s more than one thing there. There’s the Z91.128 – Patient’s intentional underdosing of medication regimen for other reason. And maybe there’s another reason, maybe he intentionally doesn’t take it, which Keppra really has no side effects. But let’s say it’s a medication and it hurts your stomach, so instead of calling the doctor and telling him, “Man, I’m really getting this stomach cramps when I take this medication,” he just takes it less or cuts it in half, whatever reason. But now we have a way to track that.

Again, ICD-10 is amazing. It’s going to help us with our statistics in the U.S., which other countries have been doing this for years, and it’s going to help us better care, because if you know that your patient is not taking the medication because they can’t afford it, well, it’s documented so we’re going to find another medication or we’re going to get the social people in there to help them and let them know what their services are. They’re going to get better care. So this is really exciting. I really enjoyed this question.