ICD Working Diagnosis. CCO student asks, “Is it acceptable to code a working ICD diagnosis?” And they got that from their textbook that she’s working on. “For the ICD code, do you code the symptoms or the working diagnosis?” A very good question.

And for physician and outpatient coders, we do not code working diagnoses, only definitive ones. So if there is no definitive diagnosis, we code the signs and symptoms. It’s totally legal to do that as they’re being worked up. In inpatient, they are able to code the working diagnosis. So that’s very good thinking. 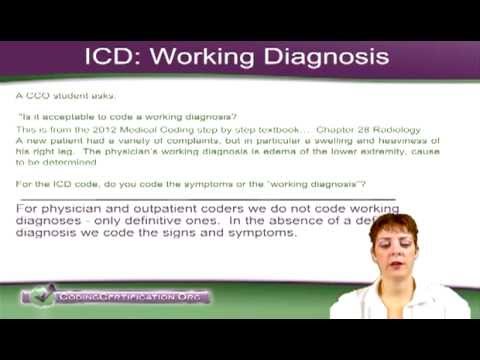 And how do we know this? Just because Laureen and Alicia say so? No. We’ve got our ICD Guidelines that you want to become familiar with. And I think I had pulled them up, here we go. And I think Alicia said it was Section 2… there we go. And then uncertain diagnosis, right?

Okay so hopefully, you can see that okay. It says, “If the diagnosis documented at the time of discharge is qualified as…” Is this what I’m supposed to be reading? No.

Laureen: Oh, in both places. I see what you’re saying. Alright, so age and certain diagnoses. If the diagnosis is documented at the time of discharge, it’s qualified as probable, suspected, likely, questionable, possible. We call it equivocal language: could be, maybe, kind of, sort of. Code the condition as if it existed or was established. This is what they’re telling inpatient coders to do, okay? So we want to go down to section 4.

Laureen: Okay, this is for outpatient services so physician in outpatient. In the outpatient setting, the term ‘first listed diagnosis’ is used in lieu of principal diagnosis. Okay, diagnoses often are not established at the time of the initial encounter. It may take 2 or more visits before the diagnosis is confirmed. The most critical rule involves beginning the search for correct code assignment to the alpha index. Okay, we know that. I’m trying to find where it says signs and symptoms.

Alicia: I think it’s down just a little bit further. The wording was almost exactly alike. There you go.

Laureen: So codes that describe symptoms and signs as opposed to diagnosis are acceptable for reporting purposes when a related definitive diagnosis has not been established or confirmed. So working diagnoses can be confirmed later on. But if it’s still a working diagnosis, it’s not confirmed yet so we don’t code it until it’s confirmed, okay? So that answers that one. Okay.

Alicia: I always tell my students, “You don’t want to give them diabetes before they actually are diagnosed with diabetes.”

Laureen: Right, yes. And that’s a very good point. If you… I used to or I still do but when I first had migraines, they thought it was MS. And so all of my forms are r/o MS, rule out MS. Well, along the way, they actually put in my chart like I had it which I didn’t. I come to find out it was a complicated migraine. So when I went to go get… I don’t know, insurance, life insurance, disability insurance, something like that… they were like denying me. I’m like… and this was when I was a lot younger than I was and come to find out that was why. And it took a lot of work to get that off and then to realize, no that was a working diagnosis. It was a rule out diagnosis.

So… a working and rule out, they’re similar but it’s kind of like the opposite. The doctor, when they say rule out, it’s this thing that could be but probably not. They just want to rule it out and get it off the table. Where working ICD diagnosis is basically the physician knows what it is and is just trying to get confirmation.