Q:  [Integumentary System Medical Coding] Can you please discuss ICD-9 coding for skin wounds, ulcer, abscesses, infections, and cellulitis? I am looking to clarify the difference between wound and other types of skin issues previously listed.”

Well, I am going to give you a little heads-up, guys, you know I kind of like pictures, so I did go pull some pictures.

Alicia:  I am just telling you now nothing too bad. My children came in throughout the day and said,

“What are you looking at?” but they are so used to me looking at these stuff.

Alicia:  Yeah! I do not think, yeah. One of my favorite educational doctors on YouTube got, someone turned in or whatever they do to him because he said this stuff was too gross to see.

Again, they wanted some clarifications and it is very confusing. Some of these terms they kind of play into each other but you want to make sure that you understand the differences and I give a little example of some ICD-9 coding that would be involved in that.

A:  Wounds – First off, you need to know whenever you are doing wounds, the primary thing you are going to think about the location. Where is the wound at? What is the dictionary definition of a wound, it would be, “an injury to living tissue caused by a cut, blow, or other impact typically one in which the skin is cut or broken.” They’ve got “cut, gash, laceration, tear, slash.”

This is incised, a cut to the palm of the hand. This is a no-jagged edges, it’s straight, this would be considered a laceration, and he is probably going to get some stitches in there and antibiotic. 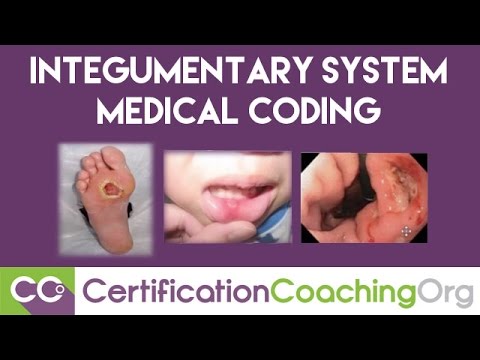 To go look at those codes, and I didn’t do them on ICD-10, I should have. Open wound of hand, your choices are going to be: open wound of hand, open wound hand complicated, or open wound hand with tendon involvement. There is going to be 882 and you have got (.0), (.1), or (.2). This obviously is going to be an 882.0 because there is no complication here. There are no jagged edges, you do not have to debride anything, and they are probably just going to clean it and just do a blanket stitch and stitch that thing up.

Again, complicated, the doctor will tell you it is complicated, it is more involved than just stitching up. They may have to realign the edges if it is real jagged because some of that tissue may not have good blood supply so they will cut away some of the skin and debride some stuff, then that would be complicated. Or, if it was so deep and it could be this small of a cut, but if it went in so deep like a stabbing wound, then again a tendon could be involved and then they have to go in and sew that back together. There might be surgery involved or you might not be able to ever move your thumb again. Tendon and ligaments are important to know. That will be in your documentation. You do not have to guess at this stuff.

Ulcers – Again, very important the location and often the stage but there are so many kinds of ulcers, and so I took the three different ones here. It is “an open sore on an external or internal surface of the body caused by a break in the skin or mucous membrane that fails to heal.” This is actually the stomach or the esophagus and I do not know if you can see that. There is the ulcer, you can even see it was bleeding a little bit. This would be, I just decided it was an esophageal ulcer but your esophagus really does not look quite like that. That is more into getting into the stomach.

That would be 530.21 – ulcer of the esophagus with bleeding. And they want to know is it bleeding or not bleeding, especially internally, and the way they know that is either they have, they call it coffee ground emesis. It looks like you are throwing up coffee grounds and that is blood, or it passes in your stool, it’s very, very dark. They will ask about that.

This is actually an ulcer. When I had braces and I got hit in the mouth, you get these little ulcers and stuff or little cold sore-type ulcers, and some people just have enough of these herpes complex thing that is not the bad herpes that you think of, but they are just in your system and some people are predestined to get these more often than others. Again, you get any type of a little cut or nick inside there and it will ulcerate before it heals; but the inside of your mouth heals very, very quickly.

The next one would be like a pressure ulcer, and these are the ones where location as well as stage is very, very important. An example of those would be ulcer of other part of the foot that is what this would be, 707.15 for this ulcer. Or you could have one of the back which I did not get a picture of the ones for the back because those are pretty gross, but that would be 707.03 pressure ulcer of lower back. But note that when you have an ulcer of the foot or the back, these pressure ulcers or decubitus ulcers they are going to want to know the stage, and you will always see this indication: “Use additional code to identify pressure ulcer stage (707.20 – 707.25).” So it is very important with this type of an ulcer that the stage is in there and the physician will put the stage. They are trained to do that. That information will be included.

Abscesses – Is classified as “a swollen area within body tissue containing an accumulation of pus.” That is really all it is. It is an accumulation of white blood cells. You have got a little problem, let’s say he’s got a little problem here on his jaw and it could have started out like an ingrown hair. It could be anything, and it got a little infection in there, kind of closed over but the white blood cells started accumulating just trying to kill this infection, so it swells up under the skin and gets very, very painful.This would be a 682.0 – other cellulitis and abscess to the face. Then it says: cheek external or chin. This is the code that I would have used for that.  Then it tells you to: “Use an additional code to identify the organism.” Let’s say that they drain this. They’ll go and they will drain it, they will irrigate it real good and try to get the infection out, and then they will swab it and send the culture off, and they want to know what is it? If it’s a staph infection, the staphylococcus it would be 041.1.

When you do these, sometimes you won’t know what the organism is right away because they had to go do a culture. Again, this would be one from the hand. It could have been a bug bite. It could have been a little nick or something but you get some staph in there or some other type of infection, like, MRSA or something; then that is, the white blood cells are going to congregate and go to attack that and it is going to be under the skin again. It is very, very painful, and you do have to have an antibiotic. It is really, really bad. They will put you on IV antibiotic, because this type of stuff can go septic if it is not taken care of. This redness, they do not want that redness to start travelling up your arm.

The 682 that is going to be abscesses that are acute. Again, you are going to have to know another digit here, lymphangitis, except for finger or toes, cellulitis and stuff. Cellulitis was one of the terms that were asked about… infection is next.

MRSA is just out there. It is everywhere but most of us have enough antibiotics. We do not really get, not everybody gets MRSA. However, if they just cannot get it to heal, say you had this hand condition up here and it was healing, it was looking pretty good and then it gets really bad again and they go in and they swab it and now they say, “Oh that is MRSA. That is why it is not getting better.” There are treatments for that but it is a big bad thing. Can you recover? Yeah, but that is when you start going to wound care clinics and stuff like that, they want to stay on top of it.

They mentioned cellulitis and a lot of people get cellulitis confused. Cellulitis is actually a bacterial skin infection, so it is on the skin. That is how you know it is different. You will see it. It will be red, swollen, it will be painful, and when you touch it, it’s hot to the skin and real tender.

This is a child that has cellulitis. A hand, you can see they often draw a line because it is very important they want to know if it is spreading. That means it is getting worse, versus they want to see that pink going away 24 hours later after you’ve been on antibiotics. Here is one on the inside of the leg and see they were really paying attention to where that was at, for it to spread.

One of my children, he had banged the back of his heel, you know how you get caught in the door and it just really scuffed the back of his foot up. He did not think anything of it, he ran around barefoot. And my mother-in-law had noticed, a few days later she said, “Man, that is really red and swollen,” and I kept thinking, “No, I think it is okay.” Then, the next day she said, “No, you better take him in.” The red was going up the back of his leg and that is where you could have blood poisoning, and sure enough, we got into the doctor and he said, “Yeah, this was starting to look bad.”

There was no pus involved or anything. It didn’t really look like it was infected, but it was cellulitis and you do not want those lines. The old (inaudible) , you don’t want it going towards your heart. The limbs will come in and up the legs.

Those for cellulitis would be 682, and notice that’s same as the abscess. “Other cellulitis and abscess,” so that is included, “leg except foot,” so that’s what we would classify this picture. The next one, “other cellulitis and abscess, hand, except fingers and thumb,” and that is what you got there. They want you to identify if there is an organism and they give you a suggestion of 041.1, staphylococcus, but it could be MRSA; so often you are going to have two codes and you may not know what that is, yet.

That is the difference between cellulitis infection that causes these type of things. An abscess is an infection that is under the skin and growing, ulcers, that type of wound, or another type of wound, which is just breaking, a lesion or cutting of the skin. Wound can be several types of injuries but the skin is broken. Think of it that way.

That was a fun one. I got to give you pictures.

Skin Grafts Medical Coding – When to Use One or Two Codes? 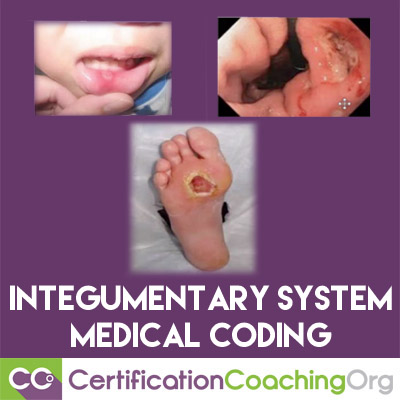