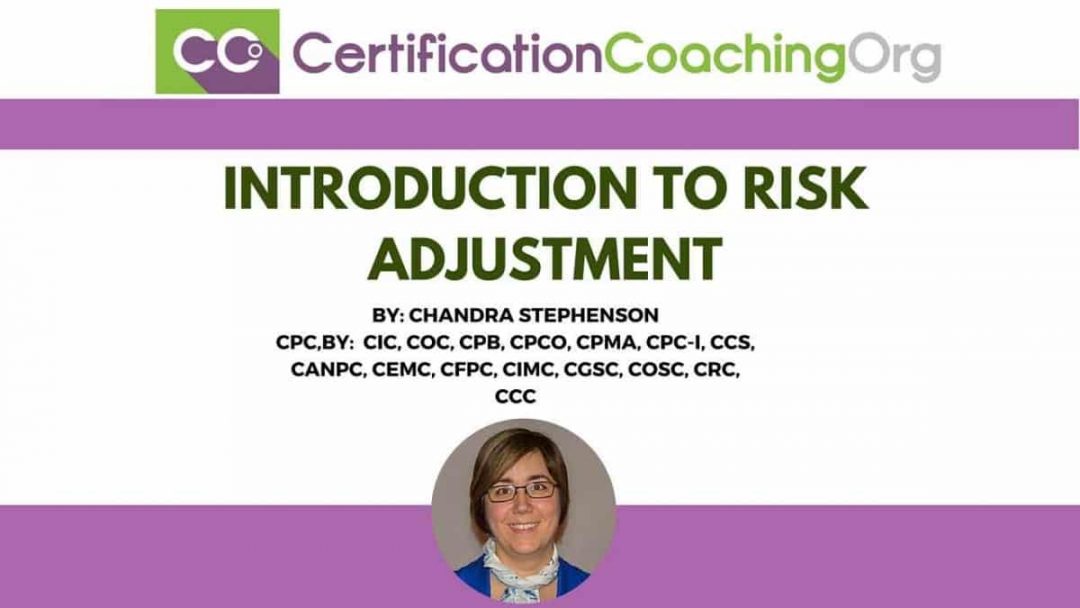 What Is Risk Adjustment?

Well, let’s break the term down. In this case, I went out and I looked for definitions of those two terms, and yeah, they’re kind of dry, they’re kind of boring definitions but let’s actually apply them to the world of insurance billing and reporting for medical services.

A risk is a situation where the probability of a variable (such as burning down of a building) is known but when a mode of occurrence or the actual value of the occurrence (whether the fire will occur at a particular property) is not known.

For example, the probability of a variable, they give us the example of burning down of a building. Well, in our world it could be a patient who has diabetes, and the variable is not knowing whether or not they’re going to require services or what services they’re going to need over the case of a year, that’s a risk.

The adjustment piece is where we’re taking fiscal and monetary policies and we’re adjusting them to balance out that payment allotment and get rid of the unknowns and try to level the playing field.

When we talk about leveling payment, that’s the whole purpose behind Risk Adjustment. 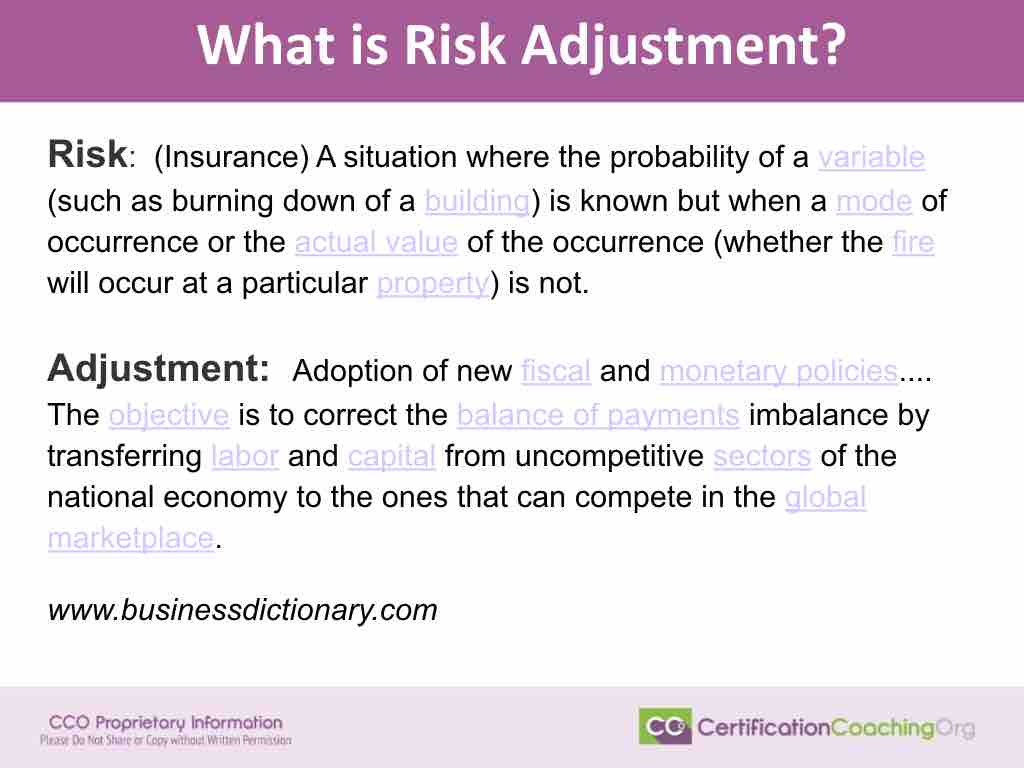 For traditional Fee-for-Service Plans, I’m not talking about Risk Adjustment, but traditional insurance payment that we’ve seen for years, the way that insurance carriers are compensated for their services it’s the same way that the physician is compensated for the services rendered. They’re both paid for services, services provided to the patient, and those services are paid typically either on a fee schedule.

Why Do I Need To Understand Risk Adjustment?

The slide above gives you a great indication as to why you may need to understand Risk Adjustment. The slide is a picture of the United States showing the number of Medicare Advantage Plan patients or beneficiaries by state. This is actually something that we pulled from the Kaiser Family Foundation; Kaiser Permanente being one of the largest Risk Adjustment insurance plans across the entire country. They provide services in a variety of different states. But they published this information annually on their website and show how much has changed and how many are in each state.

The vast majority of states, every state with I think the exception of Alaska, has some number of beneficiaries enrolled in a Medicare Advantage Plan and several states have well above 15, 20, 25% of their Medicare population. Now, some of you are going “25% is nothing.” That’s a quarter of your Medicare population, and especially if you’re working in a practice that is predominantly elderly patients, aged, disabled, those over 65, those who are eligible for Medicare, this could potentially be a very large subset of your practice population. So, this could make a huge difference when we start looking at this. 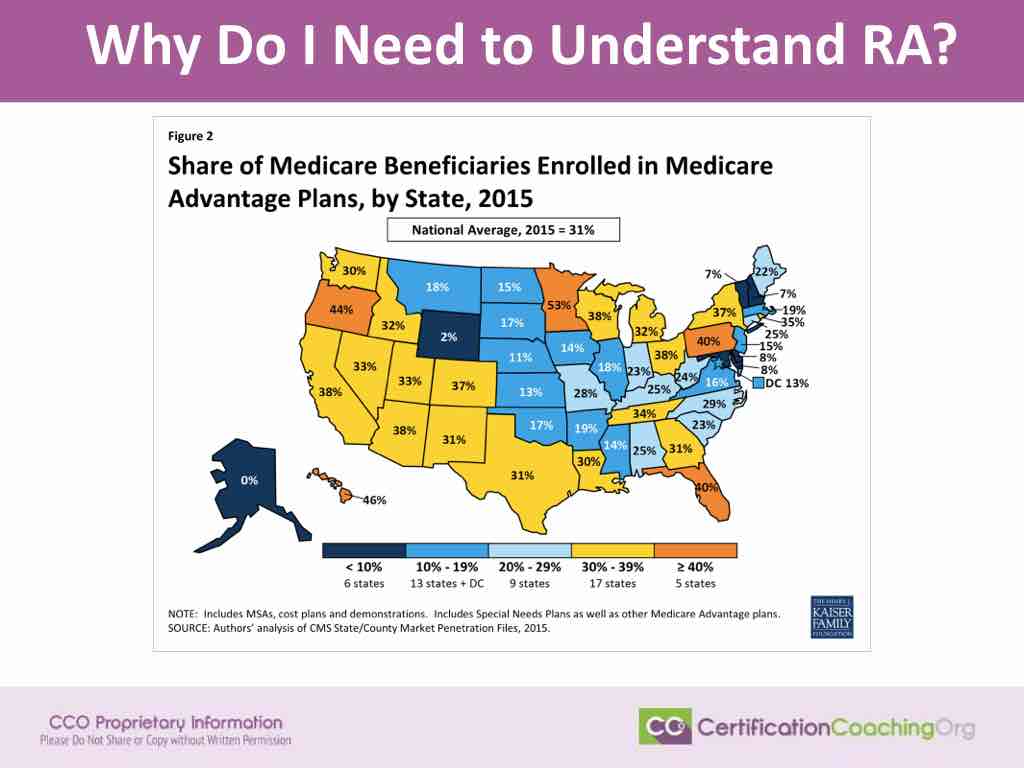 So, this is just the Medicare Advantage Plans. We don’t have data yet on how many patients are enrolled on those ACA Marketplace Plans that risk adjust. We also don’t have a very good way of tracking how many patients are enrolled in Medicaid Risk Adjustment Plans, but if they are anywhere like these numbers, think about that, your total population depending on your state. It could be a quarter of your patient population, it could be 50% of your patient population, and it could be even more than that. Not just based on state, it’s based on specialty, based on the name, type of insurance plans that you accept; all of that sort of thing.

We take this and we start thinking about how they apply this in a real day-to-day world. Think we have four patients. I got them on the screen. I labeled them patients A through D. Patient A is our normal healthy patient. Normal healthy patient may or may not receive services throughout the course of the year. We certainly hope that they’re going to come in for services particularly their annual wellness visit or annual preventive exam, their immunizations, any mammogram or colonoscopy or whatever those screening services are that are age appropriate, gender appropriate that they should be coming in for. But overall, we don’t anticipate requiring a vast number of services for that patient because they’re healthy. They don’t have any long term chronic comorbidities, anything like that we need to worry about.

Patient B on the other hand, let’s say this is a patient who’s pretty much healthy, but the patient is a diabetic. Well, just to compare to patient A, we know that patient B is likely to receive more services throughout the course of a year than patient A, simply because patient B is a diabetic. They’re more prone to complications. It’s going to take them longer to heal after illnesses or injuries. They may require medications to control their diabetes depending on the type of diabetes that they have, their activity level, their age, a number of factors; but it’s likely that they’re going to come in more frequently on a more routine basis for services than patient A is.

So, in the world of Risk Adjustment, the insurance plans would get paid a little bit more for patient B than they would for patient A. 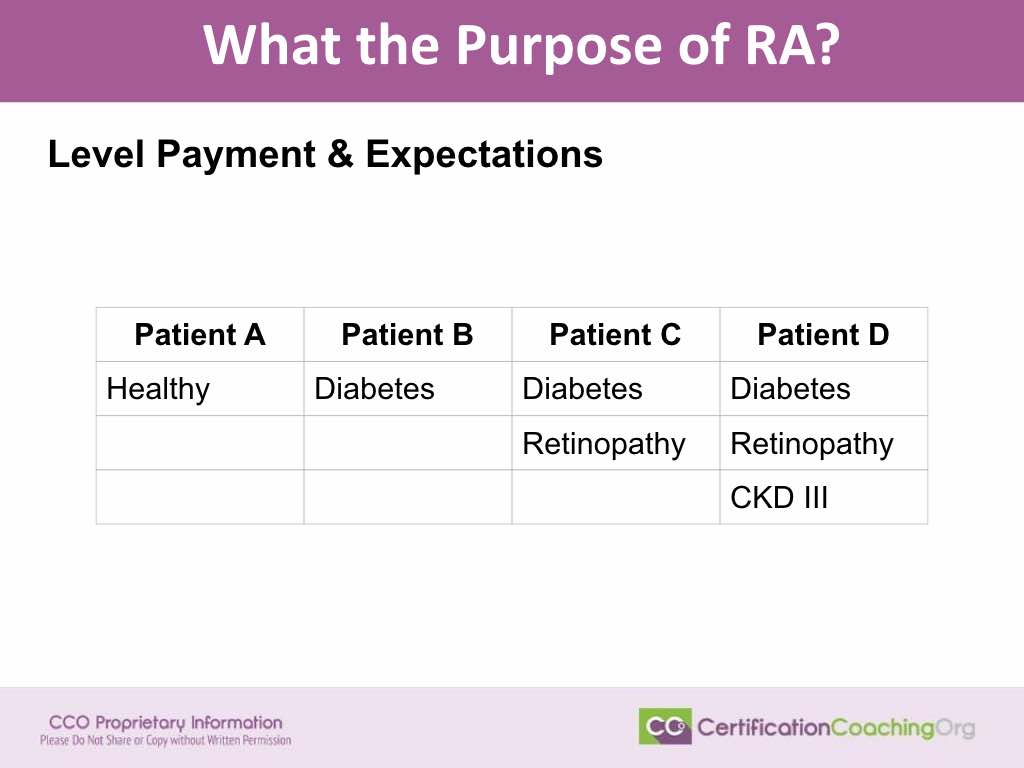 Then, we look at Patient C, and we say, “OK.  Well, the difference between patients B and C, we’re already getting paid a little bit more for this patient because they’re a diabetic.” But this diabetic has developed a complication or a related illness; in this case, they’ve got retinopathy. Retinopathy ups the level of service that the provider is going to need to provide; patients are going to require seeing additional physicians, right? Maybe they were seeing either their endocrinologist, or their primary care doctor for their diabetes. They developed this retinopathy, now we have an ophthalmologist involved in the services provided. And the ophthalmologist and the primary care doctor have to coordinate services and that patient is going to require more diagnostic testing, perhaps more therapeutic treatment. They’re going to require an additional level of services over and above Patient B who is simply a diabetic.

Then we look at Patient D. Well, we’re already paying a little bit more because that patient is a diabetic, we’re paying a little bit more because that patient’s got retinopathy, and now they’ve got an ophthalmologist involved and they require additional services. But then we say, “Uh-oh! This patient has developed even more illnesses that are going to affect their long-term care,” and in this case the patient’s got chronic kidney disease stage III. Well, now we’re going to have to have some additional care involved, right? Chances are they’re seeing a nephrologist. They’re requiring some additional services to make sure that we keep that CKD under control; that it doesn’t exacerbate or worsen. Checking their kidney functions on a regular basis, there’s additional lab test that they’re going to need, potentially additional diagnostic test whether it’s an ultrasound, whether it’s an MRI. Things like that, that may be required over the course of the year, so we pay more for patient D.

If you compare the amount that they would receive for patient D, to the amount that they would receive for patient A, you’re going to see it’s going to be a pretty drastic difference in how much money that insurance plan is going to get. Justifiably so, it’s just going to cost them more to cover patient D than it is to cover patient A. Risk Adjustment isn’t anything new. When we start talking about this, you’re going to find that Risk Adjustment has been around for years, and the easiest thing to compare it to, think about your car insurance, we all know that car insurance, not everybody pays the same amount to the insurance carrier for their car insurance, right? It’s going to cost more to insure a 16-year-old boy in a sports car than it is to insure a 40-year-old female in that same sports car, and the color of the car is going to make a difference, and all of those different factors factor in. So, Risk Adjustment applies in lots of different arenas, we’re just seeing it become more prevalent in how we report insurance services from medical services nowadays.

Are we really seeing the number increase for this Risk Adjustment plans? Well, this is another slide from the Kaiser Family Foundation. This is when where if you ask me that question, I’m going to say, “You tell me. You look at this slide and tell me.” In ten years since 2005, the number of Medicare managed care, health plan patients has more than tripled. 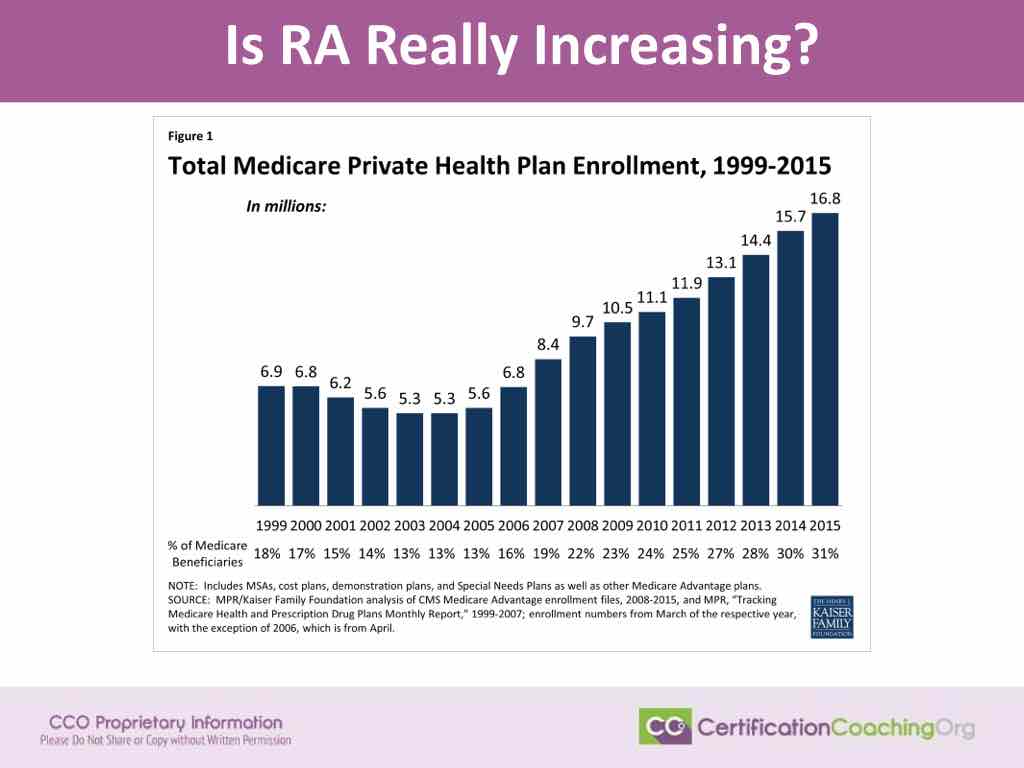 So, yes, we are seeing a huge increase in the number of Risk Adjustment plans. It’s tripled in the last ten years and this only takes into account Medicare Advantage Plans, their Special Needs Plans, all those different things that factor under Medicare Advantage Plans. We haven’t even addressed how many patients do we have on Medicaid Managed Care Plans, how many patients do we have on those ACA Marketplace Managed Care Plans.