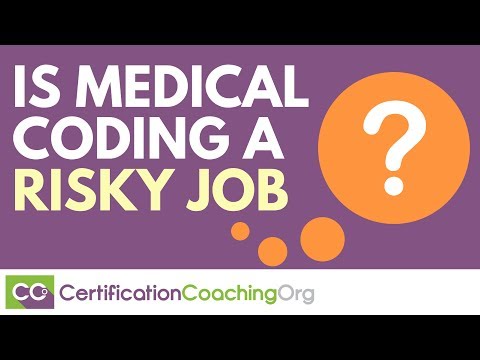 Laureen: At any rate, let’s start with the first question. Is medical coding a risky job? What do you think, Alicia? Is it risky?

Alicia: Well, you can look at it in several different ways. When I think of risky, the first thing that came to mind was you’re responsible for a lot of important documentation. There’s a lot of money involved in the long run. You hear about fraud and abuse all the time. As far as risky and the avenue that it would be something that if I made a mistake, am I going to go to jail? I don’t know I would be as nervous as some people might if they aren’t familiar with getting into coding. But there are things that can be done inappropriately not necessarily in the coding. Maybe more so in the billing. Again, sometimes if you’re in a small office, you’re doing both. In that aspect, yeah, if you make a mistake, it’s not that heads aren’t going to roll if you make a mistake. If you make a mistake repeatedly and it’s repetitious and you’re called out on it and you don’t make…

Laureen: Attempts to fix it.

Alicia: Uh-hmm. Get your compliance book out. Have a meeting. Have everybody sign it. This was an error we all acknowledge. What do we need to do? This is our plan going forward. And then you’re protected. Because that’s what they’re looking for.

Laureen: Errors and omissions. I started to look that up because when I was first coding, I was doing consulting. I would do audits sometimes for physicians or actually do heads-down coding as a contract coder. If you make a mistake, the employer normally has E&O insurance that protects the company. But they could technically sue or go after the contractor, the sub-contractor. It’s always good if you’re going to be a consultant, not an employee, but you should carry your own errors and omissions insurance.

Some people that are even employees will get coverage. That’s an individual decision. But if you do a Google search, it’s called errors and omissions. If you remember that trick I shared before, if you do site:, and in this case I was searching the AAPC site because I know that they’ve had conversations about it and I know years and years ago they used to actually have insurance that because of our association and our membership with the AAPC that we got a good rate. Here is a thread from May 2015 where someone was asking about “Can anyone recommend an insurance company that sells it?” Check that out. Protecting my certification. Let’s see. This is from a couple of years ago.

Alicia: While she’s looking at that, I had looked at it I think when we had talked about it a year or so ago. As far as being available, I had not even realized it was available. But it’s not that expensive. It was really a very reasonable amount for a year. You might consider doing that one if you start out if you want to.

Laureen: Yeah. I’m trying to think of the name when I was doing the coding, what it was called. It was a very common company. Actually, when I was an occupational therapist, it was the same company that we had E&O as an occupational therapist because you could injure a patient. But anyway, check that out. That’s really good if you are self-employed if you are working as a contractor and you are making decisions about the codes. If you are an employee, normally you’re covered under your employer’s insurance.

So that’s the risk. You could make a coding error that could result in a million-dollar mistake. If it’s an inpatient hospital case and it’s for someone who’s been in the hospital for months and months and you used the wrong principal diagnosis, it could.

Alicia: Know that you’re never just thrown out there with no support. That’s one of the reasons coders are audited often and you should relish being audited because they find the mistakes for you before it becomes a problem. Send your auditors some chocolates or something. You can’t do that with external. Oh they can’t hear you. Boyd, you’re talking in our ear. I feel like one of those famous anchor people and they go “Just coming in…”

Boyd: Okay fine. I will turn my mic on so everybody can hear me. Hello, everybody.

Boyd: Hopefully you can hear me. Like us and share this and use your emojis if you like this because I now have the status to see and respond to you guys. I’d love to see that.

Laureen: Yeah, give us a heart. Very good.

Alicia: Another thing to think about as far as is it a risky job—Laureen and I were talking about this before we got started—that a lot of people transcription was a big deal 10, 20 years ago but it’s not so much now.

Laureen: It’s a risk in that it could end.

Alicia: Right. I do think that the role of a coder is changing a little bit. However, it’s very new for providers to be doing the codes for themselves. We have the law that went in that now they’re required to use EMRs, EHRs. The next step is let the doctors do the coding. They are the ones making the diagnosis. The problem is they weren’t trained to do the coding and they don’t know the guidelines. They just know that if a person has a myocardial infarction, I type in myocardial infarction and there’s a code. But they don’t realize there’s six or seven codes for the different types.

Laureen: It’s like you had to do basic balancing of a checkbook but they want to do their own accounting.

Laureen: You really want to have a professional doing it.

Alicia: I think the role may eventually become more of an auditor, also software support, going in and looking at the EMR as a coder and making sure that all of the drop downs and everything are included. That could be a role. But coders aren’t going anywhere.

Alicia: Believe you me, there is plenty of jobs going around because they’re hiring lots of them overseas. Coding is a job that’s going to be around. Maybe it will shift our role a little bit.

Laureen: Yeah. It’s definitely shifting. When I worked for CodeRyte—that’s a company that was bought by 3M—they’re a computer-assisted coding company, CACC. That was the big concern. They would go in. They’d get a contract with a new group. Maybe that company had 20, 30 coders and they’re like “Oh, we’re going to lose our jobs to the computer.” No. Maybe the 30 full-time equivalents did get reduced to 25. The rest kind of got elevated. What they were doing is they were using the computer-assisted computer program to suggest codes, but the human coders would still say, “Yep, you got it right, computer. No you got it wrong.” It would learn. The easy cases would get coded by the computer, but the harder ones would get coded by the human coder. It elevated them to be, like Alicia said, more of an auditor.

The bottom line is—I’m a big believer—we are in a global world economy. You can get upset about jobs going overseas and different things, but it’s the way it’s heading. You can be angry and upset and fight it or you can embrace it and position yourself to be in management to be more of an auditor and that sort of thing.

Alicia: And specialist in the field.

Laureen: Yeah. It’s not that risky. It’s not risky of you investing the time to learn it and the career is going to die. I’ve been doing this since 1999, and back then we were talking about transcription dying and it’s still around. It’s morphing into these new things like these scribes where the coders are shadowing physicians. It’s like a one-to-one relationship and they’re actually coding for the doctor, actually doing the EMR for the doctor. The doctor is just free to deal with the patient. There’s all these different technologies that are coming out. They’re not going to go away but it might change.

Alicia: There will be more specialties coming out too, don’t you think? People will specialize in cardiology, specialize in oncology. That’s one of the perks AAPC has all these wonderful specialty credentials.

Laureen: Yep. Alright. I think we thoroughly answered that question. Let’s see. Is there anything in Facebook?

“Will manual coding be completely replaced by computerized coding systems eventually or be outsourced to countries with lower wages?” That’s funny. We actually just answered that without reading that question. But no, it will never be completely. Just like when encoders came on the market— and I’m really going to date myself—you had the paper manuals and then these electronic manuals came out. It was like “Oh, there goes our jobs.” It’s just a tool. It did make the human coders more efficient. Maybe it made the productivity expectations go up, but it didn’t get rid of tons of jobs. It just kinked them a little bit.

Alicia: I have to tell you that before you had your coding manuals—this is before my time and probably before Laureen’s—remember the old computer printouts with the tabs? They were really big sheets. That’s what the codes were on and they used to have to flip through all of that data.

Laureen: That was on my time.

Alicia: Yeah. I was talking to someone about a year ago in one of the conferences and she said, “Do you remember?” I said, “No, I don’t remember.” But she said, “That’s the way we used to have to look up codes.” And then it got to me. Again, things change and now we have online coding manuals.

Laureen: Chandra, who has been under the weather, is listening in and she said this is the company she uses for her E&O insurance.

Alicia: Very good. Take a minute to write that down if you’re interested.

Laureen: She put it in the Facebook chat, so thanks, Chandra.

Alicia: Yeah, that’s a good one.

This segment “Is Medical Coding a Risky Job?” originally aired on Live with Laureen #014 on January 12th, 2017.