Alicia: Q: Could you please explain how to read the Neoplasm Table?

A: This is so much fun. You are going to enjoy it. Now, I think Laureen was going to give me control here. I have actually a screen of the Neoplasm Table but first before I show you that I wanted to say that the Neoplasm Table is found in your ICD manual in the index. Some of them will have it located in the “N” section.

The thing that you want to know is that the Neoplasm Table is often in the index under “N.” It’s in the alphabetic index and then you have the tabular. Note that when you look up a code in the Neoplasm Table, you still need to go look it up in the tabular. Don’t be a lazy coder and just say, “Oh, there’s my code. See 18.3,” and mind you these are ICD-10 codes that I’ve got up on the screen. The other thing is that I know my ICD-10 Elsevier Manual; they took the Neoplasm Table and the Table of Drugs and Chemicals and gave them their own spot after the index before the tabular. Again, there’s no copyright on the ICD-10, depending on whose manual you use, which publisher, but it’s going to be somewhere close to the index

How to Read the Neoplasm Table for Medical Coding – Video 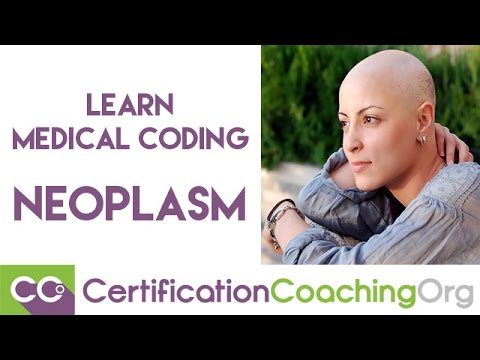 Let’s talk about, real quick, what we need to know when we’re looking at the Neoplasm Table. When we go to find a code in the Neoplasm Table, the first thing you need to know is the body part that you’re dealing with. I went ahead and made a little note here. If we look up the intestine and we have, let’s say, the location is the intestine into the small intestine. You notice here it tells you this is under intestine. This is small intestine, but look, we have an indent. There’s more than one part of the small intestine. We have the ileum and we have the jejunum, and then there’s actually a code for overlapping lesions where it’s involved in more than one area.

Let’s say we’ve got it in the duodenum which I said that wrong earlier. I like saying duodenum. Now, we know that we have tumor in the intestine, the small intestine in the duodenum. Next, what we need to identify is what type of tumor is it. Is it a malignant tumor? Is it a primary malignant tumor? Is it a malignant tumor and a secondary tumor? Primary means they don’t have cancer anywhere else – this is the first time they had cancer and this is just a rough commentary on deciding. There’re guidelines that are involved. Secondary malignancy would be that – let’s say that they had lung cancer and now they have a tumor that’s located in the duodenum and so it’s a secondary cancer.

Your other options are cancer in situ which means it’s encapsulated, but keep in mind that if it is a cancer in situ it will state it is a cancer of the duodenum. It will either say CIS or cancer in situ. It’s a specific type of cancer. Then, we have benign as an option. We have malignant here – these three are malignant – and then this is benign, meaning that it’s not spreading. It’s not that invasive cancer. It’s something very different than malignant.

Next, we have Uncertain Behavior and Unspecified Behavior – when you talk about uncertain behavior and unspecified behavior that is something that so many new coders, even if you’re not new that you get a little confused with. Uncertain behavior has to be designated by the physician in what he is saying is, “We have seen this before but we’re not sure what type of… The cell structures, what’s going on? We’re uncertain at this point.” You might get a pathology report. It’s really what you’re going to see that in. We’re uncertain of the behavior of the cells. Unspecified behavior is stating, “We don’t know yet. We don’t have enough information to tell you if it’s malignant or benign, but we’ll get there.” You don’t see these two columns used as much, still used, but you need to only use them if that’s documented. You’re often going to see that with the pathology report. The ones that are the most common that you’re going to use is the malignant primary, malignant secondary, and the benign.

If we have a benign tumor of the duodenum which is located in the small intestine, now that we know where all the information is in the table, we are just going to scroll over here, put your finger on the duodenum and you’re going to scroll over. For ICD-10 that code would be D13.2. You don’t stop there. You now go to your tabular and look up D13.2 and make sure that the information is correct and meets your diagnosis.

Again, if it’s a primary malignancy of the duodenum it’s C17.0, or secondary C78.4. That’s how you use the Neoplasm Table. You’re going to first find the location – the body part that’s affected. Once you find the body part, make sure you’re at the highest specificity, so we have intestine, but we got lots of intestines and we’ve got small, large, so on and so forth. So, we have small intestine, then we break it down. What part of the small intestine? Duodenum and we have a primary malignancy C17.0. Go double check it in your tabular and that’s your code. That’s it guys. It’s not hard once you get the feel for it. I would say if you’re not familiar with the Neoplasm Table it’s not…well, it is big. I wouldn’t say it’s not that big, but it is. Just scroll down this area right here some afternoon and just look at all of the body parts and how it’s divided up in the indents.One thing that could mess you up is that you don’t pay attention to the indents. That’s it. You’re good to go with the Neoplasm Table.