One of our students have asked to review neoplasm coding from the ICD 9 manual.

If you have your ICD 9 book handy, this is in the index if you go to the Ns for Neoplasm. The first thing you want to remember about cancer coding or neoplasm coding is the fact that really, you should not start with the neoplasm table. And this was kind of new for me. I had actually been teaching a couple of years before I actually realized that you should look for the main term in the document that you’re coding like melanoma or whatever. You go to that first. 9 times out of 10, it will direct you to neoplasm and the table but always start with the main term that you’re trying to code and let the index direct you to the neoplasm table. 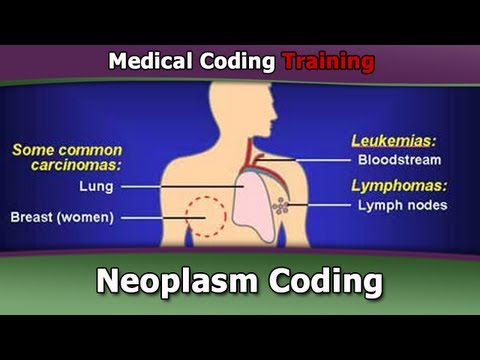 So once you come to the neoplasm table, what I want you to look at first is these columns. Okay so there’s… in neoplasm… here you go, Jane. Here’s medical terminology, right? Means new growth. It doesn’t mean cancer. It could be but it means that there’s a new growth. So we see here that there’s 3 types of malignant cancers: primary, secondary, and cancer in situ. The primary type is it’s a spreadable type of cancer. And secondary is where it spreads to so you’ll see in the documentation, phrases like ‘with mets’. So maybe they had breast cancer with mets to the liver or with mets to the lungs or something like that. So the primary cancer would be the breast and the secondary cancer would be the lungs or the liver.

Okay, cancer in situ is cancer that’s not the spreadable type. It’s kind of encapsulated. Another instructor tells her students to think of an egg, it’s like the yolk in an egg. So it’s encapsulated, it’s not going anywhere.

Then we’ve got benign neoplasms which is self-explanatory. Uncertain behavior, they’re not sure they’re watching it and then unspecified. They just know that it’s a neoplasm but they don’t know. A lot of times, coders will wait for the path report to come back to code it as primary or secondary or whatever type cancer it is. But sometimes, they don’t know. They don’t plan on documentation coming back to code from so they code it as unspecified.

So once you determine what type of cancer or neoplasm you’re dealing with, that’s the column that you’re going to use. So let me scroll down a little bit here. So let’s just take abdomen and I’m just going to use the top row for illustration purposes. So if the cancer started in the abdomen, if that was the primary location, you’re going to pull from this first column. Encode at the 195.2 because that’s the primary column.

But let’s say it spread to… I’m just trying to stay on the same page here. But if it spread, if it was a secondary cancer of the abdominal pelvic area, let’s say. You’re going to code from the second column, 198.89. And that’s how easy it is to pull from these columns. They still turn to the tabular and look at the code definition and confirm that you’ve got the right code that you’re looking for. Don’t just code from the table.

Then the next logical question is well, since it’s a secondary cancer, where did it come from? Where did it spread from? So that is going to go on the second position on the claim form, the second diagnostic slot.

If you don’t know where it metastasized from because maybe you’re coding for radiology and they don’t know. They’re just doing a brain scan or a liver scan. Then they have to use 199.1 which I have circled here. That’s the unspecified primary site. Okay so that’s how you handle the secondary cancer coding.

Now if it’s a papilloma then that’s considdred a benign neoplasm. So make sure that you have this marked up for the skin ones. Let me see if there’s any starred ones on this page. No sorry, I don’t have any examples. But it would be an asterisk and you know because sometimes, it’ll be abdominal. It’s like, “Okay, are you telling me about the skin of the abdomen or you’re talking about internal organs of the abdomen?” So that’s what the star would help you understand.

Boyd: Do you go over this at all in the Blitz course? It’s just being asked by Linda.

Laureen: That’s… I do cover that in the Blitz because I do feel that that is a question that you’ll be asked on the board exam, especially the secondary cancer coding. 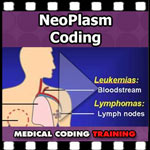