A: I don’t think so. They didn’t do an update for 2014. They’re done. They are ready to move on, although – who knows, they might try and do something because they want to make money, too. Now their sales for ICD-10 are going to be plummeting, but CPT will chug, along so will HCPCS, but ICD, I think, will be fine to use from 2013 forward. But we’ll have to wait and see if there’s announcements. That’s my current opinion.

Q #27: Do you know if there’s any support for billers like there is for coders?

A: Laureen: You mean like discussion boards and stuff like that? Yeah. Our community of billers is growing. As you can see from a lot of questions they are reimbursement entangled with coding-type questions. But if you mean like how do you do certain things on the 1500 form and stuff like that, if you start asking those questions at our discussion board I think you’re going to see that you’ll get some good answers.

Another organization that I like is AMBA (American Medical Billing Association). I’ve worked with those guys in the past. I’ve done speaking engagements with them. They seemed to be really top-notch in their community, seems to be very helpful with each other. I think a lot of them are billers that do it for themselves. They start their own business, but they have a lot of billers that worked for doctors, too; so it has grown. But when I first was introduced to them – I hate to say how long ago – it was mostly people that were starting or had their own billing business. 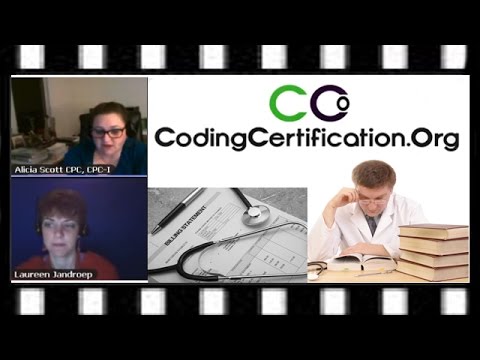 Q #28: Would you guys have a webinar on interventional radiology?

A: Laureen: I don’t know that we do a whole webinar. I could probably try and do a CEU class, but yeah, it’s very easy to get lost and confused with it.

Alicia: Like I said, it was going over my head. Now, I can tell you that when I was doing some research, because the AAPC, wherever you’re located it will list jobs when you put in your zip code, and there was a coding job that was on my list for a radiology coder at a local radiology place, imaging center, which is just around the corner, and I thought “Well, I don’t want a job, but if they would let me shadow.” So, I sent them an email and said, “I need help. I want to build up my experience on this. Can I shadow you?” They haven’t sent me a message back, but it’s because that is hard and I’m not very good at.