It is hard for me as a certified medical coder and biller, to separate the two professions when discussing medical coding guidelines. To be a good biller, you need to understand coding regulations; and to be a competent coder, you need to be aware of billing regulations by payer. So let me show you how I approach an operative note when medical billing and coding for a surgeon.

The first thing I do before coding is to look at the coverage a patient has. By right, a person’s coverage should not dictate how to code any patient encounter, but as coders we are taught most things based on CPT and in reality, there are a myriad of differences in regulations between Medicare, Medicare Advantage plans, and other payers. I will say, however, that more and more carriers are following Medicare’s rules, but it is still very important to understand the differences between Medicare and other insurers.

When it comes to CPT and Medicare, coding principles count. For example, Medicare regards post-op complications such as an infection differently from payers that follow CPT guidelines.

The difference is based on one key word: “typical”. So what is considered “typical” post-operative care between Medicare and other insurers when reviewing the post-op global surgical package?

To begin with, if a patient is treated for a complication and returns to the operating room (OR), Medicare will consider payment with the appropriate modifier such as 78 – unplanned return to the operating/procedure room by the same physician or other qualified health care professional following initial procedure for a related procedure during the post-op period. An example of an unplanned return to the OR would be uncontrolled bleeding which requires surgical intervention. Modifier 58 would also qualify as a staged or related procedure by the same physician or qualified health care provider during the post-op period. An example of a staged procedure would be reconstructive surgery after a double mastectomy during the 90 day post-op period.

Now if a patient returns to the surgeon’s office with a post-op wound infection and is treated in the office, Medicare considers this part of the global package and will not reimburse the surgeon. So remember Medicare’s golden rule on post-op billing during a global period:
NO RETURN TO THE OR = NO BILLING DURING THE POST-OP PERIOD.
In addition to this, CMS states that when a patient is readmitted to the hospital for a surgical complication during the post-op period, a surgeon cannot charge for the readmission. With this knowledge, you can understand the need to know the rules of surgical billing per payer.

I strongly suggest coders understand modifiers. Modifiers dictate reimbursements as well as the re-establishment of a surgical global period. The National Correct Coding Initiative shows you appropriate modifier use and points out bundling and unbundling rules.

Visit https://www.cms.gov/Medicare/Coding/NationalCorrectCodInitEd/index.html for more information. And don’t forget that www. offers a modifier training module with printable charts to use as a guideline as well. It is definitely worth the investment!

Next: Part 2 – Medical Billing and Coding Training – What to Look for When Coding and Auditing Surgical Procedures 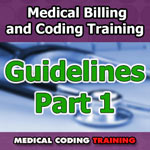