Q: This is more of a billing question. If the doctor performs at the hospital, as an outpatient procedure, a bone marrow which is code 38221, can he add an E/M code along with a modifier 25? This is a Medicare established patient. He is a hematologist/oncologist.

A: The code we are speaking about in the code descriptor is 38221 which is bone marrow; biopsy, needle or trocar. A needle is inserted through the skin and advanced until the bone is actually penetrated. Then, a small chip of bone marrow is removed for biopsy by a trocar needle.

This code can be used only once a day. There are a few times when you would need to do it more than once a day, but it is a once a day code.

I want to talk about modifier 25 a bit and I’ve learned so much about modifier 25 through the Blitz videos with Laureen, but it is a global package modifier. It’s used if there is an E/M on the same day as the procedure and that E/M is for a significant, separate service. You can’t use it as a modifier for an E/M for a decision to perform surgery.

This is not happening here for a scenario where the patient is coming into the hospital to have anoutpatient procedure done. When a patient does go into the hospital for that, usually an E/M is not performed. You don’t usually put an E/M on an outpatient procedure. It’s just not usually done, because if the doctor comes in and sees you before the procedure usually he is justlooking, “OK, everything is cool.” It doesn’t constitute an E/M.

Medical Billing Bone Marrow – What code to use? – Video 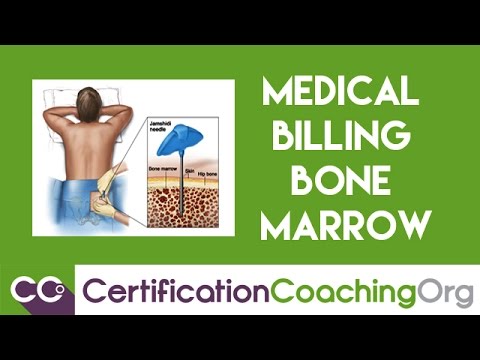 If the doctor came in and he looked at you and you were having some kind of reaction that didn’tseem normal or you were sick or your temperature was 105, he may need, at that point, toevaluate you. If he does, then of course he can be paid for that, because it’s a separate thing.He’s looking at, “What’s going on right now and maybe we shouldn’t be doing this proceduretoday.” In that case you can use that procedure.

Basically, procedures do have built into them a quick overview of the day of the procedure, but like I said if there’s a huge worsening of symptoms or they’re having new symptoms then that is another issue when we could use it.

If the person, the day of the surgery, had a situation going on like we said a big exacerbation of symptoms or a problem that may interfere with the procedure, then an E/M would be warranted, you would use your modifier 25. You have to be careful about billing too many E/M in a day. Also, this procedure code can only be reported once a day.

Laureen: You did it. Awesome! Seems like modifier -25 is coming up a lot tonight.

Laureen: Thank you, Dawn. Another little thing that I share with my students for modifier 25 and E/M to really visualize having a procedure note and then a separate, significant E/M note. That’s what 25 is saying, so I’ll say “You can’t bill an E/M unless you have a HEM,” meaning that you can clearly see a history, exam, and medical decision making, then, you can feel comfortable reporting it and not getting in trouble.

Alicia: Dawn is the instructor and coach for our billing course, and she is real savvy with billing, so I’ve asked her several questions with billing. Thanks, Dawn.