A: Well, if I can answer that question. Let’s see here. OK there we go. Do you like that little graphic I found of the gears of the brain? Isn’t that great?

Medical Billing is really all about reimbursement, first of all. Think of the Billing as reimbursement. It’s much more than that but when you think of billing, that’s the first thing that’s probably going to come to your mind.

It’s about obtaining the reimbursement for the work that was done to the patient by the provider and that usually is the E/M — the Evaluation and the Management of the patient. Whether they did any procedures on the patient or not, he is evaluating and he is managing the care of the patient, maybe it’s the disease process of the patient.

Now, medical coding is really just the language in which the transaction is carried out. Coding is literally a code that the actions are translated into. Let’s explain that a little bit differently. Your physician sees a patient. Let’s say our patient’s name is Judy. So, Judy comes in and the doctor does an Evaluation and Management of Judy. By what he does to her with the Evaluation and Management, CPT codes and ICD codes are assigned by the coder.

Let’s say that he did a yearly physical for her and checked her diabetes, and noticed that it appears that she has hypertension. In all that stuff that he did, every procedure that he did gets a CPT Code and the Evaluation and Management is all CPT. Then, the diagnoses that he gives her, which will say that he diagnosed her with diabetes and hypertension, those are ICD codes, diagnosis codes. 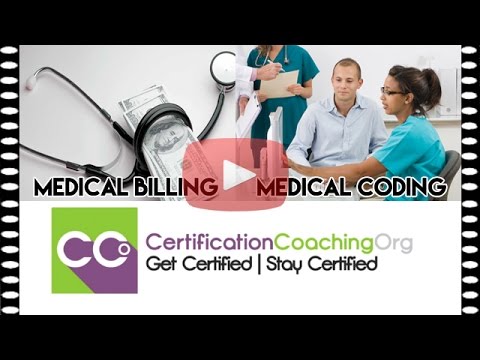 So, the coder assigns the codes to the encounter and then passes those to the biller. So, the biller then takes those codes, which would be a CPT Code for the Evaluation and Management and the two diagnoses codes which would be 250.00 and 401.9 puts those on the CMS-1500 form, and fills out all the patient’s pertinent information, the insurance’s information, and demographic information and stuff. Then, that is sent to the payer for reimbursement. So, the transaction is easier when it gets to the payer, which is the insurance company. It runs through their system and it’s either accepted or rejected.

Or, let’s say the wrong code was given, then the biller looks at it, sees what the problem is, takes it to the coder, the coder corrects it and then the biller resubmits it, and this all has to be done within a certain amount of days to be reimbursed. But that’s how a biller and a coder work together. They work as a team.

In some cases, you might have a coder and a biller be the same person. It depends what size of a facility that you’re working with, but both the medical coder and the medical biller work hand-in-hand and what they’re doing is they’re translating the information that the physician is providing for the patient into a code that the people that are going to pay or reimburse understand so that everything can be done in a timely manner and it can be done electronically, but people also forget that it’s done for statistical purposes.

So, not so much the biller but the coder was initially coding was initially done for statistical data, and so the information the coder provides is again given to the biller, the biller sends it off for reimbursement, but it’s also stored for statistical data. In that way, Health and Human Services can tell how many patients had breast cancer in Dallas, Texas in 1999 and how many of them had a mastectomy and how many of them had a lumpectomy and how many of them subsequently had cancer in the other breast within five years, things like that. That all boils down to statistics, and even what medications were given and things like that.

The biller and the coder performed two different services, their jobs overlap and you could have one person performing both jobs if it’s a small, maybe a one physician or probably not a small facility but a small practice, even maybe two doctors or maybe a specialty, maybe a podiatrist or something that is a small… maybe more than one doctor, but it’s repetitious. It’s very important, and you have to know coding with both of them, and really, you have to be aware of billing with both of them, because both cross your path.

A: This is a fantastic question because in both coding and billing world, you’re going to need to know what an ABN is. The ABN stands for Advanced Beneficiary Notice. This deals with Medicare. It’s a Medicare waiver, actually, and nobody’s going to say Advanced Beneficiary Notice, they’re just going to say ABN. The only people that have to deal with this are Medicare patients, but I got several little points here about ABN and who and why they use them.

It’s a written notice from Medicare. It’s on a government form. Everybody uses the same form. It’s called a CMS-R-131 form. Because it’s a standard form which looks the same, that if you have someone fill it out for you, once you’ve had one person fill it out for you, it’s really easy to explain.

What it tells the patient is that Medicare may deny payment for specific procedure or treatment and that you will personally be responsible for full payment if Medicare denies the payment. That’s why it’s called an Advanced Beneficiary Notice. They’re saying, “In advance, we want you to be aware that Medicare may not pay for this, and if they do not pay for it, then you will be responsible for the payment.” That allows you to decide if you want to accept or refuse the ABN.

Some people want to know: “How come I keep getting these ABNs, and I have to keep signing them?” Well, that’s because Medicare only allows certain things to be paid for certain amount of times. The way they put it here: Certain items or services that are covered by Medicare are only covered up to a certain number of times within a specified amount of times. Examples of these are “frequency limited” services include laboratory tests, some preventative screening tests, and vaccinations. If you receive an ABN that gives a frequency limit as its reason, it means that Medicare will not pay if you exceed that limit on the service.

This came up as a question that I’ve heard before: “Do ABNs mean that Medicare is reducing coverage?” It does not mean that they’re reducing their coverage. It’s only if and when Medicare does deny a claim do you become liable for paying it personally for the service or the item. If Medicare decides to pay the claim, you’ve lost nothing by signing the ABN, and that’s important to know and let your patients know.

Again, it’s just for them to know that if Medicare isn’t going to pay something, then they in fact would be the one that is responsible for paying and often they have a secondary insurance coverage that picks up the balance. But if they’re ever in question, they can go to the website www.medicare.gov and that gives a full explanation of ABN. You can go into the search site there and put in ABN, and it will give information about that. And I would encourage you to have your patients go there and look that up if they ever question what an ABN is or if you ever question what an ABN is, but you need to know what one is and in fact it’s probably going to be a test question. It would be nice that you know what that is.