Laureen: We’re going to open up the line for Joseph hopefully, we like to each webinar have a special guest and just have them kind of give us a little bit of their story.

Joseph: Glad to be part of the webinar.

Laureen: Thank you, thank you so much. Joseph, tell us a little bit about how you came to find CCO and what medical coding courses you’ve done with us.

Joseph: OK. So, I was doing a little research on trying to become a certified coder because I wanted to make a career change and wanted to really show potential employers that I have the knowledge to be a certified coder, to take on medical billing. One of my friends and acquaintances actually was aware of Laureen as a coding guru and recommended that I take a look at her products. I eventually decided to enroll in “Physician Based Medical Coding Course” which included a lot of the other products including the Blitz Videos, and I also enrolled in ICD-10-CM Mini Course.
In the past summer 2013, I basically bought the manuals, the ICD and the AAPC Physician bundle and I marked up my book exactly the way Laureen described in her lectures, exactly as it appeared with the highlighting and bubbling. And a few months later I was able to sit down for the exam and I did fairly well given my background. So, I was very pleased with the overall organized structure of Laureen’s lecture. Alicia was a phenomenal asset for any questions I’ve had. I’ve followed many of the discussion group’s discussions; I looked at a lot of the YouTube videos.

What I would say is, thank God, I recently did take a job about a month ago working for a medical billing company. What we do at the company where I work is we receive encounter forms which already were coded by clinics and physicians and our job is to submit it to the proper insurance carrier, but my coding background is definitely been an asset in that I’ve identified codes and modifiers which don’t seem to match medical charts, and a number of my co-workers are already impressed with the coding knowledge I’ve obtained relatively in a short amount of time and I’ve been highly recommending Laureen and Coding Certification as the way to learn it efficiently, quickly in a way that will be retained. So, I’m glad to have benefited, it helped me significantly move to a different career path in a fairly short amount of time.

Alicia: I have to say that Joseph again had no medical background really besides his schooling was in, and he said he wanted to do it very quickly and I have to admit that I said, “That’s great! OK. That’s what you want.” He worked really, really hard and he probably has gone through faster than any other student I’ve ever had including the ones that have medical background. Now, depending on whether you worked fulltime or not, and so on and so forth, but he was dedicated, he set a goal and he achieved it. And then he researched other avenues of things, I think you were interested in compliance and stuff. I think that is something that is very beneficial to share – that you decide what you want, you work at it. It’s not easy, but you just stay focused and stay on goal, and it can be done!

Joseph: I would say that I did not really have at all much of medical terminology or anatomy background, but just based on listening to the lectures – I was considering taking the [MTA] course, I don’t know if it’s still offered but I didn’t really feel that it was so necessary. Just by listening to the lectures itself, Laureen kind of summarized the important suffixes and prefixes that you really have to know and she pointed out correct diagrams and mark them up in your books. So, going into the exam I did fairly well on the medical terminology sections well just merely based on the lectures. So, I’m glad I found it and it really helped – the practice exams, the feedback that I’ve got and the mock exams all helped me prepare for the AAPC coding exam itself.

Alicia: Did you say, you would think it was pretty comparable then, the practice exams and everything to what the actual exam was?
Joseph: I’m not sure if this is true every year – I think I mentioned this to Laureen – I actually found that the actual CPC exam was fairly easier than the exam at CodingCertification.org, and you shouldn’t really have much of a problem on the actual CPC exam. It will more than prepare you for the exam.

Laureen: That’s great. So, Joseph I forgot about your psychology background. I wonder if you’ve been analyzing Alicia, Boyd and I [laughs].

Joseph: No. But I would say that what I’m working today is actually a billing company that specializes in providing billing services for the mental health industry so I was able to incorporate some of the knowledge I’ve had in psychology with the coding that I’ve learned from you guys and it should be done that way.

Alicia: One question, a couple of people have asked, they’re saying how are you blessed to get a job so quickly, but can you just real briefly tell them what you did to present yourself to get that first coding job, give some tips?

Joseph: Absolutely. It wasn’t so quick; I guess it relatively was quick. It was actually three months from the time that I passed the exam, and I was fulltime looking for a job. Basically, I was very persistent in networking. I contacted as many recruiters, I really insisted on meeting with people because to meet with someone is harder for them to say no to you right away. I feel very focused.

And along the way you have to keep up-to-date with the changes. Going into interviews, I was confident in my belief to discuss the changes the ICD-10 will have in coding, and when the potential employers see that you’re interested in the changing industry and that you’re up-to-date with coding regulation, the guidelines, I think that some of that worked to my benefit. I read every article I could get my hands on, you know AAPC, the newsletter, I enjoy reading The Wall Street Journal. If I had questions I would contact journalists through The Wall Street Journal and they responded to me.
So, I encourage as much as you can to familiarize yourself with the industry. If you like coding, focus on coding; if you like billing, focus on billing. You got to make as many contacts as you can, and hang in there.

Alicia: That’s excellent advice because when you walk in and you are asked a question you can speak with authority and not just have that blank stares. That’s something I think a lot of people overlook is doing what you did there.

Laureen: Great. Thank you for your time Joseph, we appreciate it.

Joseph: Goodnight everyone, I wish everyone luck. And Coding Certification, the phenomenal resource; I’m looking forward to being a part as it evolves and as it grows beyond. I see there are hundreds and hundreds of attendees on this, it’s phenomenal. 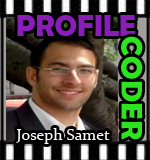