And one thing’s really great about medical coders, which if you’re a coder you already know this, but it’s a community and everybody knows that things are changing and you’re always learning so they’re very receptive to encourage and help people find things. I’ve got some people that I guess, you call them mentors or fellow coders that are one has been a coder forever and did lots of billing and another one is a compliance office; man if I have a question about something, I send them an email and they’re great to give me good advice.

OK, so do I want to hit this answers thing, and that will get up?

Alicia: OK. I think Laureen highlights them when she’s done, or what does she do, take them out? I can’t remember.

Alicia: OK. I see Ruth there, in there. 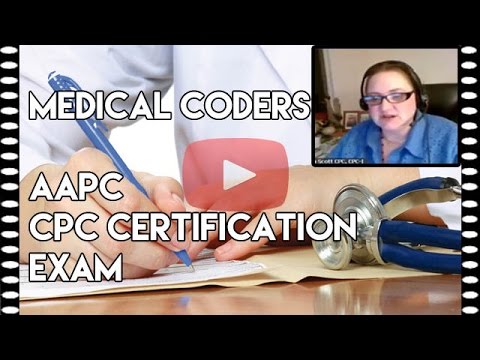 Q #1: When will the AAPC CPC certification exam be switching to ICD-10?

A: This is the way it works for the AAPC, it’s different with AHIMA. So, you need to contact AHIMA if you’re going to get a CCS. [Ed. Note/correction: But for the AAPC, on October 1, 2013, your proficiency exam in ICD-10 became available.] If you’re taking the CPC in 2014 you will not test in ICD-10, you will start testing in ICD-10 on January 1, 2015. All the new tests that are created for 2015 will be in ICD-10. 2014 all the tests are already created and there’s multiple versions like A-B-C-D-E-F – I don’t know how many letters, and they will remain in ICD-9 until the end of the year. [Ed. Note/correction: However, you have available to you as of, October 1, 2013, I think it’s 75-question proficiency exam which is not going to be difficult for you guys to take.] Don’t sweat it. You have questions about it, put questions in our forum and several people can give you some information about it. Laureen and I have already taken it and passed it and so have some other people, they offer it to instructors early.

A: OK. So, your education was only in ICD 10, you really need to know ICD-9 as well because ICD-9 isn’t going away for a while. Workman’s comp is going to stay in ICD-9 and you may be responsible for help cleaning up claims that were done in ICD-9, so knowing both code sets is going to be important. They’re not that different but they’re different enough that if you know ICD-9, it’s easier to do ICD-10. If you learn an ICD-10, it’s going to be more difficult to go back and learn an ICD 9 – I suspect. Because I didn’t have to do that, I don’t know. It just seems like. ICD-10 is easier than ICD-9, unfortunately. So, you need to start working in ICD-10. A lot of your new 2014 ICD-9 code book with AAPC has both sets in it. Like you’ll find the code for ICD-9 and then down at the little fine print it’ll give you a relating cross-over of ICD-10 that might be helpful to you.

A: They’re everywhere. Unlike the CPT manuals, which have a copyright on them, the ICD-9 does not, neither is the ICD-10. You can get, the best price for your draft is probably going to be through the AAPC because they just can get it really cheap, I guess, because of the bulk that they deal with. I think it’s like $88, maybe $89 for the draft. Elsevier has a great one, and I’m sure Optum. Ingenix is now Optum, and I think they have one. There are some other publishers out there. You can go to Amazon and start looking. Now, that the 2014 has come out, you can probably get a 2013 draft pretty inexpensive, I would think, maybe.