Alicia:     Back to Basics – This is something I’m really excited that we’re going to implement is this Back to Basics especially since we got so many new people and on credentials, they’re working on being coders or think they might be interested in coding and are coming to the webinars.

One of the questions we get a lot is:

Q: How do I know the difference between a benign and malignant lesion?

A: What is kind of interesting about this – for me is, I really like the diagnosis coding, but there’s so many fascinating things around lesions. One of the things, when you’re going to code a lesion that they want to know: is it malignant, is it benign, is it cancer in situ (which we described in previous lectures)? Now, Chapter 2 is all about neoplasms in your ICD-9 manual and here are some pictures of different types of lesions.

Alicia: I know! I could have made it a little bit bigger, but I didn’t want to… some people are super sensitive. But really, this is exactly what they do – if you have a spot and it looks like any one of these and those are numbered. Yes, you probably need to go have it checked out.

Let’s talk about what benign is: A benign neoplasm is one that is not growing excessively and it’s not really taking over the surrounding area, it’s not as destructive. But, because it’s there, it’s not normal; so, it is causing problems and they usually want to have it removed.

They say: A benign neoplasm of the breast is most often the first detected as a small lump below the surface of the skin and you’re going to want to code to, like, the fourth digit for a benign tumor of the breast regardless of the location or gender of the patient.

That’s just an example since so many are familiar with breast cancer, and often they’ll go in, they’ll feel something and get it checked or may see a spot and it could be benign. 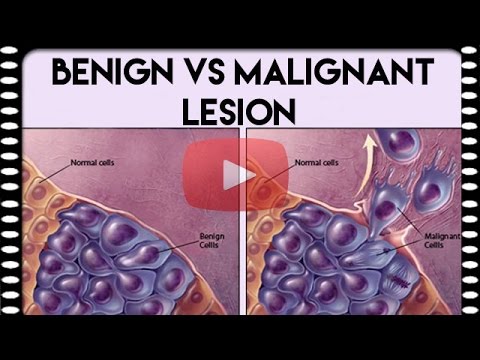 Now, let’s talk about what malignant is: Malignant is a term that is used in the medical field to describe several different things, not just cancer. But what is the heads-up about malignant is that it’s always progressive, it’s always taking over something, and it’s usually always invasive.

One of the ways they use the term malignant is about hypertension. So, tending to be severe and becoming progressively worse is a malignant hypertension – that’s another thing that you’ll hear about that. But in regard to the tumor, it’s going to be, like I said, invasive, it’s going to destroy the nearby tissues – unlike the benign – and it’s going to spread (and that term is called “metastasized”) to other parts of the body. Benign doesn’t really do that. So, that is why malignant is such a bad thing when you’re talking about spots and cancers and tumors.

Now, I thought this was interesting when I found it in the description about the Latin combination of “mal” – if you know Spanish, that’s derived from, the Latin – meaning “bad” and “nascor” meaning “to be born”; malignant literally means “born to be bad” [laughs]. OK? So, I guess you know they’ve got those songs out there “Born to Be Wild”?

Alicia: Again, when a person says, “Well, how do I know the difference?” When you’re coding, the thing of it is, you don’t really need to know the difference because the pathology report that is going to be given to you when you’re coding is going to tell you whether it’s benign or malignant. And the doctor, he will either say, “This is a benign lesion/tumor,” or “This is a benign mass or malignant mass.” But if he says he doesn’t know or he’s waiting for it to be sent off and you see the pathology report come in and it states it’s a benign mass located in the breast, then that’s what you’re going to code. That takes a little bit of the pressure off, but again, in the basics you need to know the difference between benign and malignant when it comes to lesions.