One thing when you’re a coder especially where you’re taking medical coding courses and everything, you fall in love with your medical coding books and manuals, because that’s what you’re being tested on and they become your little babies. When you get out there and you start working, most everything is done on the computer, but I can tell you every day I refer to my manuals in some way or another. A question Sandy stated: “I’m thinking about a career in medical coding, and I have heard that I will need to purchase manuals. When I looked into this it seemed there were a lot of different types. Where do I start?”

There are different types. 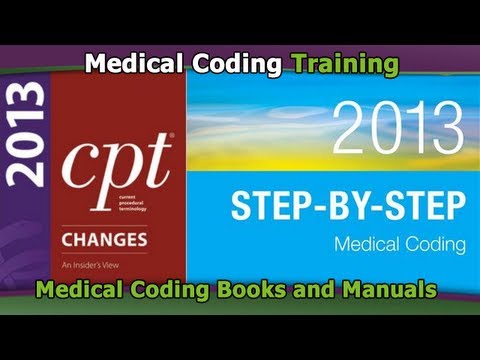 The first thing you need to know is that CPT has a copyright. Nobody else is going to make that, but CMS, but other publishers sell it, but they don’t create it so they don’t put their stamp on it. All CPT manuals are going to look the same. ICD-9, however, does not have a copyright on it, so you’ll see them from different providers. The ICD-9 is the International Classification of Disease, 9th revision, Clinical Modification. If it just says ICD-9, there is actually just an ICD-9 and it’s used for what coding was originally set out to do for statistics.

So, if you wanted to know what people died of in the United States, you would use an ICD-9 manual. Clinical Modification was done so that we could use it for other things and expand it on all of the diseases. What you’re going to find out in ICD-9 are things that are diagnoses, like, diabetes, 250.00. All ICD-9, they will all have a decimal in them. They will be three to five digits with the decimal. If you don’t see a decimal, it’s not ICD-9.

On your CPT manual, that’s all of your procedures. It’s Current Procedural Terminology, a very common one that you’ll use is a chest x-ray, single view 71010. You noticed five digits again, but there are always five digits. Unlike ICD-9 you can have three, four or five and you’ll use that decimal. CPT codes do not have a decimal and they will always have five digits. You are using them… think of it this way, ICD-9 what’s wrong with the patient. CPT – it’s the procedure. What did they do to fix the patient or fix the problem or treat the condition?

HCPCS always throws everybody. A lot of times I hear people say that “I took a medical billing and medical coding course and we didn’t even covered HCPCS. I have no idea what to do with it.”

First of all, know that there’re only five questions on the CPC exam regarding the HCPCS. That doesn’t mean it’s not important, it is commonly used with Medicare. I used to say it was a supplement, or it’s if-you-want-to-use-it type thing, which isn’t really accurate. But it’s Healthcare Common Procedure Coding System. There’re two levels: You’ve got Procedures and Services – an example of that would be you’re having a hearing aid test. That will be V5010. Now, Products and Supplies are also used. You’ve got E0240 for Bath/Shower Chair. Now, Medicare will pay for that for a patient.

There’re all kinds of rules and regulations for medical supplies and things. So, those medical suppliers that you see all over, they will use the HCPCS system to get those codes reimbursed.

Now, keep in mind here, there are more than one of ICD manual like I said. You have a Physicians or Hospital edition. If you want to know the difference, Physicians is what you use mostly with, like, your CPC. You’re going to have Volume I and Volume II used for outpatient, physician’s based coding. Volume I and II is just your index and tabular is what they’re talking about.

But the Hospital edition, they have I, II, and III and the III is procedural codes, they are used in the hospital. So, if you’re getting your CPC there will not be any procedural codes in your exam. Now, a lot of, like the book series that we used to teach out of last year, they did instruct you in Volume III procedure codes because they had an inpatient coding chapter at the end of the book. The curriculum we’re using this year through the AAPC doesn’t have that, so there’s no confusion there. All of these come in a standard or professional edition.

Again, CPT, it’s got a copyright on it so they will always look the same. They’re usually always yellow and you don’t have to worry about it being a standard or professional edition, there’s only one. Again, different companies put out or publishers put out the manuals, so if we scroll down I put some pictures on there of what some of them look like. Consistently, I have found that whatever you learn on is what you like the most. This is what the AAPC has. As you see, the CPT looks like that. It’s the same every year; they just change the year on there. The AAPC has great manuals. If you think about it, they’re the ones that are doing the test so you know they’re going to make their manuals user-friendly for testers. I went ahead and got them, I think, last year, a year before or maybe two years ago. It was the first one that I’ve seen from the AAPC and some of the students have started purchasing them because the college provided some for the students while they were in school, but they didn’t provide a set that you could mark up, bubble and highlight with the Blitz and stuff. You have to purchase your own, so that you could test with them. They’re good. They are color coded and they’re probably the best price.

In the past, Laureen had with some people on Amazon and stuff, but you can’t beat the price. And just a little tip, you want to know that if you take one of your courses, you need to purchase your manuals. That’s going to be pretty standard with most courses because we can’t get a price better than what you can purchase on your own. You’d have to raise the cost. If you buy your own, and a lot of people have their own already; so why would we want to send you manuals that you don’t need?

Now, the Elsiever, honestly Elsiever is my favorite. That’s what I had because we had… teaching at the college, I was given complementary sets. So, if you scroll down there, I would always get a free set from Elsiever. There are pages, I don’t know… I got books that the paper is good quality. I like Elsiever. I like the color coding. They color code more than the others; they have more graphics and stuff. They are more expensive, but I like the professional edition of Elsiever. You can get that on Amazon. But you will again pay more for those.

Optum which is formerly Ingenix and a lot of you may have heard Ingenix. They are good too. The school had a lot of Ingenix. One of the local hospitals here, Shannon, would donate their previous year coding books to the college so that the students would have them and they had always gotten Ingenix books and most of them were new because they all use encoder, but they were required to have them.

Ingenix is good, it’s not my favorite. I’ve heard some people say that sometimes you have problems with the pages or missing pages or something like that. I’ve never actually saw that. They do come in different sizes, I noticed. Elsiever is pretty standard. Ingenix has some little tiny ones that are real thick like a Webster’s Dictionary but small. So, it’s whatever you prefer and whatever you’re trained on, know that your ICD-9 can look different. The CPT will always look the same. HCPCS, wherever you get your ICD-9 just pick up HCPCS there. AAPC has the best prices.

You have to have all three to take the CPC exam. You’ll need all three to take CPC-H exam and you’re allowed, when you take the exam, to mark it up, make notes, write terminology that you struggle with and stuff. You’re just not allowed to put anything like a piece of paper or something that you could ultimately write down a test question on and take it out, in another words. They’re protecting the quality and the secrecy of the exam. But you can tab them; we suggest you don’t over tab them. This year, the AAPCs are not indented. They were indented last year.

Alicia: Yes, I’ve heard a lot of negative feedback about that. If you use the Bible, how you always had the old tabs and it was like that where you could find the book of the Bible that you needed. That’s very nice in that ICD-9.

Alicia: I always won in those Bible contest.

Alicia: But anyway, your manuals, you will need a good set. You need a current year, whatever you’re testing and that’s the year you need. For ICD-10, they already have drafts out so you could get one of those if you want. I know the AAPC has them and so does Elsiever. I’m sure Ingenix does too. If you think you’re going to need them, if you’re going to look in to that, you can start practicing with one of those as well.

Laureen: Yeah, we have question on the chat too. Someone had all of their notes, the technique from the Blitz videos as to bubble and highlight, they’re like “I got my 2012, can I bring my 2012 and 2013 manual?” The answer is no. You have to pick a year and bring them in. Or, let me put it this way; they will let you have one CPT, one HCPCS and one ICD. It’s up to you. They used to require and force you to do the current year, but now they put it on you. If you fail, then that’s on you; if you fail because you had an outdated manual. So, absolutely use the current year’s manual. If you have notes in an old one, transfer them. Don’t take short cuts when you’re paying $399 for this test. View it as just extra time to become one with your manual. [Laughs]

Alicia: You become real friendly with those manuals. 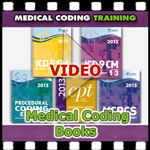