What happens is when that contracts, it pushes out the blood, so then when it opens back up, the blood pushes into that ventricle. You have a certain capacity that that ventricle, that chamber can hold; and as it contracts and pushes that blood up pass the valve into the atrium, the ejection fraction is the amount of blood that pushes that gets out of the chamber, but some of that blood is left in the ventricle. So, let’s say that you’re never going to get 100% of the blood to go up into the atrium, there will be a little bit left, so they take how much went up there, let’s say, 85%; so then that’s how they measure that. It’s not what’s left in the ventricle, it’s how much got pushed through. There are guidelines that tell you how much is normal; so it’s measured.

Since the left ventricle (LV) is the main one that is the one measured. An LV ejection fraction of 55% or higher is for the most part considered normal. That’s what you’re looking at. So, 55% of the blood goes from the ventricle and whooshes up into the atrium, goes through that valve. If you’re 50% -55%, it might be considered “borderline.” But there are some studies and different physicians consider certain things 50, 51; 50 might not be borderline for them. 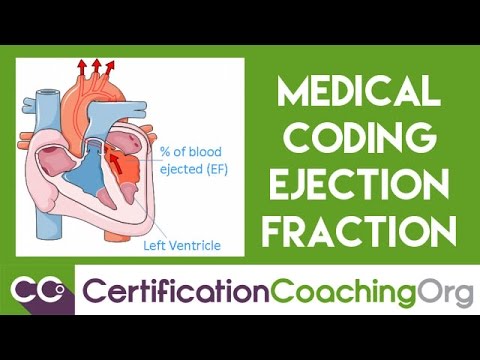 We’re going to see what are the reasons for an ejection fraction to be low, it might not be what you thought. It’s weakness of the heart so they might have dilated cardiomyopathy (again, on this term, if you don’t know what cardiomyopathy means, you need to go Google it. You need to go look it up). Maybe a former MI (meaning they’d had a heart attack).

Just a little tidbit in ICD-9, it was like six week’s out, I think, they will be considered an old MI. In ICD-10, it’s only four weeks; so there’s a big change there.

It might be a heart valve disease. As that goes through, the valve isn’t working properly, so that ejection of blood up into the atrium may not be a good amount that it should be. And they might just have uncontrolled hypertension, they may have had it for a long time. Those are all things that could give you low ejection fraction.

So, how did they figure this out? What did they do? Well, they can do several tests. They do echocardiograms, they do cardiac catheterizations, they may do an MRI, they do CT scans, and they do a nuclear medicine scan. All of those are ways that they can tell and see how much fluid and track that, that blood that’s getting up into the atrium from the left ventricle. And they can do the right ventricle too, but usually what they do is they focus on the left ventricle because that’s kind of the powerhouse of the heart.

Now, what I want to state, to answer the question that was given: occlusion has to be documented. So, occlusion isn’t necessary, if we’ve gotten zero percent ejection fraction, that doesn’t necessarily mean there’s an occlusion. I would say the answer to your question is no, it has to state that… it has to be documented for you to call it an occlusion because there are several other reasons why it could be that low.

Right there at the last, I added: Normal – 50-65%, Below Normal – 36-49%. Anything below 35% is just real bad news; so what happens? It usually means they get, like, afib; and so then, you can treat that. But if you have a low ejection fraction, they’re absolutely going to run more tests to find out what’s going on and you’ll probably, they can give you a pacemaker maybe, but you results in afib medication and stuff could be given.

Most of this information I got was from the Mayo Clinic and there’s the website: www.mayoclinic.org/ejection-fraction/expert. I love the Mayo Clinic, lots of good stuff there.