Alicia: OK. The first thing that you need to know about Botox is what is Botox? I’ve covered that in here, but the question that came with this was a little confusing to me because I really wasn’t sure what they were asking.

Q: What is the difference between Le Fort I, II, III from each procedure?

A: I’m pronouncing this as Le Fort – that is actually a person’s name. What he did was he came up with this type of maxillary or facial fractures. This Le Fort I, II, III is the type of fracture. So, here they are, this is the classification that I came up with. Here we have a Le Fort I fracture – see how that goes just over the maxillary bone there? Underneath here this lower jaw is called the mandible, but between the top row of teeth and the nasal cavity there that’s the maxillary bone.

Here, this Le Fort II fracture is actually above the nasal sinus between the orbits of the eye. Then this Le Fort II, it’s going above that nasal sinus but it’s going inside the orbit of the eye, so you can see how that is a much more severe fracture. Let me scroll down here a little bit more on this page and you can see a side view of that. Again, see how that fracture on the Le Fort I just covers the maxillary, then this arches from the sinus, doesn’t really have a lot of orbital involvement but goes down into the maxillary bone. And this one doesn’t involve the maxillary bone but has had all of this orbital involvement, which is a much more difficult fracture I would think to heal. That’s what the Le Fort I, II, III stands for. 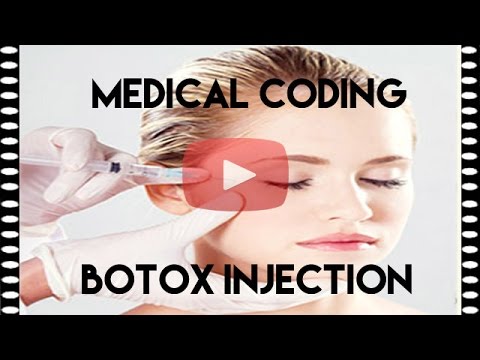 Now, what does that have to do with Botox? Let’s talk about what Botox is used for. The first thing that most people think about is Botox women get that for those frown lines in between, if you can see my picture where I’m rubbing here between your eyebrows. And the crow’s-feet on the side, or we call them “laugh lines” on the side, the little crinkly lines that you get when you smile. What that actually does is it numbs or relaxes the muscles there. Botox is actually a type of poison, it’s from the botulism which is a type of food poisoning and it relaxes or deadens muscles, is what it does.

What it does when they inject it, it doesn’t anesthetize it, it actually numbs the muscle so that those lines disappear. When they were doing this, when they found that it worked for that, they also found that it worked for several other things like cervical dystonia. This is actually a condition, the muscles of the neck causing the head to twist and it’s actually a really painful disorder. But they would be able to inject this Botox into this cervical area and it would deaden or numb that muscle to stop it from contracting and then people could straighten their heads up.

Also, it works with lazy eye, if you’ve seen people that had one eye that sways off when the other eye doesn’t, and so your eyes move and track at the same time. But let’s say your left eye goes forward and your right eye tracks off to the right, well sometimes it’s called a lazy eye and there’s conditions that distinguish it as a lazy eye versus something else, but they can go in and inject the muscle that takes care of this imbalance.

Now, the other things like muscle contractures for cerebral palsy. You’ve seen the children that have cerebral palsy and their arms and legs will be severely drawn in from contractures and they can give them these injections and that will loosen these muscles up.

Let’s see these other couple ones is this hyperhidrosis and this is actually when people sweat a lot and we don’t really think of that as such a common thing but for some people it’s excessive and not only is it just the excessive sweating but you smell bad. You also are just soaking wet. Some people have this on their feet but also on the underarms, they can go in and give them these injections of Botox and it literally dries this up because it deadens or stops that area from producing the muscles.

Another thing that it’s used for is chronic migraines. To classify for chronic, it makes a note here to say 15 days in a month, now there’s all different types of migraines. For example, 15 years ago I was diagnosed with having migraines but I don’t have migraines like other people. My migraine is kind of like an ice cream headache, but I have all the other signs and symptoms of migraines where I get blurred vision and dizziness and ringing in my ears and it goes on for days and days and days; whereas, my son who has [? 0:27:50] when he gets a migraine, he’s the classic where he has to throw up and he wants to be cocooned in dark area, no sound no light. So, they found that Botox will help that.

Now, another thing is bladder dysfunction. They found that it will help with incontinence. These are things that before we thought, “Oh, it’s all about cosmetic,” but it’s not. They found that this Botox is able to assist with several things that we may not have even thought of. But the great thing is there are codes for that now.

Let’s talk about some of the coding that can be done with this. A couple of codes that I pulled out are: what would we code as an example of migraine? So, what they call that is actually a chemo or they’re calling it it’s for chemical – chemodenervation of muscle(s); by facial, cervical spinal and accessory nerves, bilateral, and it says for chronic migraine. A specific code that’s used is 64615 for chronic migraine.

And then, you have a code, now this code is indicated, when you look up 64615 that says: If you need a code for guidance, then you need use this 95874 for a guidance code, and then you need to let them know what you’re actually using and this J0585 is the injection code for Botox, and this is the chemical name for Botox 1 unit. This is a HCPCS code. I don’t know if I’ll be able to pronounce this Botox term, onabotulinumtoxinA. [That will be fun for the person that’s transcribing this for the Replay Club to try to do]. But this is actually the term for Botox, and these are the codes that would be used commonly if you’re coding for a migraine headache and you’re giving them Botox injection for a chronic migraine.

Again, let’s go back up as we end this slide to talk about what does that have to do with this Le Fort fractures? When I was doing a little research, these Le Fort fractures, they do Botox to deal with some of this and they also do Botox for something that’s called a “gummy smile” and this Le Fort I – what that is, is when people smile and on their upper lip, their gums show when they smile. So, they’ll inject right along here in this Le Fort fracture line, Botox. What that’ll do is it relaxes the muscle so that the lip comes down and relaxes and then when they smile their gums don’t show, just the teeth. Anyway, it’s called the “gummy smile.”

I think that was why the person that submitted this question might have…was combining this Le Fort I, II, and III also wants to know about the Botox procedure. Otherwise, I was left as to questioning what the significance was as to why they were combining these two things. That’s about all I could find on those two, the Botox and the Le Fort fractures.

Coding for Basic Injections in the Primary Care Practice