Laureen: The question is on GA & GX Modifiers for PT (Physical Therapy).

Q: “I’m trying to figure out these new GA & GX modifiers and where and when to use them with physical therapy in an office setting. Does anyone know more about this? Some secondary insurances will still pay for PT after the Medicare benefit runs out, so which one do you use and when?”

A: So, the GA Modifier is basically where you’re saying that you have an ABN which is an Advance Beneficiary Notice, that you have it on file and allows you to bill the patient if the service is not covered by Medicare. So, basically, you need to have the patient sign an ABN prior to giving a service, that’s very key. You can’t like, “Oh, okay, now sign it.” The idea is that they are given advance notice that the service that you’re about to provide may not be covered by Medicare, and if it’s not, then they will be responsible for paying. 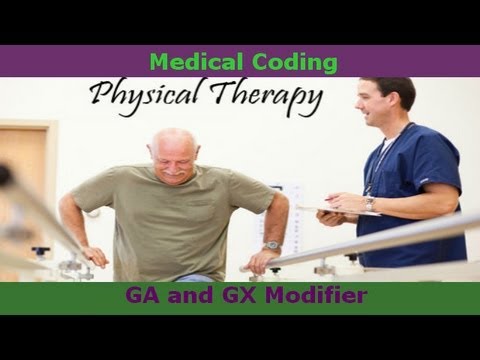 So, when you append the GA Modifier to a code that’s telling Medicare that you have explained it to patient, that it may not be covered, okay? The last bullet: Use of this modifier ensures that upon denial, Medicare will automatically assign the beneficiary liability. In other words, they have to pay.

Now, let’s compare it to the GX Modifier. This you’re only going to indicate that a voluntary ABN was issued for services that are not covered. So, in this case, the provider knows that the service is not covered. It’s not an “if or it may not be,” it’s definitely not covered. So, they have the patient sign the ABN, they use the GX. The reason why this needs to be done is when Medicare is primary, but this is secondary insurance. Secondary insurance will not pay, so you get a denial from Medicare. So, by putting the GX on it is like, “Look man, we know you don’t pay for it. Just give us denial, so we can bill secondary.” That’s really what that’s all about. And it doesn’t matter if its physical therapy or whatever, this is for all Medicare-type providers. And you can combine these modifiers with other modifiers too. You don’t just need to have this one.

Here’s a good link to the CMS website on the use of these modifiers, and also there’s another website that we found that put it together very nicely. It’s capturebilling.com website, so this will be in the transcript for those in the Replay Club. 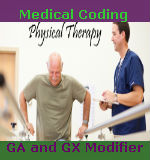