Alicia:   We were having our weekly webinar for my students and came across the term intractable versus refractory, and when you’re looking at this and just seeing a quick definition, even I got a little confused, and I said, “You know, we need to cover this at the webinar.” I need time to look into it and see if I can come up with a better definition. I was getting confused in them as well, so this has worked perfect into a slide.

Refractory and Intractable – The refractory is, when you’re reading the definitions, the one that is the best from medical terms is – resistant to treatment: a refractory case of acne. Then, intractable, the one works best is highlighted in yellow – difficult to alleviate, remedy or cure: intractable pain.

You’re kind of looking at that and when you’re not really, really looking at the words specifically, sometimes it sounds like the exact same thing. It does for me. So, what’s the difference? Refractory is resistant to treatment. So, let’s think about diabetes that’s stated as uncontrolled. What that means, and the reason that you can’t code that unless it’s documented with the term “uncontrolled” is that it’s resistant to whatever they do. They changed the insulin, they put them on a sliding scale, they’ve done their diet, they do the exercise, all of that stuff and nothing makes it better. So, it’s resistant to the treatment that they’re giving. 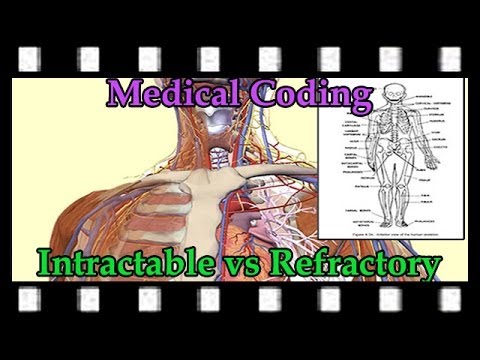 This also happens with epilepsy. A person is taking the medication and they still have seizures. But one of the best descriptions I’ve found was – and I think most of you can relate to is – bacterial resistant to antibiotics. And I found this little blurb: An alarming increase in resistance of bacteria that cause community acquired infections has also been documented, especially in the staphylococci and pneumococci (Streptococcus pneumoniae), which are prevalent causes of disease and mortality. In a recent study, 25% of bacterial pneumonia cases were shown to be resistant to penicillin, and an additional 25% cases were resistant to more than one antibiotic. So, that’s a perfect definition of that term.

Intractable – Difficult to cure. Now, see how that’s different? It’s not difficult to treat. We’re talking about difficult to cure. Acne, that’s one of the things that’s difficult to cure, that was in the definition. What about cancer, tuberculosis? Now, most of you don’t think about TB. I mean, you know if you work in the medical field, you’re going to be with a patient, or if you’re in school, if you’re at a university or something, they’ll make you go get a TB shot.

But, when was the last time you actually knew somebody that had TB? Well, actually, more people have it than you think. Not just, you think, “Oh well, yes in another countries.” But no, they actually have TB here. It’s treatable, but it’s a long process, and there’s several things can make you go wrong. So, more than a third of the world’s population is estimated to be infected with tuberculosis. Most people’s immune system can keep the bacteria in check, but there is a lifetime chance of 1 in 10 that the dormant infection will progress to TB. The disease still kills 4,000 people every single day.

Tuberculosis treatment is a combination of antibiotics taken for half a year or more, if that half a year, 6 months, a major drawback, because patients often quit therapy prematurely – I mean, when you get an antibiotic you go to the doctor and they say, “Make sure you finish your antibiotics.” Think about how many times people don’t. They get feeling better, they get busy, and they forget to take the rest of them – increasing the risk of drug-resistant strains emerging. Scientists have assumed that mycobacterial are so hard to kill because of dormant cells existing even in patients with active disease and these cells are far less susceptible to antibiotics than metabolically active bacteria.

It is curable, but it is difficult to cure. So, that’s the difference in those two terms. Now, I think a lot of times in doctor’s documentation, they use those terms interchangeably. But if you go in and you look at certain codes, these terms are in the code description. Just because you see the terms written in the documentation, you need to be aware of what the term means to make sure that the doctor is using the term properly and therefore you can code it properly. OK? I hope that cleared that up for you a little bit.

Get More Details about Medical Coding Intractable vs Refractory

CPT Versus HCPCS Codes
AAPC – Which ICD-9 code to Choose 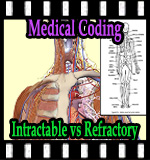