This one is kind of a brief one.

Q: Medical Coding Surgical Procedure – I was wondering if someone could give me a few tips on how to figure out the wording when coding a surgical procedure? I have the study guide but the questions that they ask without the multiple answers are where I don’t know what to look for. I really appreciate any help you may have. Thanks, Mary.

A: When you take a coding course, you typically start off with a few words, like, Ebola and you go look it up in the index. Then you start building on that. You might get a little scenario, a little blip, and then you get real report, the kind of code. A lot of times, especially with our CPC Review Blitz, we are focused on helping you pass the exam, so we do focus on multiple choice. But it does relate to the real world, in that you will go to the index, if you have a term, and it will often give you a range of codes. It doesn’t just give you one, sometimes. But for the most part, you go and you consult a range of codes and you look at those codes and you compare them and you contrast them and you see which one best fits your documentation. So, multiple choice training isn’t necessarily a bad thing. So, now you’re saying, “Woo! Now I’m out on the real world and no multiple choices. Where do I start?”

So, I’m just going to take a quick report that I Googled earlier. This is what first came up, it could be any report. Apparently, this is a sample where they’re trying to help their physician know an acceptable operative report is. Physician education, coders get involved in it.

This is a typical layout. We got the patient’s name and address — their demographics – their name, the date. This is where you want to start, you don’t want to just code here. But these three things: preoperative, postoperative, and procedure – these are the diagnostic and procedural statements that you will be starting your coding from. So, I believe the question was focused more on the procedure, so I’ll focus on that.

So, here’s the statement – and don’t get excited. The doctors don’t give you CPT code. It just happened to be on the sample – bilateral upper lid blepharoplasty, so they’re getting an eyelid job. What you would do as a coder, you don’t read the whole report, not yet. You go and you start with the statement, because this is what Dr. John Good said he did. So, you go to the index and you look up probably “blepharoplasty, upper lid” and you come up with your code and you might find that there’s one or two, or maybe three different types of blepharoplasty codes. If you don’t have enough in this statement to pick one, then you go and you read the body of the report. They call it abstracting, you’re abstracting the info that you need to get the correct code.

Now, you do read the op report to see if there’s anything extra that the physician did that you should code also. Where your skill comes in, as you start to learn things, like, an oophorectomy (removing an ovary); then, you see “Oh, they did a laparotomy. I should code that.” But what you learned in coding is – no, you don’t code the approach, you don’t code the path to get there. So they opened the abdomen, “laparo,” right? And to get to the ovary, you remove it, the oophorectomy; then, you don’t code the laparotomy. It’s bundled in. As you’re reading the story, that’s what you’re skimming for, just coding some extra stuff. If you find that, then you go ahead and code it.

Now, you could go ahead and code it and then maybe pop it into a CCI checker, which that’s the Correct Coding Initiative. It’s where they basically tell you if the Medicare considers the two codes bundled, where one is bundled into the other. And that’s how you learn. So, this is actually what we do in our practicum course, we use Practicode as the background for the course and you code live cases like this. You log in as if you’re a remote coder, and on the left-hand side you’ve got your note and your demographics on the top, they’re made up of course because it’s practice. And then on the right-hand side, you’ve got a box to pop-in your diagnosis codes and your procedure codes. Then, you hit submit. 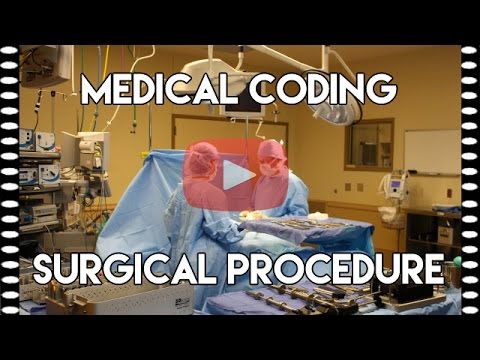 Now, if you’re a real coder, off it goes and your next report pops up. But because this is a training program, the rationale pops up and it gives you a score on how well you did, and then you learn from it. You go, “Uh-oh. I coded a CPT code and they’re showing they’re bundled.” And you read the rationale and you figure that, and you go onto the next one. And you keep doing that and you start to build up your proficiency and your speed of coding real cases, not multiple choice scenarios but real reports for a real need to be a remote coder. So, we’re so excited about Practicode. It was a year ago, if you can believe it, that we had announced working with the Practicode folks. Now we’ve bundled it into a course which includes a weekly class that Alicia conducts and it’s been going on really well, they go over cases. So things like this, if you want extra help and you’ve got one like that, say, “Alicia, here’s one,” and you give the record number where it’s located in Practicode. She will pull it up and you’ll go over it together and break it down, so definitely a very good help.

Alicia: And another thing while Laureen was talking about that, that made me think, even when I first started coding, I’m so excited. I know you can imagine me being excited, but you know getting to code especially diagnosis codes, you will see inpatient encounters. All of these things you know you can code, “Oh, they had a fever,” “Oh, they had swollen feet,” oh they had this, they had this. Then you learned that you can’t do signs and symptoms if you have a definitive diagnosis, and that’s the way you learn with this as well. You see these encounters and you want to code everything, and then you have to pull yourself back, and like Laureen said, it’s bundled. You can’t do a laparotomy in, you know. You don’t get to code for them looking around whether they’re going to take out your appendix.

Laureen: And here’s a screenshot of Practicode under Info page, it’s https://www.cco.us/practicum and you can see the document on the left-hand side, and on the right hand side is where you pop-in the code. That’s not probably very clear, but it gives you an idea of what it looks like. Now, the interesting thing with this is that the makers of Practicode is a remote coding company called Aviacode.

Laureen: And Practicode is a scale-down version of the real application that their coders use, so they will consider your proficiency score. And the way Practicode works is you go in and you look at what, let’s say, orthopedics or cardio, and you decide “OK, I’m going to become proficient at this specialty.” If you just focus on those cases, you pick that module and you code one, you code the next, you code the next, you’ll be painfully slow initially. And then you pick up speed, speed, speed, because that’s how real coders start.

You got to start somewhere.

And now you have this proficiency score, you can apply for a job at Aviacode and they want you to be certified. But if you have zero experience, you can say, “Yeah, but I did the practicum with CCO and I got my proficiency up,” and they can actually look it up and say, “Oh, yeah. The last 30 days your proficiency’s gotten up to 92%, [you’re] hired”!

So, if they have a need, they need coders, they’re getting new contracts all the time, so that to me is one of the pieces. A lot of the courses we built and done had to do with pain points, like, “what are our students experience out there that’s a pain point”? One of the pain points is: How do I get that first job? So we wrote an eBook on how to help you get that first job. Then, it was like we were going to try and build something like Practicode and then Lori Woods, she runs the – what’s her Facebook group called? Don’t kill me, Lori.

Laureen: If someone sees it in the chat, let me know, Boyd.

Alicia: That is weird. I’m always looking at it [laughs]. practice, and take advantage of the weekly classes because that will really help you get the most out of it. I was coming here for a reason, now I forgot.

Alicia: I think to show them where the Practicode courses, maybe.

Laureen: No. We just did that, or something else. I’m sorry. Something I wanted to show them on the main site, but it just left me. It will come back.

Alicia: Because your brain is so full of knowledge [laughs]

Laureen: So, you know, Bob was out there talking about it, says, “You’ve got to talk to Laureen.” Thank you, Create a Coder; I am going to get spanked so badly, so it’s Create a Coder. https://www.facebook.com/groups/470366946375278/. And we had a chat and on that night, literally, we were a year ago showing you on screen and he did a free giveaway and it’s been really great. But you got to use it, got to get in and you got to do the practice, and take advantage of the weekly classes because that will really help you get the most out of it.

I was coming here for a reason, now I forgot.

Alicia: I think to show them where the Practicode courses, maybe.

Laureen: No. We just did that, or something else. I’m sorry. Something I wanted to show them on the main site, but it just left me. It will come back.

Alicia: Because your brain is so full of knowledge [laughs]