Next question is skull base surgery codes and modifier 51. Laura asks: How do you accurately code surgery of the skull base. Are your definitive codes considered to be a lesser code and is modifier 51 needed? Excellent question. This is a great medical coding training question. So lets go to my answer page. 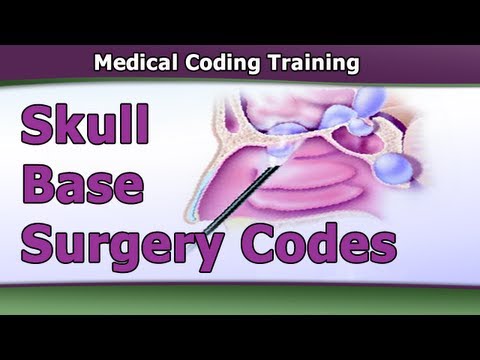 What I did was a kind of scan of the code, I said bring it with me to the hotel because I don’t have my document camera and this is basically page 312 and these are the guidelines. So the first thing we are going to answer is about the modifier 51 if we need it or not. Surgery of the skull base, if you picture where your head connects to your neck and if there was a lesion in that base of the skull, how would you get to it, its not like a lesion on the arm or the back where its very easy to access. So since its so complicated you really need a surgeon that has a certain skill set to be able to do that and then another surgeon normally is the one that takes care of the lesion or tumor or whatever it is that they are trying to remove.

So, if you look at the guidelines it talks about approach procedures and definitive procedures. Approach procedure is described according to anatomical area involved and the definitive procedure describes the repair biopsy, resection or excision. So normally, according to guidelines, the surgical management of lesions involving the skull base often requires the skills of several surgeons of different surgical specialties working together or in tandem.

These operations usually are not staged because the need for definitive codes, obviously they are going to get the area exposed, they need to go in and take care of the lesion. So, there are two codes. Let me just skip down a little bit to the screen shot of the actual code. So here you can see approach procedures, and this first one, 61580, craniofacial approach. That’s one type, the anterior approaches, the middle approaches and the posterior approaches. Then you have the definitive procedure. You can see my notes here, the definitive procedure must relate or link to the approach procedure.

However if one of the surgeons, these are from the guidelines, performs more than one procedure i.e., the approach and the definitive, then both codes are reporting adding modifier 51, right there in the guidelines, secondary additional procedure. So I suspect you already knew that but you were just confirming it and then what you want to know is…ok when we have modifier 51 we normally put it on the lesser valued code because you pay 100% of the first surgical code and then 50% of the subsequent ones and 51 would do that so how do you know the value because her other part of her question was “are the definitive codes considered to be lesser codes so lets take a look.

I went to findacode again and I just used an approach code 61580 and a definitive code 61600 and sure enough the approach code has a higher RVU because if you think about it, its actually harder to get the area exposed and get to it than it is to go excise the tumor. So, how did I know that? I went to the MCCI edits validator and it gave me these two things, I use that not because I was checking MCCI edits but because I knew it would give me both codes like this I can see the descriptions stacked on top of each other and here are the RBUs. The craniofacial approach has a RB of 78.77 and the definitive Procedure, the resection, has a RVU of 67.89. Both are very high because after all, this is brain surgery so that’s how this breaks down. 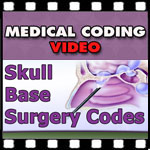