Boyd: Hello Ruth, how are you doing tonight?

Boyd: And are you indeed in Poughkeepsie, New York today?

Ruth: That’s right. That’s where I live. It means ‘hut by the river’, near the Hudson River.

Boyd: Oh awesome. Did you get affected by the weather that was recently going through the area in New York?

Ruth: Not so much. I mean, we did get a lot of wind and some rain and there were power outages. But I was not affected, fortunately.

Boyd: That’s great. And our… of course, our condolences and support to everybody who’s going out there tonight who might be still recovering from that. So our prayers and thoughts are with you. So Ruth, tell us a little bit about yourself and where you are in the world right now?

Ruth: Well, right now I work for CCO. I’m the admin specialist. But when I graduated from college, I was a computer programmer which I did for about 12 years. And I met my husband where we worked and we eventually had children. I have a grown daughter and a grown son but they don’t live near us. One’s in New York City, one’s in Colorado. And we lived… so most of my life, I had lived in either New York state or Pennsylvania and 2 years in Denmark which was very interesting.

Ruth: And when I came back from Denmark, my kids are still young and I did work part time. And I did find some work, doing web work for people with my computer background. But my mother got very ill and I spent… consumed a lot of my time. And so I just didn’t work very much. I was pretty much a stay at home mom and taking care of my parents. And then I got interested into wholistic health counseling which is a matter of you know, teaching people to eat a lot of vegetables and have a good healthy diet and exercise and to do things for their stress. But that, I never made a lot of money with and I decided I would do something different. But I have had a lot of Anatomy and Physiology with that and I decided I’d try medical coding. So that’s how I got interested in medical coding. 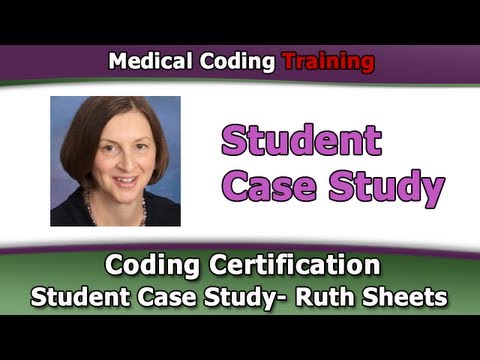 Boyd: That was… how long ago was that?

Ruth: Not that long ago, just August 2011. I started with a course. It wasn’t a very good course. It was an online course and it just had some problems in that. It was very out of date and I found that very frustrating. Plus, there was no one to ask questions on. And so I sort of dropped it for a few months and then I found this great company that Laureen had and her… it was just Blitz videos because I thought I could maybe learn from those… eventually… just whole PBC course, the Physician-Based Coding Course. And I really liked it and I really learned a lot from it. And so that’s how I got my medical coding training… in just relatively few months, I was able to go through the course and then take my CPC exam which I passed easily. And I had done a lot of studying from the course because there’s a lot of material in the course and it was very helpful. And it was very helpful having a coach, Alicia, she was great because I always have lots of questions. I’ll read something and… I mean, I’d read things into it or sometimes… occasionally, I’d find an error in the book. So I would tell her and you know, I was really sure it was an error. But you know, sometimes I was right, sometimes I was wrong. But she would always explain it to me. So it was very helpful and a very great way to learn, I think.

Boyd: Awesome. And so what would you say to the new coders that are on the call tonight you know, so what are the things that you learned that you took out of the course that you used you know, to help pass your exam? A lot of people talk about time management and those things. What are those important things that you… for you?

Ruth: Okay well I did use the Blitz videos and I have found the Bubble and Highlighting™ technique to be extremely useful because I could remember what Laureen had said on the DVDs which I was using for the Blitz. And I could remember it just by looking at a few words in my manuals and remember what she said about it. So it was very helpful just having things in bubbles and she would compare things and just keep that straight for me. And I would be able to remember it just looking at my books. So that was very helpful.

I did take some practice exams and the one that CCO sells now is one that I took. And I also took the ones from the AAPC because I think they were writing the exam. They may have questions and practice exams that would be similar. And I did find that to be the case. So I’m just glad I had done that.

So as far as taking the exam, what I did was I was… somehow I learned that there’s a bunch of questions that are relatively easy. It was easy for me, the anatomy, medical terminology and some of the… just coding concepts that were towards the end of the exam generally. So I flipped to those right away and I did those because I knew I could do those fairly quickly and get them right or I think I’d be right. So that was very helpful.

But when I was studying the practice exams, I would keep notes on what I had missed and lots of times, it was just in general terms. And I had a whole page of read the notes with an exclamation because I would miss things when I was taking the practice exams because I wasn’t careful enough to look through the notes under codes and just keep that all straight. And so when you see that as some of the things that you repeatedly did wrong then you learn not to do that. And occasionally, I would read a question too quickly and I would mix up the you know, -automy with –ostomy. You know, different terms that are very close. And so you have to make sure that you do that in the exam. And if you realized you have a tendency to do that then learn from it.

Boyd: And we have a new course coming out which is… going to be put out by Rashid and that will be “How To Pass the CPC Exam Phase 2” coming out soon. Great tips, Ruth. Thank you so so much for sharing that with us tonight.

Laureen: Yeah, I just wanted to add that Ruth you know, is downplaying her picking up on errors in the book. She found everything. And Alicia like, “Oh my God, this girl is like phenomenal. It’s like she was going through the questions like with a net comb. She finds everything.” I said, “You know, I think I should hire her.” So when she was done, I asked if she wanted to work on a project and that kind of led to another thing. So Ruth helps us out part time and she moderates the discussion board along with Alicia. And she… when this webinar is done, we get it transcribed. She edits the transcription so that it’s like as perfect as it can be for you guys in the Replay Club. And helps with the newsletter, getting that out every month. So she really is an integral part to the team and we’re very glad to have her. So… but if you have any questions, go to our discussion board and Ruth will be there. 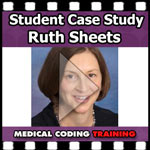