Laureen: Next question, modifier 59. This is one of our favorites, it keeps popping itself up.

Q:  “Hi, can you talk about modifier-59 a bit. I seem to be one of those that overuse it. I have gotten a few questions wrong by adding it. I have the modifier download,” she is talking about our free giveaway “it is very helpful. Maybe a couple of examples of when it is appropriate to use and when it is not, so I can see the difference. And you always have tips that are easy to remember. Thanks so much.”

Medical Coding – Use of Modifier 59 – Video 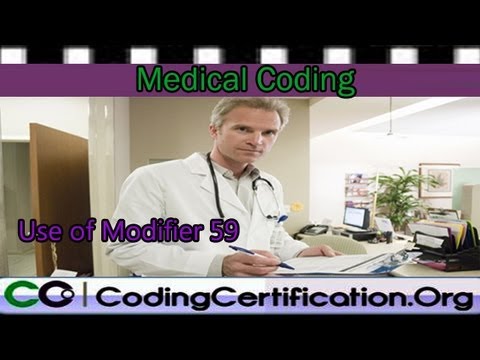 A:  So, this is some information I pulled. A lot of times, when you’re trying to research questions for yourself, it’s good to go to the most respected sources. So, CMS is a pretty respected source. They have this Medicare Claims Processing Manual. All this is available online. And we have talked about in previous webinars how to do searches and things like that.

So, I found this information, it’s in Chapter 23 under Section 20.9.1.1B. It’s a government, what do you expect? It says: “59 is used to indicate a distinct procedure that could be performed in the same encounter or different encounters.” An example that I use in teaching is, from my own experience, unfortunately. I had an oophorectomy (as in ovary removal). It was an emergency one, they removed it, bring me back to the room. And my vitals went funny and they had to do an exploratory lap, to see what was going on and to stop some bleeding that was going on.

Normally, the laparotomy is bundled in to the oophorectomy because it wasn’t a scope procedure, it was an open procedure. As you may know, the approach to a surgical procedure is always bundled in. You don’t code opening them up and then code removing whatever it is and then code closing them up, it’s a bundled situation.

Now, in my case because I had to be brought back to the OR and they had to open me back up, they really did two laparotomies. So, in that case, they would bill the second laparotomy separately. But if a payer saw a laparotomy and an oophorectomy they think “They don’t know what they’re doing, these two codes are bundled. We’re not paying for the 49000 (the laparotomy).” But we as coders, if we put modifier-59 that’s our way of telling the payer that this looks bundled, but it’s not. This is done in a separate time in this case. Same date of service, but different time of day. OK? That’s just one example.

Another one I use a lot is about lesion removals or something like that. If we can use RT or LT or some other modifier to tell the story to the payer why it should be paid, we are to use these modifiers before modifier-59. Modifier-59 is a modifier of last resource. Always look for other modifiers to tell the story you’re trying to tell, if you can’t then use 59. So, if you have two lesions on the right forearm and they’re both removed, you’re going to have… You also, maybe it was some injury; they were on a motorcycle and had a crash. So, they may be doing some removal, maybe some stitches. If you do a lesion removal and stitches, stitches are bundled into a lesion removal, at least simple repairs are. So we have to put 59 on a simple repair code to indicate, “No, no, no. This is separate from these other codes being reported.” So, that’s another way you can use it.

So, the official definition is: “Is used to indicate a distinct procedural service. The physician may need to indicate that a procedure or service was distinct or independent form other services performed on the same day. This may represent a different session or patient encounter” we kind of talked about a few of those examples, “different procedure or surgery, different site or organ system…” something makes it separate and distinct. That’s when you would use modifier-59.

Here’s a rationale I found out on the web: “Multiple services provided to a patient on one day by the same provider may appear to be incorrectly coded, when in fact the services may have been performed as reported. Because these circumstances cannot be easily identified, a modifier was established to permit claims of such a nature to bypass correct coding edits.” Not to help you get paid but to tell the story so you got paid properly.

The second bullet: “The addition of this modifier to a procedure code indicates that the procedure represents a distinct procedure or service from others billed on the same date of service. In other words, this may represent a different session, different surgery, different anatomical site or organ system, separate incision/excision, different agent, different lesion, or different injury or area of injury (in extensive injuries).” So, it can really cover a lot of different stories that you want to tell.

Now, as far as which code to put it on, you’re going to put it on the lesser RVU value ones, or the one that’s not expected to be paid as much. You want to list that second and put your 59 on that one. So, what I do is I go by the RVU. I just sort my codes by RVU value and the top surgical procedure code gets listed first with no modifier, and then the subsequent one that I’m trying to tell the story is not bundled in to other, I’ll put a 59 on.

You had asked for examples in your question, so here’s one: “A colonoscopy is performed on a 51-year-old patient with a family history of colon cancer. Multiple polyps were found during the procedure. Two polyps in the transverse colon were removed with hot forceps cautery.” That’s one method hot forceps. “Three polyps in the ascending colon were removed via snare.” So, two different techniques but they’re still removing polyps. “Portions of all polyp tissues were to be sent to pathology.”

The answer is 45384 and 45385-59. We can code both of these because the one code represents the hot forceps, and the other one represents the snare technique. OK? The payer might try and bundle them together, but by putting the 59 on you’re saying, “No. These are in two distinct areas.”

The next one, I want to put up the questions here. I’m going to pull up a poll, which one would you pick? Would you pick A or B? Focusing on the use of 59. We’ve got…come on voters! Alright, we got 39%. Just take a guess. We won’t hold it against you. We’re not going to tell anyone what your answer is.

I got Bob texting me; we got some good news to share at the end.

For those on the Replay Club, you probably want to come back and chew on this one a little bit.

So, that was our modifier 59 question. 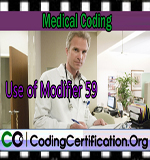