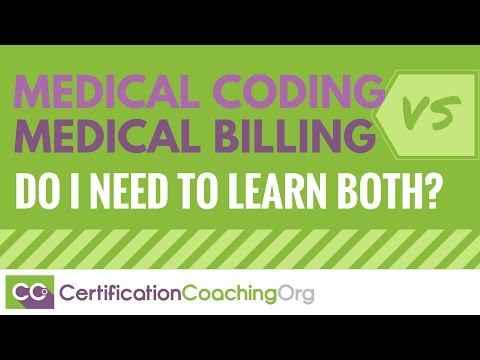 Alicia:  I take calls that come in for people wanting to know “what’s the best path for me” and after I ask a few questions, then you get a feel for a good fit. This is a very common question, do I go into billing, do I go into coding, do I go into both; which one do I do first? We’ve always said it’s kind of like comparing apples and oranges, they’re both fruit, they both taste good, you can put them both in a salad [laughs]. But they are separate. Keep in mind that if you know billing, it makes you a better coder. If you know coding, it makes you a better biller, so they’re sisters. I even have someone call me and talked to me the other day and said, “I heard they’re sisters.” I was like, “Yeah, I’m always saying it – they’re sisters, they’re sisters.” So, it’s very advantageous to you to do both, if that’s within your means.

Laureen:  And coding is a part of billing.

Laureen:  When you go to do the billing curriculum, you’ll have introductory chapters and then you’ll have a chapter or two on coding. So, if you’ve already done that in the course, now you can breeze through that, that chapter.

Alicia:  It makes sense to you.

Alicia:  I’ve had people that have done the billing and they get to those coding chapters and they’re like, “Oh, that doesn’t make any sense. I even opened that book.” Again, the coding, our PBC course is perfect for the person that’s wanting to do both, we have a bundle for that. There are people that get in there and say, “I just love the billing. I enjoy the billing.” Honestly, I think it’s easier to find a job in billing because there’s such a turnover, not a lot of people like billing once you get in there. It’s repetitious but you’re always getting rejections. It’s all about rejections and clearing that up as quickly as possible.

The Difference Between a Medical Coder and Medical Biller 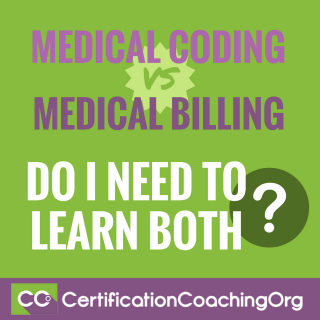 Laureen:  It’s like accounting. It’s definitely the financial side of things. Let’s talk a little bit about what a coder does versus what a biller does. What a coder does is they’re like a translator and they’re taking the medical document and they’re translating that language, those phrases, the diagnostic terms, the procedural  titles and they’re translating it to code numbers. So, for diagnostic, they’re using the ICD-10 manual to translate that into an ICD-10-CM code. For the procedures, they’re normally using CPT if it’s for physician or outpatient services. If it’s inpatient, they’re going to be using ICD-10-PCS, that’s the procedural coding system used on the inpatient side.

That’s what coders do, they’re translating that medical record into those codes. There are some specialty-types of coding knowledge, like risk adjustment or for inpatient like DRGs where it’s another layer of translation where you’re like now taking the codes and grouping them into these special groups that will affect reimbursement, so if you add those extra skills you’re more likely to have a higher paying job and be more in-demand. That’s the coding side of what you’re doing, that translating service.

Some coders also do billing. It depends on how big the practice is. If you’re working for one or two physician practice, you very well might be doing both. Oftentimes, coding is a function of a larger job, so you might not go look in the one ad for medical coder, it might be another title that coding is a part of it. That would be that aspect of coding.

What a biller typically does is they will take those codes and put it into a billing software program. They have to also make sure a lot of “i’s are dotted and t’s are crossed” like, collecting the insurance information and keying that in. Knowing what the deductibles are. That’s why they always ask for the card when you go in the doctor’s office because they need that information to input into the system, and knowing is there a secondary insurance, questions like: Was this related to an accident? Like, say, it’s a fracture in the orthopedics, they got to be really on their toes and stuff like that because who’s responsible for paying. It was an auto accident, it might be auto insurance. Those are the kind of things that billers think about.

Like Alicia said on the other end, post-payment processing. Maybe you’re dealing with when the EOBs (Explanation of Benefits) it’s basically the remittance advice that comes with the payment. The doctor’s office opens up, “Yey! We got paid” Now, they got to take that remittance advice and apply it, like, “OK, this is from BlueCross, BlueShield, it’s for $1200. $200 was from Mrs. Smith, $100 was from Mr. Jones,” and you have to apply the payments in this billing program properly and have it balance out. So, it is a lot of accounting-type number stuff.

Alicia:  Coding is a lot of documentation reading, you’re reading the medical records, documentation. Whereas, billing is a lot of filling in the blanks; you’ve got your computer and you’re literally typing in and filling in all the blanks. As Laureen said you’re making sure that everything is in its proper place and it’s the most current information.

Laureen:  A lot of follow-up.

Alicia:  Yeah, exactly. You can’t have one without the other; the coding comes first, the billing goes next.

Laureen:  Many times in big organizations, you’ll hear this: “The right hand doesn’t know what the left hand is doing; the coding team isn’t talking to the billing team” because maybe those post-payment processors they’re getting denials and they’re just writing off the denials when they’re never communicating back to the coding team that there’s a problem that should be addressed. Or maybe there’s some physician education that’s needed to make sure that the better diagnosis are being abstracted from the report. Maybe the physician is asking the patient certain questions, but they’re not documenting it. Well, if they’re not documenting, it wasn’t coded; therefore it affects the claim.

So, all of this it’s very involved and that’s why someone who is trained on both worlds normally is going to be in management because they get the big picture. That’s why a lot of people will take this package here, our Medical Coding and Billing bundle where we bundle both those courses together with the medical terminology course so that you can be this well-rounded individual, and you might not do billing but now you’ve learned how it works. You understand the pieces and you know why it’s important for medical necessity, you have the right diagnosis codes supporting that procedure, that sort of thing.

Alicia:  You could take the training and get your CPC and then go out there and let the potential employer know, “I am a CPC. I’ve been trained in billing and I’m going to sit for the billing credential in the near future.” That will make the little ears perk up, “Ooh! So you can do the billing, too.” it’s all about the money.

Laureen:  Julie is sharing, “I think there’s a lot more opportunities for professional growth and higher salaries taking the coding path.” We agree. But I do feel knowing billing has a place and there’s people that actually start their own billing company. We’ve had a lot of people come through our training with the intent of hanging their own shingle and going out and getting clients and they’re doing quite well. But this is where they start it, they learn the coding, they learn the billing and they might not actually be doing the coding but they’ve hired a team of people to do it and they manage them.

Alicia:   And they know the lingo and they still garner respect from their employees because they know they’re credentialed.

Laureen:  Right. Do you have to know both? No. You could just do coding, you could just do billing. We normally tell people, if you’re on a budget and you’re not quite sure, it’s like going to college and you’re not ready to declare your major, we find starting with the CPC credential as your core credential. It’s a great starting point. All of our programs, you get linked up with a coach, and the coach helps guide you. So when you get to, like, the midway point and you’re going to be having these conversations, like, “OK, you just took the E/M test and you did really well.” If Alicia is your coach, she might say, “Hey! You might want to consider auditing. You really seem to do well with E/M. Not everybody does, some people really struggle.”

Alicia:  And those are exactly what I say.

This segment “Medical Coding vs Medical Billing: Do I Need to Learn Both?” originally aired on Live with Laureen #012.

2 thoughts on “Medical Coding vs Medical Billing: Do I Need to Learn Both?”