Medical coding question, modifier for assistant/RNFA surgery. Stephanie wrote: “Hello I have a question. I’m having trouble getting my second assistant paid. The main surgeon bills charges, we bill duplicate charges but 2 assistants from same group help surgeon, both assisted. My question is for my first assistant I use modifier AS, but I’m having trouble getting my second assistant paid. They state for second assistant I need to use correct modifier but I don’t want to use a surgeon modifier because this is an assistant, a PA [physician’s assistant]. Even when I appeal with records they state I need to add a correct modifier, can you help with this?”

OK. Here comes the answer sheet…Assistants at surgery modifiers. I found, I think it was from 2009, article on the AAPC about this assistants at surgery modifiers. Basically, you’re going to have modifier-80. I’ll show you the choices first: 81 minimum assistant, 82 assistant at a teaching facility, and AS – this was the one that she was talking about which by the way, it took me a while to figure out her question because she didn’t have AS capitalized. I kept going, “I use modifier as, but I’m…” I finally figured it out. So, do us a favor when writing questions, capitalize when it’s important. 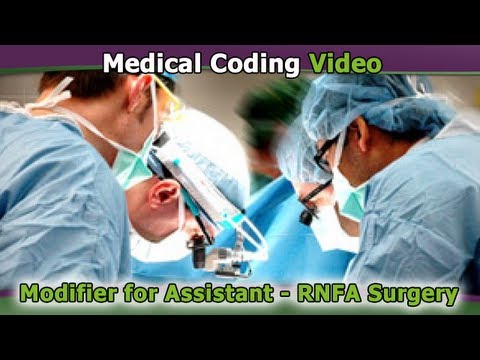 Let’s review what this is telling us. So Modifier-80 is the typical modifier you think of for assistant surgeons. You have a primary surgeon billing a procedure and then you have someone that’s assisting that primary surgeon. They both use the same CPT code. But the assistant puts an 80 on their code. The private payers will typically pay 20% to 25% and Medicare pays like 16%. Medicare has on their website the CMS website, a Medicare physician fees scheduled database, something like that. They’ve got columns for every single HCPCS code, meaning HCPCS level I which is your CPT codes and HCPCS Level II which is the HCPCS Level II manual.

Next to all of these, they will let you know a whole bunch of things about the code, but there is one about assistant at surgery. You’ll also find it in your encoders like SuperCoder or Find-A-Code; all of those will take that Medicare CMS, that table and put it into just more user friendly format. So, not all surgery codes warrant having an assistant. It doesn’t mean that you can’t have an assistant help, but it doesn’t mean that they will pay for it. So, it’s all about medical necessity. When you get on the CMS site, you’ll read things like, they do studies to see how often assistants are needed for particular procedure. If it’s not that often, then they will, in the future years, probably not allow it. So, that’s 80.

Now, here’s a little blip about Medicare and modifier-80, they restrict the use of it to the primary procedure. So, if the physician, the primary surgeon did more than one procedure, they’re only… for Medicare letting the assistant bill one of them – the primary one with modifier-80 and they get 16% of the fees schedule.

There’s this other Minimum Assistant At Surgery. Medicare doesn’t recognize this, but some private payers do. They put 81 on. It’s kind of like a pecking order. I’ve always explained it in my modifier lecture that they’re kind of like your openers and your closers; they don’t stay for the whole thing.

If in your facility, there are no trained residents to assist for that surgery, then they will let a non-resident physician be an assistant and they have to use a modifier-82 because it puts onus on them to say, “We’ve got documentation that none of the residents that we currently had on staff were qualified.” Not that they were busy, not that they were doing rounds, or getting a Coke down the hallway, that they were not qualified to assist and therefore a nonresident physician came in to assist. I used to say a real physician, but that’s not very nice because residents are definitely real physicians. They’re just newer and they can’t be billedl for yet. So that’s how modifier-82 works.

Modifier AS-Assistant at Surgery – These are for your PA (your physician assistant), NP (nurse practitioners, or clinical nurse specialist). They can also be assistants at surgery and they are identified by putting an AS after their surgery code. This modifier may only be submitted with surgery codes and additional documentation is required. This is the documentation, according to this article, that they’re looking for a statement that no qualified resident was available.

There are some limitations with this, but this is a good article and let me click on the link so you can see it in context. It’s the news that AAPC.com, oh, it’s 2008.

While it’s doing that, just to go back to the question, when I looked at what people were saying in other discussion boards, they’re kind of like you really can’t bill for two assistants except in rare circumstances like some very complicated cardiothoracic procedures is it allowed. Oftentimes, you have to send in, in documentation.

So what I suspect is going on here for you Stephanie is that they just aren’t considering the second one medically necessary, so I would bill the ones that would give you the most return. So, if you have a non-AS physician, then I would use the regular 80 code before the AS. So, hopefully, that helps with that one. 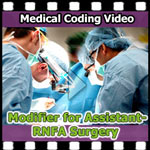