Multiple Diagnoses in One Category – this can confuse people a little bit. You can use multiple codes for one category.

So, looking at this one, the example that was given, I got happy with picture this webinar so I had this lovely little picture. Coding in the same category – and I can see how this is incredibly confusing, because I debated with myself on this particular one. 786.51 is chest pain; precordial pain. Use this code to report precordial pain, or chest pain over the heart and the bottom of the chest below the left nipple. So you can kind of see where she is grabbing. This would be like a classic heart attack sign. They’re having pain there and they call it sternal pain is what they do and it kind of goes up and around your side a little bit. 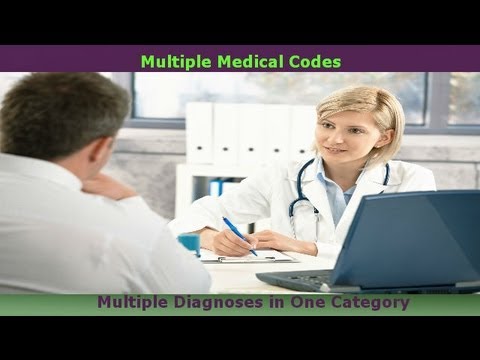 786.59 – Chest pain; other. Under that they’re listing discomfort in the chest, pressure in the chest, tightness in the chest. This excludes pain in the breast because it’s not locational, it’s the type of pain. They’re saying this is the chest area. Other forms of chest pain or discomfort, such as tightness of the chest – that’s all going to be included in 786.59.

The situation that this code have come up with was patient has substernal chest pain radiating to left shoulder. And when pain is at its worst feels pressure – that’s the information she is given and actually both of those codes describes that. The 786.51, if you put in substernal chest pain it’s going to bring up 786.51 in your index but it’s also going to bring up 786.59 because they’re in the same category, they’re in the (.5) category.

So, if we scroll down just a tab here and we look at where this pain, sometimes you just have to know where the pain is located to be able to determine which is the best code. You can use both codes, by using both codes you’ve reached the highest specificity. But it’s always best to query the physician if you’re not sure.

Look at this where the substernal pains occur. You’ve got the upper chest, you’ve got – if you’ve heard anybody talk about or worked with people who had a heart attack, this is where they feel that pain radiating into the neck and jaw. But that sternal pain is right there in the center of the chest radiating down the left arm. Then, you have also this one that has it right in the middle of his chest, that’s actually epigastric. It will say substernal epigastric. Then, you’ve got the epigastric radiating to the neck, jaw, and arms; neck and jaw; left shoulder and down both arms; and intrascapular.

So, if you know where, if you can look more at the note because we’re just given more or less one statement in coding; but if you go through the whole chart – I mean, the whole case, you probably get a better description somewhere of where that pain is and you’ll be able to code it better. But, for this one, he is having substernal chest pain and then it’s radiating up into the shoulders – looks like that third picture – and then it feels like pressure, so the first code wasn’t for pressure. It’s just saying he has pain and it isn’t designated as what type of pain but both of those are very pertinent to what you need to code because people can have different types of pain reveals to the doctor what actually is going on.

People can think that they’re having a heart attack and let me tell you if you ever had an ulcer, any type of epigastric ulcer stuff it feels like a heart attack and it can radiate down your left arm. I’ve had that and I thought I had a heart attack; I would break out in sweats and stuff like that. But, there were certain clues that told them that that’s not what it was and I never felt pressure in my chest, pressure feeling like the Empire State Building is on your chest is a classic heart attack sign, so pressure is very important. If I was just given that information not able to query the doctor for further information I would use both codes.

That’s it on that one. 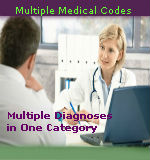