A: It’s actually not as difficult as you think to understand them, but it is a little confusing. This is not something you think about too awful much. The National Coverage Determinations and the Local Coverage Determinations are decisions by Medicare and their administrative contractors that provide coverage information and determine whether services are reasonable and necessary on certain services offered by participating providers.

Now, I had a little breakdown of the National, the steps that you get a national coverage. Its start out with the preliminary discussions, there you can see that in that box. And then, it goes what’s the benefit category, national coverage request, staff reviews it, they got a draft going, they get external assessments, they have an advisory committee, which those two words right there will tell you what coverage process that is. Public comments, they have staff reviews. They can come up finally with final decision, and they have appeals board, if that doesn’t go through. And then, it can go through reconsideration and all the way back to discussions again. 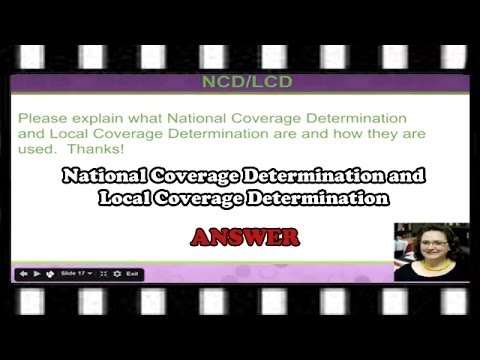 And look, this just one little area right here take 9 months, can take 9 months. It’s not something that it’s done quickly.
Local Coverage Determinations – here’s a slide that I picked up from another presentation and this was strictly for vestibular and auditory testing. Now, Novitas, First Coast, Palmetto, and I think that’s called Noridian – these are payers. And when we were down at Texas, Palmetto was the provider for Medicare down there. But this is them talking about what they’ll cover. And local coverages, their determinations run – let say they currently exist in the United States for vestibular and auditory testing. This Novitas and those covered under the Novitas have a local coverage determination, so it’s not that big group of people, it’s a local group that’s done geographically.

First Coast in Florida they do – let see, I’m not going to be able to say this, you guys know I stumble on some of these words (tympanometry) – but this is where they test the eardrum. They also have a vestibular testing along local coverage determination, and this one for, the code exist for Palmetto and Noridian.

Now, I did pull up a website and I don’t know if this link is going to work for us, but let’s just see. It is. AACE.com. Let me check and see if it’s going to come up… and there it is. I actually just went out and googled this, NCD and LCD is what I put in the Google search, and this came up from an organization. It actually gave you step-by-step what it means from what are they, what’s the difference between the two, what’s the difference between the local coverage determination and the LMRP – which is a review policy – and then just more details.

So, what I would advise you to do, if you are still confused about what they are, go ahead and just Google that. Again this is the American Association of Clinical Endocrinologists, that did this particular write-up for their people, and you can get more information. Not that big of a deal. What’s nationally covered and what’s covered locally in your area?

Online Medical Coding Courses: Learn in the Comfort of your Home