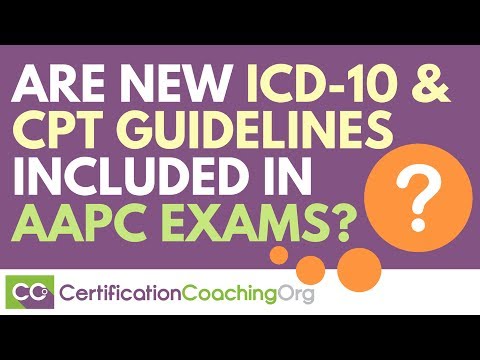 Laureen: Here’s how it works when you cross the threshold into a new year. It’s our standing that the AAPC takes the exams that they’ve already invested many, many man/woman hours into vetting and creating for a good test experience and they will take those questions and they’ll go through them with the 2017 manuals, and make sure they still work for the 2017 manuals. And if they don’t, they’ll rework them, they’ll tweak them a little bit, but they’re not rewriting brand new exams every single year. That would just be prohibitive. That’s how they’re doing. So, they’re not going, “Oh!  There’s all these changes in cardiology, let’s make all the cardio codes, the ten questions we’ve devoted toward cardiology and make it all on the new stuff.” That’s not how it’s been done.

Over time, yes, if there are some major changes, they’ll bring in a code probably the following year.  We don’t know for sure, they don’t share that information with us, but I do know that it’s pretty much the same exams that they’re vetting against the new manual. So, don’t freak yourself out about, “Oh, now, I got to learn all the new stuff.” CPT had a good amount of changes, but it wasn’t horrible.

Chandra did a phenomenal 2017 CPT update and we’re getting really good feedback from people, that there’s lots of CPT updates out there. For years, my students were saying, “Is CCO going to do an update?” I’m like, “Really? There’s so many out there already.” “No, we want your visual learning style.” Well, Chandra delivered and people are loving that. You can check that out on the website, but for people that are preparing for the CPC, just stay on track with your textbook and doing the Blitz, use the BHAT® system in your books, and do your timed practice exams. That’s the formula; follow that formula and you will pass.

Chandra:  The only thing I want to add to that is, as far as changes from 2016 to 2017, I wholeheartedly agree with you, Laureen. That’s typically AAPC is just looking to make sure it still works, what questions they need to be removed and then they’ll add some new ones to replace those, whatever it may be. For those that are in the midst of studying or those that are familiar with coding already, but are finally looking to get certified in 2017, there is one guideline, one, that I want you to pay particular attention to. It’s actually a coding convention for ICD-10, and it’s “with.”

Because prior to this year, we were not allowed to make any assumptions about conditions being related; if it said hypertension and heart disease, we could not assume it was hypertensive heart disease. The doctor did tell us that there was a link, either say hypertensive or heart disease with hypertension, something like that. The way that the guidelines have been revised for 2017, they actually now say that if two terms are linked by the use of the word “with” in either the Tabular (that’s easy) or the Index, that opens a huge can of worms that we’re allowed to assume they’re related. So, now, if there’s an option under hypertension for “with heart disease” we’re allowed to assume and code them as though they are related. So, that is by far one of the biggest changes we have seen to diagnosis coding guidelines in the last 10 years.

This segment “Are New ICD-10 and CPT Guidelines Included In Current AAPC Exams?” originally aired on Live with Laureen #013 on January 5th, 2017.