The next question I was going to answer is on Pathology Consultation Coding. We had a student that was struggling with this question from our practice exam and it says:

Q:  “During surgery to remove a malignant neoplasm of laryngeal cartilages, one frozen section is sent for pathological consultation to confirm the adequacy of the surgical margins. A second specimen required frozen sections on two tissue blocks. What CPT code(s) are reported by the pathologist?”

Let’s take a look… What I did is, this is just a little copy and paste of my CPT manual. Part of the techniques that we teach at CCO in the CPT manuals is bubbling and highlighting and note writing to make the guidelines jump out at us. 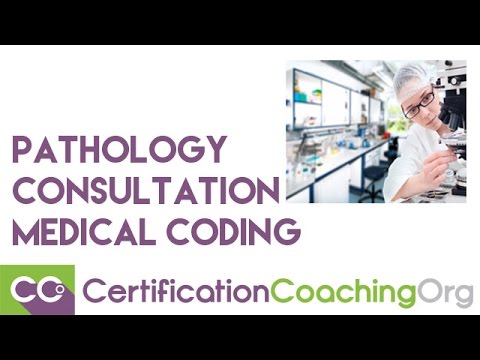 Here is my pathology consult bubble starting with 88329. You’ll notice indented underneath that 88331 says “first tissue block with frozen section.” Then we’ve got the add-on code “each additional tissue block with frozen section.” Now, I have the plus sign circled and aiming up at the 331 because if you look at the parenthetical note, it says that 88332 is designed to be used in conjunction with 88331. So, you would never have 88332 added on to another code. It has to go with at least one unit of 331.

Let’s break this down. The unit of measure with this type of codes is the specimen. That’s what we want to figure out first. Then, we got to figure out: was the specimen cut into x amount of pieces or not? That’s the way to view it. In this case, specimen “A” had one frozen tissue block. And we just go back up to review that. It said: “During surgery to remove a malignant neoplasm of laryngeal cartilages, one frozen section is sent… to confirm the adequacy of the surgical margins. A second specimen (we’ll call this specimen “B”) required frozen sections on two tissue blocks.” The tissue blocks are like a slice of the specimen.

Hopefully, that will help, gives you a little sample of bubbling and highlighting. I use a lot of food analogies when I’m teaching coding. We tell people, “Think of a specimen as a little meatloaf. The frozen sections are the slices…” it’s kind of gross, but if it helps you remember, then go with it.