Laureen: Alright, so now I’m going to jump down to – I think who’s going to talk about Healthcon? You would –?

Boyd: I would love to, yes!

Healthcon 2015 – I wanted to report in behalf of the team here our recent attendance over at Healthcon 2015 and CCO. I’m sure some of the people on this webinar were there; if you were, let us know, let us know. Give us a “1” in the chat and maybe a comment or two, if you had a head shot or something like that, dropped by our booth. These are some of the over 100 people that stopped by our booth here in the background. They’re blurred out a little bit that had stopped by our booth to get a head shot. Those will be going out actually in the next week. I hope, if it all set and done.

If you can go to the next slide Laureen, the highlights for me and the team here. So, we obviously had a booth, what was it like to have the booth guys, Laureen and Alicia?

Alicia: That was a lot of fun.

Laureen: A lot of fun, very exhausting, met a lot of great new people, saw a lot of old friends, it was really good; and my favorite part was getting to spend time with you two.

Alicia: We did, we really had fun.

Recent Attendance Over at Healthcon 2015 and CCO – Video 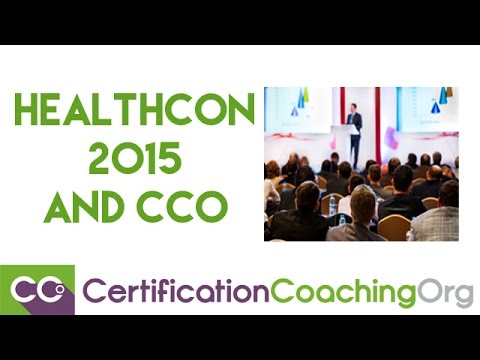 Laureen: We don’t get lots of face time; I mean, this is our face time right now, what we’re doing on the webinar. We don’t work in an office together. I’m in New Jersey, Boyd is in Florida.

Laureen: For a little while, she moves all the time.

Boyd: Yeah. And we’ve started a whole bunch of new things. We’ve done a lot of video capture, this particular conference, and there’s Alicia interviewing two of our fellow coders. You want to talk just really briefly about that, Alicia?

Alicia: Yes! One thing that we were able to do this year that we’ve never been able to do before was live interviews with people as they come by the booth, and Boyd made that feasible for us to hit that great microphone and we had a table there where they would stop and we would chat. Two people that I’ve gotten to meet from previous webinars, actually it’s not webinars, but at Healthcon conference, you know that’s what’s kind of fun about that and I think that Laureen would agree, you see the same people over and over again, they’ve made that commitment to their continuing education to always attend to these events. That was exciting! A lot of fun to get to sit and just chat with them and Boyd was able to get some photos and record some of that, and we’ll have that up for you guys later.

Laureen: Don’t get a selfie stick around Alicia or Boyd.

Boyd: Yeah, she was a monster.

Alicia: That middle one is a selfie stick shot that Laureen did. Yeah, we had fun with that.

Boyd: We were very proud of Alicia because this was her first presentation at the Healthcon conference at the national. I think Laureen should tell the story because these three shots are quite interesting.

Alicia: Yeah, those were after the presentation.

Laureen:   Well, I went to Alicia’s presentation and I took some photos and this is at the end when shewas all done. She’s like, “Yey!” and so I got to capture that and she was just like doing all the moves, I was ready for her to start doing the quarterback football spike. She did a great job, it was very well received. She got lots of positive comments and a lot of people came to booth after that to get to know her more and pick her brains. So good job!

Alicia: I can’t wait to do it next year.