Alicia:    And this is a very quick and easy one.

Q: Could you explain how to code for respiratory dependency?

Q: I have a coding question for work, I was considering if you could explain how to code for respiratory dependence?

V46.1 – Should this be used only for someone who is permanently on respiratory ventilator?

Q: V46.2 – Could this be used for someone with a condition such as sleep apnea? 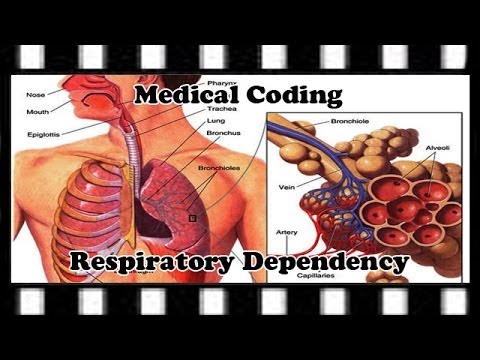 Down here, most people think that if a person is on a respirator or a ventilator that they’re bed-bound and maybe in ICU. You think, you see that picture of a person on machine and stuff, which is true, but in actuality a lot of people are respiratory dependent and it usually is involving quadriplegia injuries to the spinal cord.  Like this picture, this guy is actually ventilator dependent or respirator dependent, but he’s in a wheelchair moving around. There was also a picture of a girl that was going to high school but I couldn’t get it to load.

Now, the other code, V46.2, dependence on supplemental oxygen or long-term oxygen therapy that would go with somebody that had something like emphysema; in other words without having O2 on at all times, their saturation levels go so slow that they’re not getting enough oxygen. That’s where you get below like 93%. Some people walk around with 94% or 95%, which have asthma and I do; for some people that’s really bad, but for me it’s not. But, if you get below 93%, if you get into the 80s that’s really bad, and if you are consistent that way, then they may put you on oxygen. You see the people that walk around with those little O2 tanks, they are a V46.2 – dependent on supplemental oxygen. So, it’s two completely different things.

These are not first listed diagnoses, these are V codes that go along to help paint the picture for the care of this patient. It’s very pertinent for the patient to have these codes on there. Just about every time that they’re going to be seen, a V46.2 is going to be pertinent to their care, so that code will be used often with them.

I think that’s all I put on there; it’s really pretty short and sweet. Yup, that’s it. They are different, just make sure you understand the point one is for ventilator dependent, and point 2, they’re walking around with that O2 bottle, which is a prescription by the way. 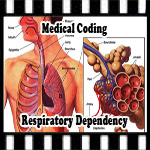