This was very exciting, so whoever submitted this question, I really appreciated it because after I did the research, I didn’t know as much or hardly anything about this subject. I particularly like cardiology.

Q: Can you review the LVAD/RVAD insertion codes for CV (cardiovascular) surgery?

A: Actually, when I first looked at that, I thought, “Oh, my word, I don’t even know what a VAD is” and then it clicked as soon as I pulled it up. And then, “Oh, yes, I know what that is.” 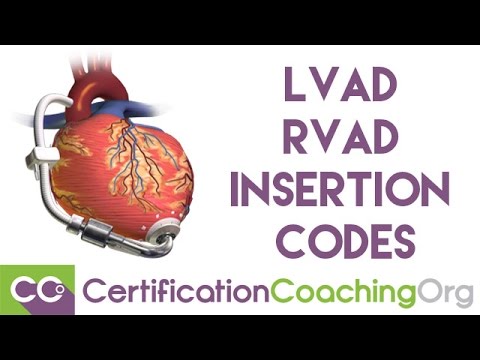 This first guy here, he is actually 20 years old, he was a professional athlete and he had a heart attack. So, you can see the surgery where they went in and I’m going to explain a little bit more how this is set up, but this was keeping him alive until he got a heart transplant.

This is what it actually does, you have this device right here that goes into the aorta and then down into the ventricle. This one is going into the left ventricle so this would be an LVAD (left ventricular assist device). Then, there is this supply line and it literally is plugged into a motor and there’s a battery pack, you have to have two battery packs. You walk around with this everywhere you go, 24 hours a day. That literally keeps you going, literally keeps your heart going.

This is called a “drive line.” It’s very important to know the drive line when you go to coding this, because there’s a lot of codes that surround the drive line and complications that can happen.

Now, that we know what the VAD stands for, you have a left and right, you can also have a dual one which they call a BiVAD (bilateral, left and right ventricular assist device). There’s just kind of a smattering of codes to go with this and when you look at them, you want to always pay attention to the first term after your code. Now, keep in mind, this is a temporary device. I did read to see how long somebody has survived with one of these. I can’t remember, I think it said up to ten years somebody survived. Can you imagine? But, you eventually get taken off of the transplant list. This is temporary, it’s not meant to be long term. This is to keep you going until they can go in and do whatever repair needs to be done or replace the heart itself.

The codes that the person was asking about were insertion codes. I went ahead and pulled out some of the other codes because they’re clumped in together. The first one, 33975 is insertion of the ventricular assist device (which I’m just going to say VAD), extracorporeal, single ventricle. So, just one side that the left or the right ventricle is being done.

Then you have insertion of a VAD for both sides, left and right, 33976. Then, there are a couple of codes for removal of those devices that we just talked about. And then you have this 33979 which is insertion of the VAD, implantable, intracorporeal, single ventricle. That’s where they’re doing something a little different. I’m going to explain that here in the future. Then, they have a removal code for that and then they have a replacement code for something going wrong and a part of the pump or something that needs to be replaced.

Now, there’s another replacement, not a big deal, easy to follow, some people get a little confused about what this extracorporeal mean, and it ultimately just means that it’s surgery. They’re doing something on the outside going in. So, intracorporealis going inside and doing and making any changes. But just think of it as surgery, that’s the best way to think of it.

Don’t confuse interrogation with insertion – at first I thought, “Well, nobody will confuse that.” And then I got to looking at the codes, I thought, “Oh, I can see how this could be confusing.”So, this interrogation of the ventricular assist device (VAD), in person, with physician or other qualified healthcare professional… But, they’re talking about the driveline. Remember I told you about that driveline, that tube, all kinds of complications can happen with that. It can get infected.

Think of somebody that has a stoma, we’re more familiar with stomas than we are of something being inserted directly into the heart and then them they’re using it all of the time. But infections can happen and injuries around that area where that driveline is going, you can have alarms and power surges. So, the review of device to function is part of it. They do flow and volume status, they do septum status and recovery. It’s amazing what they can plug these machines in and tell you about. Then, they’re doing programming and if that’s performed, they have reports and stuff.

But do not report 93750 in conjunction with those other codes that we talked about at the top because this is something completely different, this interrogation is not the same as insertion or removal. This is just going in and maintaining, I guess is the best way to explain that. If you have not seen anything on this, absolutely do a little study.

Real quick, I went ahead and pulled out because Find-A-Code has amazing they call it “plain English interpretation” of what’s going on. I pulled this off of there. It said: “An in-person interrogation and evaluation of a ventricular assist device (VAD) with physician analysis, review, programming, and report is performed” – which we already said that.

Then it goes on that it “may be performed on a routine basis or when the patient presents with symptoms or complaints that might be due to device malfunction or to a change in cardiac function” – so, once it’s inserted, it’s done. Then you’re going to start using this interrogation code unless they actually go and remove something or replace part of the devices. Again, keep those separate.

The physician reviews interrogated data from the VAD function and the current programmed parameters and they can set it up to do what they want it to do. This is kind of like, it’s not really the same thing, but think of a pacemaker on steroids, this does a different function, but that’s mainly what it’s doing, it’s keeping that heart going. “Parameters analyzed include drivelines, alarms and power surges. Device function is evaluated for flow and volume status, septum, status and recovery.” Those are all the things that it assists with.

Again, there are lots of reports that go along with this as you can imagine. One of the things I like to always mention in explaining some of these, you think, “Why don’t they just have one code that can take care of putting them in, taking them out, stuff like that. Why do they have to have multiple codes? Why do they do all this reporting and stuff?” Because you as a coder, what you do is based mainly on for statistical purposes; what you do now changes the future.

This is an  amazing device that I honestly don’t know how long it’s been around. I didn’t get that far into my research, but fascinating. When you have a little bit of time and you wanted to look up some stuff on the cardio, look into this, they even have lots of pictures on Google image on these actually being put in. I didn’t torture you with any of those tonight, but know that they do this for neonates all the way up to geriatric ages, all different ages. That’s it, guys, very exciting.