A: Now, you guys, I really like status codes because that’s ICD-9 stuff, that diagnosis that I love so well. You’re going to find these in your ICD-9 manuals, and what status codes do is they indicate that the patient has either, is the carrier of the disease or they have a sequela or residual past, a disease or condition. It’s just an informative code that gives you the status, the course of treatment or an outcome. These are going to be V codes. Now, if you want to find these codes, you’re going to look up in your index, in your ICD-9 manual under status.

Here’re some examples of some. When I read this off, I’m not going to read the code, I’m just going to go ahead and read what they’re for; but you can see these people that are [? 0:41:18] with this now. You can see them and think about how they would affect the care of that patient. We’ve got an ankle prosthesis, a colostomy – you see that one a lot, because think about that, if the patient has a colostomy, again you’ve got all kinds of care that revolve around that, not just with that diet that’s determine stuff.

Medical Coding Classes Online – What is a Status Code? – Video 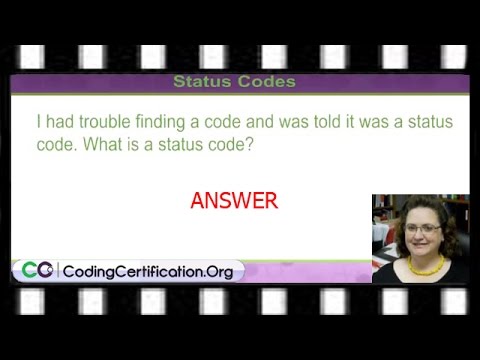 We’ve got breast implant removal, bariatric surgery – you know when that first came out, they wanted people to have an ID, badge or a necklace saying that they had bariatric surgery, gastric bypass. Because if they want to push medications or sometimes even if they’re going to – I’m trying to think something else off the top of my head, I can’t. They just need to know if your stomach is surgically altered, your body absorbs medications and stuff differently because your intestines have been bypassed, again, giving medication orally can be affected by that.

Cardiac pacemaker – Whenever you walk into radiology, what is the first thing they ask you? They ask you: do you have a pacemaker? And if it’s a woman: can you be pregnant? What about a ventilator? Again, some people think, well, they see the ICU room and they think to be on a ventilator, you have to bed-bound. That’s not true. There’re people that are in wheelchairs that have ventilators, and I saw a picture one time of a girl that was actually taking a college exam that was on a ventilator, and she actually had [? 0:43:03] I don’t know what her condition was, but for some reason, she had a ventilator.

Lower limb amputation – This one is huge when you’re doing things like auditing and HCC coding. If a part of the limb has been amputated, that is going to affect care especially if your patient is a diabetic and they’ve already had a limb amputated. Lower limbs, they’re going to want to know you got additional digits here that you’ll be using to let them know if it’s above the knee or a below- the-knee amputation.

Long-term (current) drug use – The big one that jumps out here is insulin. You got a type-1 diabetic; you don’t have to use this code because you know they’re going to be on insulin. Now, if it’s a type-2 diabetic, however, they could be controlling their blood sugars with diet and exercise. They could be on oral medication or they could be using insulin.

And then, again, there’s chemotherapy. I’ve found this picture of a guy; he’s got a below- the-knee amputation here. When you see that picture you know his care is going to be different than somebody that has both legs. [Indiscernible – 0:44:24] to put pressure, not having to pump through both limbs.

Anyway, those are status codes. The best way to make yourself aware of them, go look up status in the index of your ICD-9. Go find these V codes, they start around V43 or 42, and then just read through them. Be aware that they exist. That’s the best way to get through them. You’re trying to find code and you can’t, you think, “Wait a minute, could this be a status code?” And the term to look up is “status” and the doctors are probably going to use the word “status” in his documentation.

Get More Details about Medical Coding Classes Online – What is a Status Code?