Q:  [Transbronchial Biopsy Medical Coding] – How would you code a transbronchial biopsy of the left lower lobe of the lung with BAL washings, but with no lung tissue identified on the pathology report?

A:  The first thing is, what’s a BAL? It’s a bronchoscopic alveolar lavage. So they’re basically sending some fluid in there trying to get some cells, they aspirate of they suck off to go diagnose if there’s any problem. This is a diagnostic procedure.

If you want to learn more, go to the Olympus-ME website. On there they said that BAL aims to establish a diagnosis and to find out if there are infections or malignancies – it’s amazing what they can do just by getting the cell washing – and present and to estimate the degree of disease activity.

Fluid is introduced into the terminal bronchioles. That’s what you’re seeing here. So this tube comes down, it goes down pretty far, and then recollected for analysis to examine cells, inhaled particles, infectious organisms or fluid constituents.

Now, what is the code? The code is 31624 – Bronchoscopy, rigid or flexible, including fluoroscopic guidance, when performed; with bronchial alveolar lavage. That’s the code that basically describes what the questionnaire was asking.

But let’s take a look at what it looks like in Find-A-Code. Find-A-Code is one of our preferred encoders that we use. What I love about this is the plain English description, so it’s really giving us in layman’s terms what’s going on. It says: “A rigid or flexible bronchoscope is inserted through the nose or mouth and advanced into the oropharynx with or without fluoroscopic guidance.” 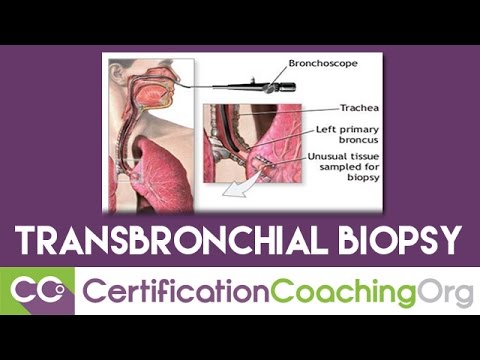 Fluoroscopic guidance, by the way, is if you think of the 3 Stooges in those episodes where they would run behind the x-ray screen and you could see their skeleton moving, that’s fluoroscopy. It’s a moving x-ray instead of the static picture. And they use that to help them locate where they’re putting the bronchoscope so it doesn’t damage going down.

Think of like this hard tube, but they can put the flexible one inside of the hard tube to go down into the real deeper recesses there.

Then it says: “Bronchial alveolar secretions from the lower respiratory tract are obtained by BAL, the bronchoscope is wedged into the sub segmental bronchus containing the lung lesion. If diffuse lung disease is present, the scope is wedged into the right middle lobe bronchus. Sterile normal saline is instilled through the scope and aspirated back into the specimen trap using suction.”

Here’s a great picture, another feature of Find-A-Code that we like. Here it’s showing it from a different perspective than the one I showed earlier. You can see the bronchoscope; it’s inserted through the mouth or the nose. They examine the pathway all the way down and then they do these washings at the end. That’s what that procedure is and how it works.

So to code this particular situation, it doesn’t matter that nothing was found. Because she was asking they didn’t find anything wrong. It was a diagnostic procedure, so it was negative, which is good for the patient. The fact that they didn’t find any pathology, you would still code a CPT code, 31624.

From a diagnostic standpoint, I didn’t really have enough information as to what the physician, why they ordered the procedure, so I’m assuming that the questionnaire was asking about the CPT procedure. So, that’s the BAL. 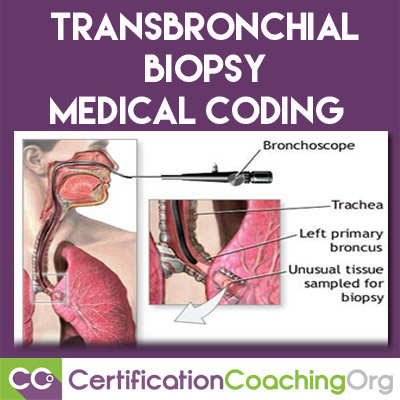