JoAnne:  Q: Can you elaborate and give tips on Radiology Coding – CPT Codes for Radiology?

A: Diagnostic Radiology does include many services and these services can include your basic plain film x-rays, diagnostic ultrasounds, CT scans, MRIs, mammograms, diagnostic nuclear medicine and PET scans.

When a coder is coding for Radiology, specific information has to be provided to the coder. We want to know the name of the study that was performed, and you want to pay attention to the number of views or sequences. For example, if a doctor does a radiological exam on the hand and it’s only 2 views, you want to make sure you pick that CPT codes because there’s one for 3 views and so forth; so you want to make sure that matches up. 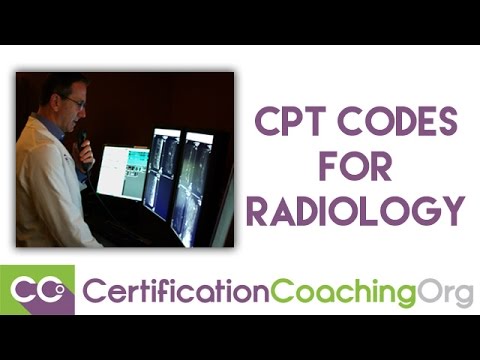 Then of course the reason for the CPC exam, being medical necessity, and the findings, impressions or conclusions of the findings is the definitive diagnosis basically which you would link to the radiology procedure. Then of course the provider signature must be on there. If there are any plain films or any print out of the diagnostic studies, that would be copied into the electronic medical record to have, the coder would be able to pick out exactly what was the form.

But the most important facet of the radiology is understanding the global, professional and technical components because most radiology procedures include both a technical and a professional component. Coders need to know when to report these technical, professional and global services. This is not so challenging once a coder is established in a particular health care establishment, because if you work for a hospital you’ll know what you have to do. If you work for a physician’s group that has the equipment and does everything, you’ll know how to bill.

For me, years ago, I worked for a mobile diagnostic ultrasound lab and they strictly did the technical component. When you bill for a technical component, that’s the most expensive portion of the CPT for the billing, so for example, if I did a 76801 an ultrasound of the pregnant uterus real time with image documentation, fetal and maternal evaluation, as a technical component, which is what I did, I would bill the 76801 with the modifier TC meaning, Technical Component. Approximately, give or take the type of test, $353 would be reimbursement.

Now, when we get that information and it’s provided to the radiologist, they interpret all of that and that is considered the professional component and they do a write-up which is presented to the doctor and their reimbursement is much less. Now if you go to a medical practice, like I said, that has the equipment and they actually do the technical and they do the interpretation and supervision, you don’t need a modifier. All you need is the basic CPT code and then you will get reimbursed for a combination of what the technical and professional split up as.

Laureen: So your freestanding radiology clinics would not need a modifier because they own the equipment and they employ the radiologist.

JoAnne:  Exactly.  And really, it can get confusing for patients sometimes when it is split up, it’s definitely cleaner when one clinic does it all, so to speak, because they do get confused with they’ll get double bills if they’re co-insurance and things like that, because, “Why, I already paid this,” when it’s actually two separate things.

The Technical Component is actually the part that includes the equipment, the supplies, the technician, and any costs related to the performance of the exam. So it’s actually the actualperformance of the ultrasound that the technician gets paid. The only exception to this rule, and this is something that always jumps out at me especially for people studying for the CPC, that: For services performed in a hospital, it is assumed the hospital is billing for the Technical Component of each study and that’s the facility billing end of it; so hospitals are exempt from reporting modifier TC. A lot of times when we see coding and you say it was done in the hospital, but why am I just using modifier-26? Because that’s the physician component, the interpretation of supervision, if it’s in a hospital setting, they take care of the technical.

The Professional Component, it includes the physician work in providing a dictated report or interpretation, or dictated report and supervision. To report only the physician portion of the service, you would append the modifier 26 as the Professional Component. That should be the first slot of the modifier in the event other x-rays were taken at different parts of the body. You want to make sure that that’s the first sequenced modifier at all times.

A Global Service just takes in all of that both, the taking of the x-ray or whatever, as well as the interpretation. That’s very important, and of course again, you match the number of radiology views provided and match it to the CPT code.

When you’re reading notes, you want to know the difference between a Scout View and Contrast Studies and that’s really big. A Scout View is a preliminary image obtained prior to performing the major portion of a study. It may be referred to as a KUB (Kidney, Ureters, and Bladder). The physician has to document that that film was taken, and he must dictate any findings from the film separately.

Understanding a Single Contrast Study, as an example, is when the colon is filled with barium swallowed by the patient, which outlines the intestine and reveals large abnormalities. Then, the Double Contrast Upper GI Study, the colon is first filled with barium and then the barium is drained out, leaving only a thin layer of barium on the wall of the colon. The colon is then filled with air. This provides a detailed view of the inner surface of the colon, making it easier to see narrowed areas, also known as strictures, diverticula, or inflammation. That’s all relative to when you see the name of the study and then you see what’s been done, that’s how you find your actual CPT code.

The exam has to be complete; all documentation must be complete. It must be indicated as complete. There are certain studies that have additional strict documentation requirements to code for a complete exam. You can get that on the Medicare website or you can Google any insurance company or just plain Google it, if you have to, and you’ll get the information that’s required. That’s pretty standard.

One of the questions that seemed to be a problem for a lot of people studying for the exam and even those that are CPCs is that they get confused with the contrast. If a patient receives some type of a contrast orally or rectally, that does not count as contrast. This really happens a lot, we want to pay attention to the wording: oral and/or rectal contrast is NOT billable as a “with contrast” study. To report contrast, the technique section of the dictated report must state, “with IV or intravenous contrast.” That’s really important because I see that question pop up a lot about CT scans and oral ingestion of whatever and people get it wrong all the time.

Laureen: Well, it’s hard for us because we see in the documentation it says contrast, so we want to codeit with contrast, but the guidelines state that oral and rectal, as far as coding goes, does not count as a study with contrast. That’s just something that you have to commit to memory, you can’t even write it in one magic spot in the book… like you’d like to do.

JoAnne: Right. The last thing is that there are some studies, such as the Diagnostic Nuclear Medicine Studies and Positron Emission Tomography (PET) Studies. When you are billing for those, those studies do not include the radiopharmaceutical supplies, so hospitals and privately-owned nuclear medicine and PET departments/offices SHOULD REPORT the radiopharmaceutical kit utilizing the correct supply code(s).

I should have put here, you would get that out of the HCPCS manual. That’s very important because there are some things that are bundled into a study; however, in this case, these two tests in particular you can bill for the kit and that would be in the HCPCS code.

Laureen: And nuclear medicine supplies are really expensive and that’s why they’ll make sure that you’re definitely coming in the next day for that study because they got to open it up and prepare it. It’s like thousands of dollars sometimes.

JoAnne: The practice is putting that money up front for all the supplies to do this and then it’s not billed out. That’s how practices and clinics and such lose money. Basically, that’s it, but mostly it’s the Technical, Professional and the Global where people get confused and the contrast for oral or rectal with the CT scans. That seems to be the biggest issues of all. That’s pretty much it. Laureen: Very good. So technical, you can think of it like a math equation: Technical + Professional = Global.

Laureen: What gets confusing with hospitals is that they actually use two different bill forms. The use one bill form for Technical and the 1500 for Professional; so you would think that a hospital if they employ the radiologist, they could bill Global, but they can’t because they have to use two different billing forms so they end up using modifier-26 on a 1500 form for reporting Professional services if they were entitled to bill it. A majority of the time, radiologists are not employed by the hospital. The hospital just bills their Technical form, their UB and they’re done with it.

JoAnne: Yeah! Then the radiologist is separate and everything is sent to them and they do the interpretations and write out a report and send it to whoever needs it. That’s where they can bill for the modifier -26, and so basically that’s that.

Get More Details About CPT Codes for Radiology 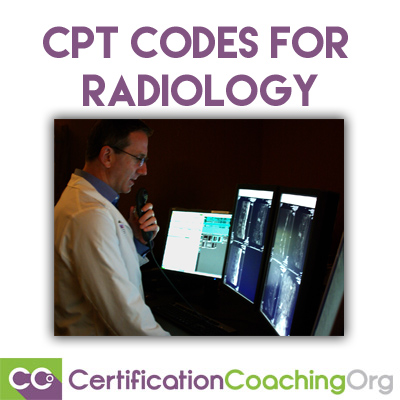