Q: I need help in understanding how to code the following: These are three diagnoses – the way I took this question. Three diagnoses on one encounter, one patient. The three are:

A: This can be very confusing – the acute and the chronic – especially when you got a disease process that is so similar. What I did was I took the two codes and just put them up here. So,

The point that I think that will help the coder that is asking this, is understanding a little bit about the disease process. First of all, you might wonder, “Well, how come we’re not coding COPD, because that was the first thing listed?” Actually, when you have these other two diagnoses, if you note down where… this is what you get when you look up – COPD 496. Down here on the bottom it states, “Note: This code is not to be used with any code from categories 491-493.” And both of those other codes are in that range, so we’re not going to code the COPD. We are going to code just for the asthma and the bronchitis. 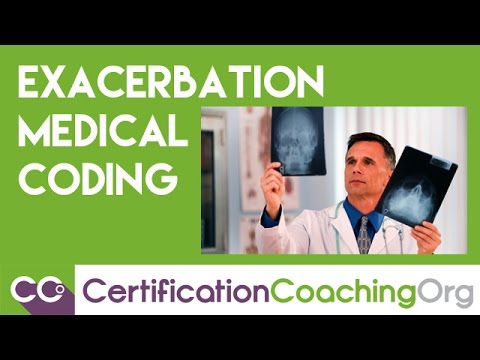 The question was: “How come we’re coding for both of those? How are we getting an acute out of a chronic condition?”

A: The fact is it’s very common. A chronic condition means that it just doesn’t go away. We always have it.

I’ll use myself as an example for this, because this is really is right up my alley. I’ve had asthma since I was child. Asthma is actually condition in which the airways, they narrow and then they swell. Then, what happens is your body starts producing extra mucus and phlegm because of the irritation and then you’re airway is just constricted. I would like to say – at a lower level down in your lungs.

It could be getting choked on something which happens to me. It could be walking too far or running and all of a sudden everything starts swelling up, because it’s a condition that you have.

It is actually two separate conditions and my asthma is chronic. Do I get a flare up once in a while? Yes, and that would be classified as an acute exacerbation. This happens often for me in the springtime just like everybody else when all the pollen starts to fall. Unlike most people that have just an allergy attack,I will have an asthma attack which means it’s not an inflammation. It just means that those passagesclose up and then because they start to close they produce mucus.

If you get bronchitis, you either got a virus or bacteria has gotten in there and then you have aninflammation – two separate diseases, so therefore you need two separate codes. Can you have one without the other? Yes. Can you have them both at the same time? Absolutely. I’m a living proof of that, because my asthma goes into my bronchial passages and then it gets irritated and then it gets infected because it’s raw and irritated and then you get bronchitis.

Yes, you do code both and yes you can have a chronic condition that’s there. I have all these little inhalers that I keep with me all the time that my doctor tells me and I have to use all the time.That’s to keep the passages open. So, I live with that, but if it gets irritated, thus “itis” then it’s a different condition. Can I have an exacerbation? Absolutely, at any moment. Something could trip it off and I could have one right now in front of you. How exciting, but I won’t do that for you for the webinar. It would freak Boyd and Laureen out. That’s why you have the separate codes. Very exciting, isn’t it? That’s it guys.