Alicia: Okay, omit codes. I had to think about this for a little bit and I actually sent a message out to a couple of my coder friends who have been coding a lot longer than I have and who have also done inpatient coding. And got a really good response from this. The question was, “Can you please explain the use of omit code in the ICD 9? I just don’t get it. If we’re not to use the code then why do they have it in the book? This is what I’m thinking it means. Can you confirm or tell me what it does in fact mean? The example in volume 3 ICD 9 Hospital Procedures 39.3 suture of a vessel. Then under that is it has an exclude note and under that, an omit code and it lists other codes which there’s the… those are all procedural codes for inpatient coding. Does it mean that if I am coding anything from this list that I should not code anything in 39.3 category as well?”

The Use of Omit Codes in ICD 9 – VIDEO 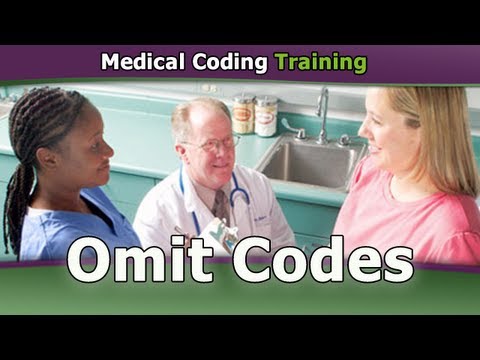 So I got a great response from Lisa who is one of the HCC coders. They’re training with me and she has a lot of experience so a little shout out to her. What she was telling me is that when you’re dealing with omit codes you see them of course, mostly in volume 3. And for all of our PBC students, your step by step book, I think it’s in chapter 8. They will mention volume 3 codes because the step by step book that we use actually has the chapter inpatient coding. So they’re going to you know, teach you that. But we just don’t do that because we’re doing physician-based coding. We don’t you know, so you’re not missing something in your ICD 9 manual because you don’t have volume 3 in there. You have the physician based manuals, not the hospital based.

So, inpatient procedures. There are a few omit codes for actual diagnosis codes but even though those are few and far between and usually have V codes. So the example here was V49.87. You would omit this code and not use it if we, the healthcare provider, put restraints on due to a procedure.

Okay so in other words, like Laureen had said before, it’s bundled in. You know, if you have to restrain a patient because that’s part of the procedure that they’re doing, you’re not going to code for that. So you’re going to omit V49.87 which is actually putting on restraints. Does that make sense? You know, you don’t need to code it because it’s included so omit it or leave it out.

Now if somebody was going in and having something done and they put them on this temporary pacing system, 37.89 would be used because it’s not bundled in. So this applies to things like when you’re taking your classes and you’re doing modifiers. You know, you go back to the fact that if somebody’s having a bilateral procedure done and the code says it’s a bilateral procedure, you wouldn’t use modifier 50 because it’s redundant. So in other words, they’re just saying you know, an omit code is saying it’s redundant.

So when you… outpatient coders, they’re in the bundling like that. You know, they know. You look for description and if it’s bundled in, same thing like with the cast you know, that Laureen talked about. They put a cast on. Well, you don’t have to charge for putting the cast on. That’s part of what they did.

The inpatient coders, now they don’t.. you don’t bundle as much as you do an outpatient. You do everything kind of line by line. So they… like she said here, you broke everything down with all the codes you could. Now with the omit codes, you’re beginning to see a little bit of the bundling mentality. Usually, the omit codes are for some type of action that allowed the real procedure to take place while ensuring the patient safety, thus the system on the… the pacing system for the pacemaker.

But… so when you see that in your ICD 9 books though, when you see omit, that’s just another guideline to follow like code first and code in addition. So they’re just telling you, you don’t need this code because… and it’s not necessarily something that’s a scary thing. And if you’re an outpatient coder, you’re probably not going to deal with that as much.

But if you want to get into inpatient coding you know, you may see that where they’re telling you specifically. But you have to keep in mind, outpatient procedures, they’re heavily reimbursed on CPT codes whereas inpatient coders are heavily reimbursed on ICD 9. And you want to code everything you possibly can that’s wrong with that patient so that you get more reimbursement. And that’s the thinking behind that.

The Use of Omit Codes in ICD 9 Related Posts: 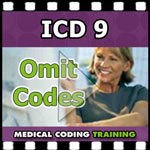