E codes. They’re so much fun. A lot of people get confused about E codes but it’s not really that big of a deal once you start playing around with them a little bit.

The mystery behind E codes. What are E codes? Okay now, like I said, E codes can be a lot of fun and in fact, you’ll hear people joke around and say, “There’s a code for that.” You know and if my husband has an (1.00.53) pain, sometimes I’ll say that and he gets annoyed. But it’s true. If something happens to somebody, there’s probably an E code for that. The actual section is supplementary classifications of external causes of injury and poisonings. And they go from E000 to E999.

Now, put that in layman’s term, what that means is you’re going to be able to describe events and circumstances that cause an injury. Now why would you want to do that? For one thing, a lot of people forget that coding originally was set for statistics. That’s why we know how many people have a certain type of cancer in a specific area in a given year.

Video: What are E Codes? 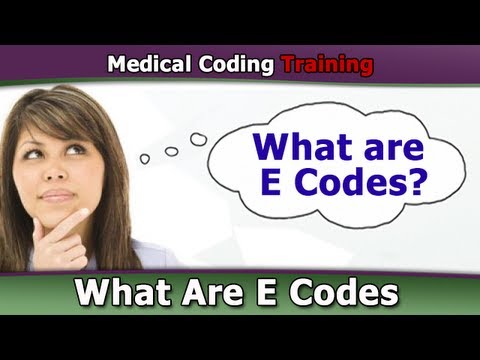 Now statistic-wise, think about this. How many people were injured in a car accident last year? Because there’s E codes specifically for car accidents. Now, you can even break it down with E codes and fine tune them a little bit more. The nature of the injury can be defined by the possible extent. Okay so you have an auto accident. The person was a driver and they hit the guard rail. Or another E code will be the same thing, auto accident, driver and they hit a head-on collision. Now if you’re thinking about what type of injuries that are going to go along with that person, hitting a guard rail versus hitting a head on collision with another vehicle, head on collision’s going to have more extensive damages.

Also, a driver versus a person that is in the back seat or a passenger… now with airbags, it’s not a big deal. But in my ER days, one of the first things the ER doc wanted to know was were they the driver? And that’s because if you’re the driver of an auto accident, the steering wheel’s going to hit you in the chest and you’re going to have things like… you’re going to have tamponades and all kinds of real exciting things going on in the chest. If you slammed in, it’s called a pericardial tamponade or something like that. And so that’s just something that he needs to know. So the… when you go to a subsequent visit, that person can look on there and say, “Oh okay, we’re doing a follow up because this person got hit in the chest by a steering wheel because they were the driver of the accident.”

Now, something to note about E codes, you’re never ever ever ever going to use them as a principal diagnosis. They describe the circumstance around the injury, not the nature of the injury so keep that in mind. If you see that on the CPC exam and E code first, just mark it off. You don’t even have to look at that one anymore.

A few things to also keep I mind, they are not used in subsequent encounters. So if a person comes in to the ER and they were in a car accident and they you know, ran the steering wheel in their chest and they broke you know, 5 ribs. Now when they go to their doctor for a follow up visit or a follow up x-ray, they don’t care about that E code anymore. That E code is not going to be appended in those codes anymore.

Also, you can use more than one E code at a time. Some people get confused thinking, “Oh well, I can only use one.” No. Sometimes, to describe what’s going on, you need more than E code.

Another thing to keep in mind is that there’s a separate alphabetic index for E codes. So when you go in and you look in your index and you’re trying to find an auto accident, you’re not going to find it because they have their own index.

Now, pay attention to the includes and excludes in the E codes. That’s what’s fine tuning to make sure you’ve got the proper code. And they could be kind of humorous. So you know, you could have a lot of fun with them. There’s actually a YouTube video… some people do that and I think Laureen knew who they were. I came across them not too long ago and she’d already heard of them. And I think it’s called something ilke you know, there’s a code for that or I can code that. And actually take these funny YouTube videos with people falling and running and…

Alicia: And then they put the E code up and it’s hilarious. And actually, this next month for our local chapter meeting, we’re doing a study on E codes and we’re going to do E codes involving Christmas like you know, Santa got… or grandma got run over by a reindeer and Santa slipped on the snow and ice because there’s codes for that, you know. So have fun with them. If you need some extra reading time, just go read your E codes. They’re a lot of fun.

Laureen: And one of my helpful tips is I personally can’t stand the E code index because I don’t feel it’s in normal language. For example, a kid fell off their bike. You would be looking for bicycle or something in the index. Well, they call it a pedal cyclist. We don’t talk that way, you know? So…

Alicia: Yeah, I don’t usually use the index either. The E code section is not very big and once you get the hang of it, if you can almost flip through the pages and figure the out faster than looking them up in the index.

Laureen: Right. Now there is an Appendix E which is easy to remember because we’re talking about E codes. And what that is it’s a collapsed view of the 17 chapters and the V code and E code chapter. So it only goes to the 3rd digit category level. It doesn’t get into the 4th and 5th digit. There’s no includes and excludes. I really encourage you to go look at your Appendix E and go to the end where the E codes start. And because ICD is a classification system, it has to fit in the right category. And when you start skimming that, youc an quickly find what 3-digit category you should be in and then turn there in the tabular for E codes. And you will be much more succesful at your E coding than trying to use the E code index, in my opinion.

Alicia: And you have to keep in mind that there wouldn’t be an E code if somebody hadn’t done it. That’s what’s fun. 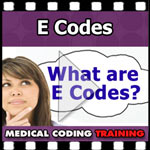