Q: I pulled this scenario from E/M university and would like to know why only one bullet was credited for the cardiovascular system.

A: This is a scenario that someone got from the E/M university – and I believe that’s an online coding site – and would like to know why only one bullet was credited for the cardiovascular system. Again, this is E/M, this is Laureen’s baby, but I’m going to do my best to answer the question.

This is the scenario that they were given – again, normally we don’t go in and answer questions from other sites. We like to say “What did you think,” then we can maybe explain why you’re on track or why you’re off track to help build you up, but not… Just in case this is somebody’s E/M university and I’m not familiar with what they are, but in the event that this is a test, then I don’t want to be answering it for you. [Laughs] 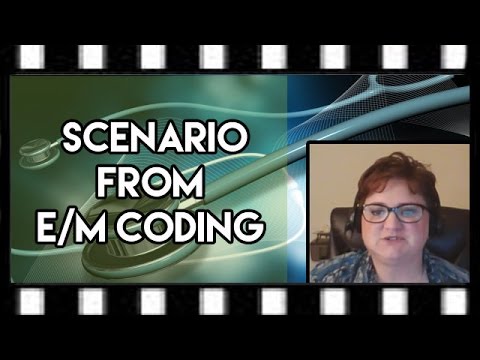 Let’s get to it. We have vital signs, we have general appearance and then it goes down doing… this portion shows the body system. This is a full report, mind you, they’ve just taken this one section of the report. The lungs are clear to auscultation. I went ahead and highlight this because I think this is where the question is coming from and I thought I’ll do a little education on…. The CV means cardiovascular, the RRR stands for regular rate and rhythm. Nobody ever spells any of that stuff out. If you can make an abbreviation, they will do it. No MRGs means murmur, rubs or gallops. And again, these are sounds and things that the physician would listen to, so this is part of the physical exam not the review of systems, but the physical exam of the patient. Normal carotid upstroke and amplitude without bruits – which is the sound that they’re getting in the arteries.

The abdomen – again, most of this stuff is… she was asking specifically about cardio, but abdomen is soft, non-tender, no masses or HSM. Extremities: No peripheral edema or digital cyanosis (which means her fingers aren’t swollen and they don’t have blue fingernails). Skin: No rash, lesions or ulcers. Skin is good. Psych: Alert and oriented to person, place and time. Sometimes they’ll say: alert, oriented x3 (which means person, place and time).

Their question was: How come I only got one for the cardiovascular when they listed all of these things? Well, usually only get one in a body system. But, here’s what I found that I think will help explain how that is done in the EM Coding. The answer is either going to be 1995 or 1997 guidelines, and you can use one or the other when you’re doing E/M services. You get to pick. The main difference between them is the leveling of the exam component – which is exactly the part that she’s asking about. You want to use the one that is most beneficial to your provider, of course, and you’re free to use ’95 or ’97, whichever works best for your provider. However, if you have a specific payer that wants you to use specific guidelines or one or the other, you have to do what they’re going to require to get paid. Simple as that.

That’s why you’ll hear people that are instructors saying, “I’m telling you this because this is what you need to know because CMS says that you have to know it this way, and that’s the way it will be on the exam.” However, when you get in the real world, Blue Cross Blue Shield likes it done this way or Medicare requires that you do it this way. They don’t care what CMS says, they want you to do this way. If you want Medicare to pay you, you do it that way.

Pros and Cons of Using ’95 and ’97 Guidelines: ’95 guidelines are kind of lacking in specialties. So, if your doctor is a specialist, then again ’95 may not be as generous to your physician. ’97 guidelines are lacking in that it requires a lot of specific documentation elements. Again, if you’re a general physician, PCP or something, one or the other will work out best for you. Most carriers require you to work with either the body area or organ system, but not both.

’97 guidelines use bullets. And that’s what she was using, she was bulleting each one of those to get points for them. You need: 1 bullet for problem focused, general multi-system exam, 6 bullets for expanded problem focused exam, 2 bullets in at least 6 organ systems/body area, or 12 bullets in two or more organ systems or body areas for a detailed exam.

Ryan can tell you that this sounds confusing but after a while it just becomes second nature to be able to do these. And you got a graph, you’ve got a little table that you can go in and some people would laminate them and they can use one of those dry erase markers and lick, lick, lick, and count it off, and that’s the code to use. People who like to do that make very good auditor.

NOTE: Physicians should never document “Just One More Bullet” to achieve a higher level of service. And these are all written… this is all information that you can get in your guidelines from your book. It’s also in the AAPC textbook that we use, but this part right here – physicians should never document “just one more bullet” to get a higher service level. I’m wondering if that isn’t what they were trying to show here. That doesn’t give me the whole scenario, so again, I’m kind of guessing at what they were wanting to know. Laureen is our expert on E/M leveling. If you have trouble with E/M, you might want to look in to the CEU package that we have for E/M, which is fantastic. That’s how I got better at doing E/M, was doing Laureen’s and I got better at explaining it to the students that I had at that time at the college.