A: This is an interesting thing. I have a major hat tip to Ruth Sheets on our CCO team. Ruth is one of our behind-the-scenes folks, I call her, and she’s like our fact checker. But she has been very instrumental on all of the practice exams that we have now at CCO. She oversees the project to make sure they get updated, so it’s a big job. And right away, she noticed that something was missing in the HCPCS manual for 2015 from AAPC, and that was the ambulance modifiers, they were gone. And she’s like, “Was there a change?” I’m like, “I don’t think so. I didn’t hear anything” and I’m Googling it, like I always do when I have a question, I ask Google, and could not find anything on it. So, we reached out to the AAPC and we got a response back; and sure enough, it was an oversight it was a publication error.

Poll – Did you purchase your 2015 HCPCS manual from AAPC? I’m just curious to see how many people did. It’s either “yes” or you’re planning on it; or “no” you ordered elsewhere. Just out of curiosity. And while you guys are answering, I’m going to flip the answer sheet here… 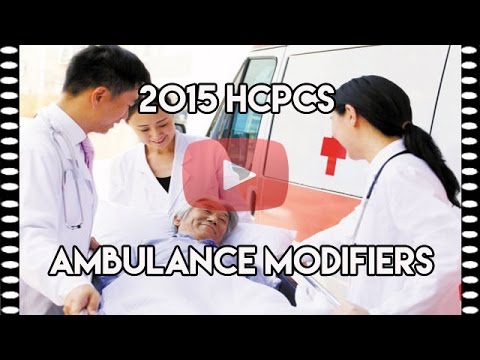 So, 50-50, so this will be of interest to half of you. This is a cut and paste from an old manual of mine where this is what you’d normally see in the HCPCS manual when they’re talking about the transportation services with the code that start with an “A.” When I’m teaching this, I basically say, “How many digits are modifiers?” And you think of them, and you normally say “Two digits.” So, the Ambulance Modifiers, they’re single digit that you add together to make it a two digit modifier.

So, for example, if you’re picking up a patient at their residence, their home, and the ambulance driver was taking him to the hospital. You would actually use the modifier on the ambulance code RH to indicate where you picked him up and where do you dropped him off. And I’m making it sound like a bus, but you get the idea. So, in the AAPC version of the HCPCS manual for this year, totally missing. So, I talked to the head of publishing in the AAPC and they are writing up an errata sheet, so that errata are the official paperwork, you can actually bring in errata and just put in your manual. Don’t staple or paste it or anything like that, but if it says official errata on the top from AAPC you’re allowed to bring that into the board exam. But, it’s not a huge list; you might just want to write it in. I’ll leave it up to you.

But, we just wanted to alert you to that fact if you’re looking for it, if you’re doing practice exams for 2015 and you have the AAPC manual, that you don’t pull your hair out looking for these. So, you can copy and paste these from the previous year, wait for that errata sheet. When we get it, we will be sharing it on our discussion board; another good reason to hang out with us at /forum. But, thank you Ruth for that.