Tammy: Q: Being an Auditor — “I’m a coder, but I was wondering what is different about being an auditor, and if I decided to pursue that area, what would I need in order to be one? Do I need to be certified for that too? Do I have to have my CPC certification first?”

A: First of all, we answered it when Laureen gave the survey that was done on salaries. Being an auditor pays more than being a coder, so if you’re pocket book is important to you and you’re interested, then yes, that’s the way that you would want to go. I can guarantee you that I became an auditor for my pocket book, just saying. I like my pocket book. So, I did become an auditor for that purpose, doing that.

Some of the biggest differences in being a coder and an auditor – first of all we aren’t there to code every day. That’s not our purpose. Our purpose as an auditor is to review what has already been coded and to look for any type of compliance or coding issues from the records that have already been coded. It’s also an educational job where we need to make sure that we are guiding whoever it is that we’re auditing with whatever is needed in compliance or in the coding arena.

Auditors can work in so many different formats. It’s hard to pinpoint just one, but basically what our job is going to be is just reviewing those charts, checking for compliance, checking for coding issues, and then educating the practice or facility where we’re at.

What is a Medical Auditor – Video 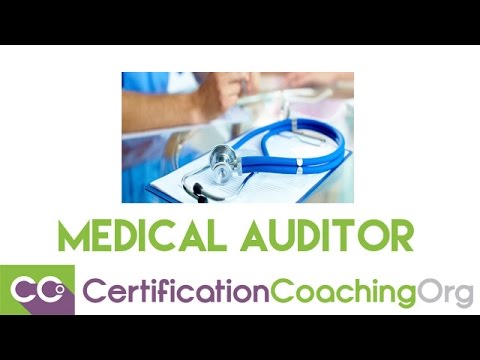 Getting certified in auditing would probably be a really good thing. It just adds credibility to you. I know people who aren’t certified as an auditor, but they’ve been auditing for years doing that.

So, it’s up to you. I would want to, which is why I have it behind my name, because it shows that I went through and I was trained to be an auditor that I studied these guidelines and that I know the compliances that we need to follow. Then, getting your coding certification also is a big deal because you have to know coding in order to be an auditor. How else are you going to tell who you are auditing whether they used something inappropriately or not if you don’t know how to look up certain codes?

We aren’t just looking up your one specialty. If you’re a pediatric coder now and you want to be an auditor, chances are unless you’re working for your physician and you’re out there and you go and get hired by another company as an auditor, you’re not just auditing pediatrics – something that you’re familiar with – you’re going to be auditing other specialties. I would definitely, definitely recommend getting your CPC, and then I would definitely recommend getting your CPMA. I think it will work well for you to do that. That’s it.

Laureen: I said Dawn, because I was replying to Dawn. Thank you, Tammy. Just to let everyone know we got lot of great positive feedback from Tammy’s students. They love working with her, having her as a coach, and she’s got lots of real world experience that she brings to the table. That’s always very valued.

Alicia: I asked her questions all the time.

AAPC – What is medical auditing?